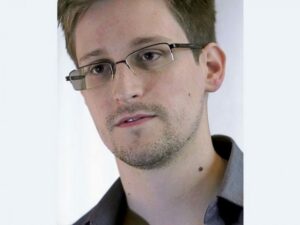 29 Oct 2020 – Edward Snowden has been living in exile in Russia since 2013 when he disclosed the American secret services’ programs of massive surveillance. The USA has requested his extradition for violating espionage laws. Today’s decision ensures he will not be extradited.

Snowden’s lawyer, Anatoly Kucherena, today announced the decision of the Russian government to grant him an open-ended residence permit. Russia had granted Snowden a residence permit in 2013, which expired in 2020.

Thanks to the information which Snowden revealed via a series of publications, we learned about the workings of the mass surveillance system of the USA and its allies, the cooperation of the big technology companies such as Google, Facebook, Yahoo, etc. and telecommunications providers in this monitoring, but also the cover-up of this surveillance through flagrant violation of individual freedoms and the American Constitution.

A few days ago, a US federal judge ruled that the American government could seize the profits of the sales rights of Snowden’s book “Permanent Record” which amount to $5.2 million.

Vindication for Snowden’s revelations came, however, at the beginning of September when the US Court of Appeal ruled that the secret collection of phone records of millions of Americans violated the Foreign Intelligence Surveillance Act and may have been unconstitutional.

Translation by Jeannette Arduino,  from the voluntary Pressenza translation team.