Escalating the Demographic War: The Strategic Goal of Israeli Racism in Palestine 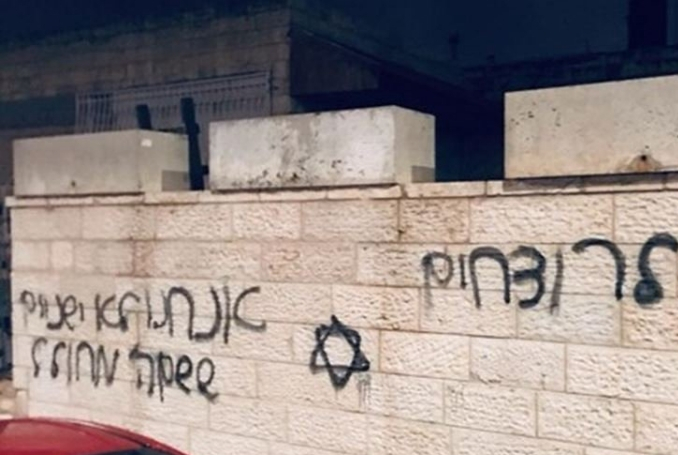 Racist graffiti on the walls of a Palestinian property in the West Bank.
(Photo: via Social Media)

4 Nov 2020 – The discussion on institutional Israeli racism against its own Palestinian Arab population has all but ceased following the final approval of the discriminatory Nation-State Law in July 2018. Indeed, the latest addition to Israel’s Basic Law is a mere start of a new government-espoused agenda that is designed to further marginalize over a fifth of Israel’s population.

On Wednesday, October 28, eighteen members of the Israeli Parliament (Knesset) conjured up yet another ploy to target Israeli Arab citizens. They proposed a bill that would revoke Israeli citizenship for any Palestinian Arab prisoner in Israel who, directly or indirectly, receives any financial aid from the Palestinian Authority (PA).

Worthy of mention is that these MKs not only represent right-wing, ultra-right and religious parties, but also the Blue and White (Kahol Lavan) ‘centrist’ party. Namely, the proposed bill already has the support of Israel’s parliamentary majority.

But is this really about financial aid for prisoners? Particularly since the PA is nearly bankrupt, and its financial contributions to the families of Palestinian prisoners, even within the Occupied Territories – West Bank, East Jerusalem and Gaza – is symbolic?

Here is an alternative context. On Thursday, October 29, the Israeli newspaper, Haaretz, revealed that the Israeli government of right-wing Prime Minister, Benjamin Netanyahu, plans to expand the jurisdiction of the Jewish town of Harish in northern Israel by 50 percent. The aim is to prevent Palestinians from becoming the majority in that area.

The contingency plan was formulated by Israel’s Housing Ministry as a swift response to an internal document, which projects that, by the year 2050, Palestinian Arabs will constitute 51 percent of that region’s population of 700,000 residents.

These are just two examples of recent actions taken within two days, damning evidence that, indeed, the Nation-State law was the mere preface of a long period of institutional racism, which ultimately aims at winning a one-sided demographic war that was launched by Israel against the Palestinian people many years ago.

Since outright ethnic cleansing – which Israel practiced during and after the wars of 1948 and 1967 – is not an option, at least not for now, Israel is finding other ways to ensure a Jewish majority in Israel itself, in Jerusalem, in Area C within the occupied West Bank and, by extension, everywhere else in Palestine.

Israeli dissident historian, Professor Ilan Pappe, refers to this as ‘incremental genocide’. This slow-paced ethnic cleansing includes the expansion of the illegal Jewish settlements in occupied East Jerusalem and the West Bank, and the proposed annexation of nearly a third of the Occupied Territories.

The besieged Gaza Strip is a different story. Winning a demographic war in a densely populated but small region of two million inhabitants living within 365 sq. km, was never feasible. The so-called ‘redeployment’ out of Gaza by late Israeli Prime Minister, Ariel Sharon, in 2005 was a strategic decision, which aimed at cutting Israel’s losses in Gaza in favor of expediting the colonization process in the West Bank and the Naqab Desert. Indeed, most of Gaza’s illegal Jewish settlers were eventually relocated to these demographically-contested regions.

But how is Israel to deal with its own Palestinian Arab population, which now constitutes a sizeable demographic minority and an influential, often united, political bloc?

In the Israeli general elections of March 2020, united Arab Palestinian political parties contesting under the umbrella group, The Joint List, achieved their greatest electoral success yet, as they emerged as Israel’s third-largest political party. This success rang alarm bells among Israel’s Jewish ruling elites, leading to the formation of Israel’s current ‘unity government’. Israel’s two major political parties, Likud and Kahol Lavan, made it clear that no Arab parties would be included in any government coalition.

A strong Arab political constituency represents a nightmare scenario for Israel’s government planners, who are obsessed with demographics and the marginalization of Palestinian Arabs in every possible arena. Hence, the very representatives of the Palestinian Arab community in Israel become a target for political repression.

In a report published in September 2019, the rights group, Amnesty International, revealed that “Palestinian members of the Knesset in Israel are increasingly facing discriminatory attacks.”

“Despite being democratically elected like their Jewish Israeli counterparts, Palestinian MKs are the target of deep-rooted discrimination and undue restrictions that hamstring their ability to speak out in defense of the rights of the Palestinian people,” Amnesty stated.

Since its establishment on the ruins of historic Palestine, and until 1979, Israel governed its Palestinian population through the Defense (Emergency) Regulations. The arbitrary legal system imposed numerous restrictions on those Palestinians who were allowed to remain in Israel following the 1948 Nakba, or ethnic cleansing of Palestine.

In practice, however, the emergency rule was lifted in name only. It was merely redefined, and replaced – according to the Israel-based Adalah rights group – by over 65 laws that directly target the Palestinian Arab minority of Israel. The Nation-State Law, which denies Israel’s Arab minority their legal status, therefore, protection under international law, further accentuates Israel’s relentless war on its Arab minority.

Moreover, “the definition of Israel as ‘the Jewish State’ or ‘the State of the Jewish People’ makes inequality a practical, political and ideological reality for Palestinian citizens of Israel,” according to Adalah.

Israeli racism is not random and cannot be simply classified as yet another human rights violation. It is the core of a sophisticated plan that aims at the political marginalization and economic strangulation of Israel’s Palestinian Arab minority within a constitutional, thus ‘legal’, framework.

Without fully appreciating the end goal of this Israeli strategy, Palestinians and their allies will not have the chance to properly combat it, as they certainly should.