Further Analysis of US Elections

9 Nov 2020 – In order to understand the deep meaning of the US election results, and to compare them to the electoral situation in France, I have downloaded a series of maps from the Internet showing the relation between voting patterns, poverty and urbanization.

Here are the maps for the United States, beginning with the electoral map showing states that voted for Trump in red. (click on maps to enlarge) 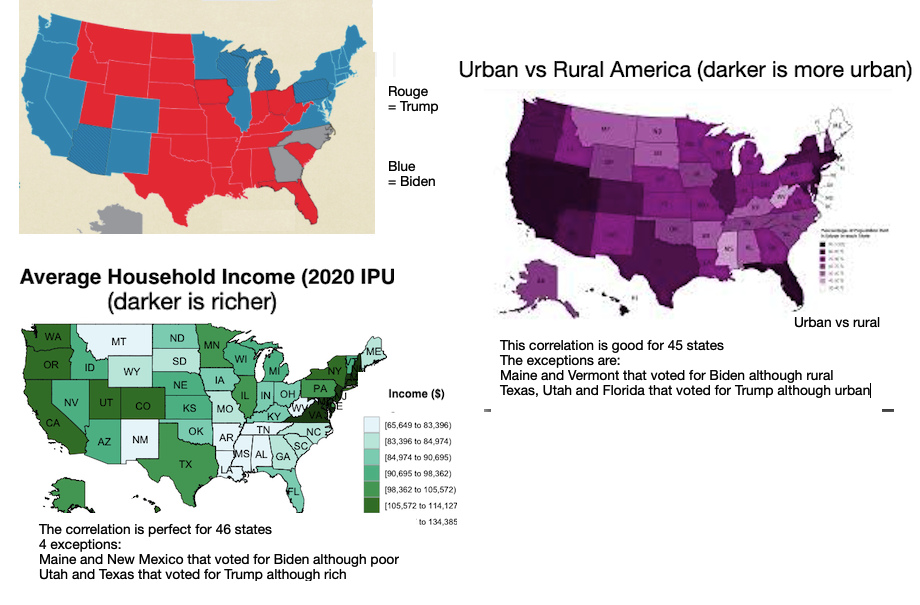 As you see, with only 4 or 5 exceptions among the 50 states, Trump won in the states that were poorer and more rural.

Having recently compared the appeal of Trump to that of Le Pen in France, I decided to make a similar set of maps for France. Here they are. (Again, click on maps to enlarge) 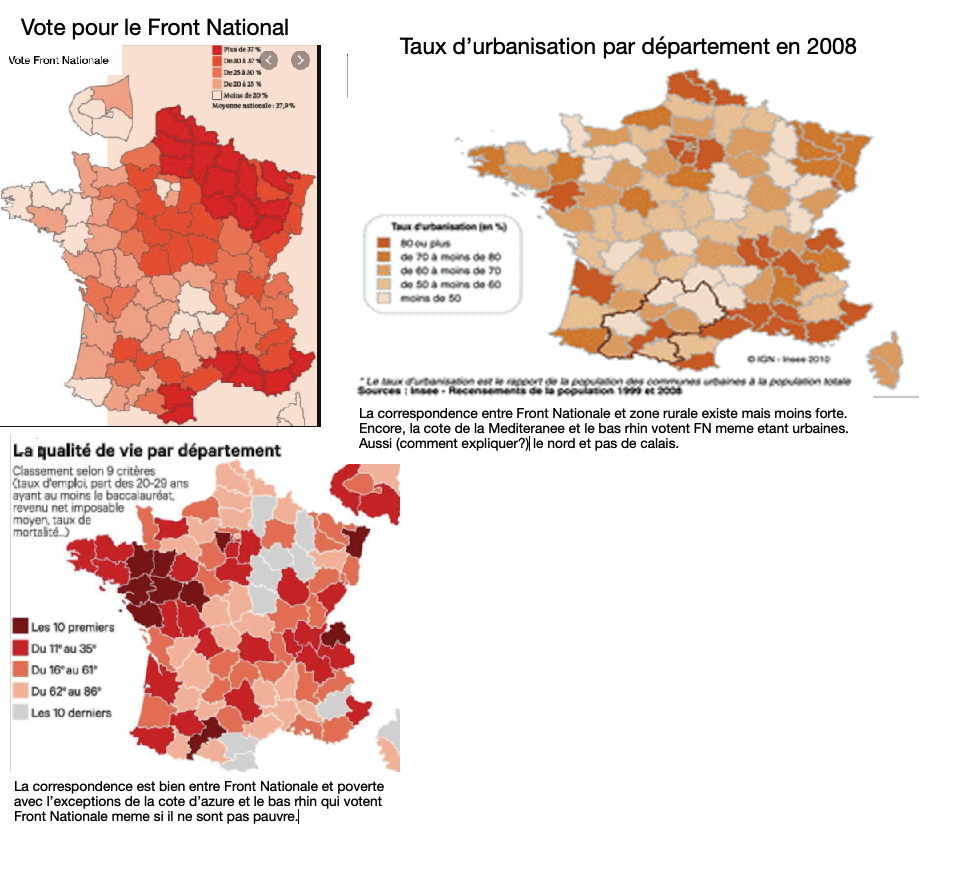 In the case of France, there is a relationship between the vote for Le Pen and the poverty and rural nature of the department concerned, but the relationship is overridden in the rich departments along the Mediterranean and in the traditional catholic conservative departments of Alsace Lorraine.

Of course, there are poor people in cities as well as in the countryside. However, the poor in cities are mostly Afro-Americans in the USA and the descendants of immigrants in the suburbs of French cities. Since Trump and Le Pen are racist and anti-immigrant, they do not join in the vote for them.

Without going into an analysis of the exceptions mentioned above, let us consider the meaning of the relationship between the electoral appeal of Trump and Le Pen and the poor, rural voter. As described in the earlier blog this month, their electoral appeal comes from the anger and alienation of voters who feel that their interests are not served by the national government and who believe that Trump and Le Pen are “on their side.”

Of course, the poor in cities are angry and alienated as well, which can be expressed in other ways.

In one sense, the supporters of Trump and Le Pen are correct. The modern capitalist state continues to serve the interests of the rich, and if there is one fact clear for more than a century now, the rich continue to get richer and the poor to get poorer. As Oxfam calculated earlier this year, “The world’s 2,153 billionaires have more wealth than the 4.6 billion people who make up 60 percent of the planet’s population.”

On this basis we can make a prediction. Even if Trump and Le Pen leave the scene, the cause of their appeal will continue to gather force. Presidents like Biden and Macron are not going to change the fundamental dynamic. The rural poor will continue to get poorer and they will vote more and more for candidates that claim to oppose the system. Of course, candidates like Trump and Le Pen have no intention to do so, but they claim they will change the system in favor of rural areas and the poor. Angry and alienated, the rural poor want to believe their rhetoric.

It is not just the days of the American empire that are numbered, as we have often stressed, but to quote Marx, by continuing to enrich the rich and impoverish the poor, capitalism continues to make the noose that will eventually hang it.

But here is the danger. 90 years ago when the economic systems collapsed in the Great Depression, powerful countries abandoned democracy and fell back on the extreme system of the culture of war – fascism. Make no mistake about it, fascism is based on force and violence first inside the country, and then preparing for external war. Indeed fascism is the culture of war in its purest manifestation. In order to avoid a repeat of the history of the 1930’s, it becomes more and more urgent to move forward on the transition from the culture of war to the culture of peace.

How to make such a transition? This blog has made proposals, such as a mayor’s security council, for several years now. The proposals have not yet obtained support, but perhaps the time is coming when we will have no choice but to move them forward.