6 Nov 2020 – Previously redacted portions of the Mueller report into supposed Russian interference in the US, released this week, have shown that despite every effort, the Justice Department was unable to concoct evidence of any criminal wrongdoing on the part of WikiLeaks or Julian Assange in relation to their 2016 publications exposing the Democratic National Committee and Hillary Clinton.

The revelation is the latest proof of the fraudulent character of the entire “Russiagate” narrative, used not only to smear Assange, but also to justify expanded online censorship and to push for greater US military aggression. It is evidence that the US state had been attempting to manufacture criminal charges against Assange, before an indictment was finalised in late 2017 over WikiLeaks’ completely unrelated 2010 and 2011 publications. 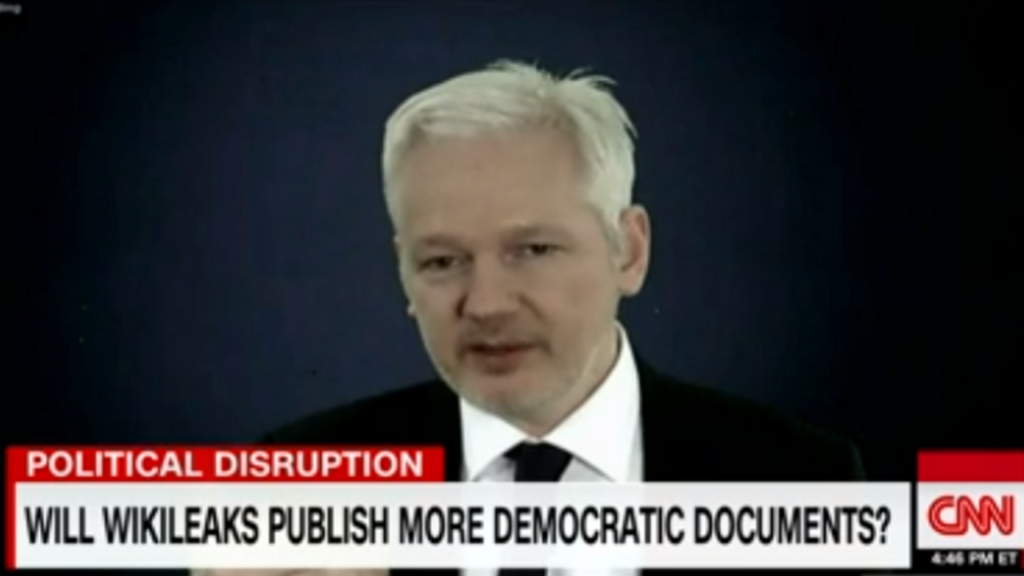 Assange interviewed by CNN in August, 2016. The network had a strap beneath him reading “Political disruption” throughout most of the interview.
(Credit: Screenshot CNN online broadcast)

The 13 new pages of the 448-page Mueller report were released on Monday as the result of a successful Freedom of Information Act lawsuit brought by the Electronic Privacy Information Center and Buzzfeed News.

The Justice Department has sought to block the full release of the report since it was brought down in March, 2019, including through the use of extensive redactions. In September, a US judge ruled that the government had violated the law by withholding sections of the report without legitimate cause, labelling some of the redactions as “self-serving.”

The contents of the new material shows why the Justice Department was so intent on keeping it hidden. The documents disclose that despite a two-year investigation, Special Counsel Robert Mueller came up with nothing to prove the collusion between WikiLeaks, the Trump campaign and Russian intelligence that had been trumpeted by the intelligence agencies, the Democratic Party and the corporate media.

This is in line with the character of the report as a whole, which was unable to substantiate any of the “Russian interference” in the 2016 US election that the Mueller investigation had been tasked with identifying.

The new pages reveal that one of the focuses of the Mueller investigation was laying the groundwork for criminal charges against Assange and WikiLeaks under the Computer Fraud and Abuse Act.

This was premised on the assertion that the internal Democratic National Committee (DNC) communications and emails of Clinton’s campaign chair, John Podesta, were hacked by the GRU Russian military intelligence agency before being published by WikiLeaks.

In May, it was revealed that CrowdStrike, a cyber security company handpicked by the Democratic Party to examine the DNC servers had been unable to find evidence that documents had ever been exfiltrated from them. In other words, there may not have been any successful hack, Russian or otherwise.

This aligned with Assange’s repeated insistence that Russia was not the source of the material. It lent weight to the claims of WikiLeaks collaborator and former British diplomat, Craig Murray, who has stated that he has personal knowledge of the source of the DNC documents, and that they were provided by “disgruntled insiders.”

Significantly, even though it is based on the discredited Russiagate framework, the newly-released material from the report concluded that there was no basis for laying conspiracy charges against Assange.

“The most fundamental hurdles” to such a prosecution, it stated, “are factual ones.” There was not “admissible evidence” to establish a conspiracy involving Russian intelligence, WikiLeaks and Trump campaign insider Roger Stone.

To justify the fact that all of the resources of the American state were insufficient to manufacture evidence of the theory that it had promoted for years, the Mueller report pathetically claimed that one of the problems was that WikiLeaks’ communications with the GRU were encrypted.

“The lack of visibility into the contents of these communications would hinder the Office’s ability to prove that WikiLeaks was aware of and intended to join the criminal venture comprised of the GRU hackers,” the report stated.

This is truly clutching at straws and desperately attempting to save face. Mueller was left to claim that the only possible evidence of a conspiracy was contained in encrypted messages that he and the intelligence agencies had presumably never seen!

The report concluded that an attempted prosecution would fail. “[S]uccess would also depend upon evidence of WikiLeaks’s and Stone’s knowledge of ongoing or contemplated future computer intrusions—the proof that is currently lacking,” it stated.

The centrality of Stone to the attempts to concoct charges against Assange underscores the frame-up character of the entire operation. After the Mueller report was finalised, Stone was successfully prosecuted. But it was not for involvement in any conspiracy. Rather, Stone was sent to prison for falsely claiming under oath that he had ever had any relationship with WikiLeaks or Assange.

The new documents show that Mueller was intent on establishing the grounds for a prosecution of Assange, with the precise allegations and charges a secondary matter entirely subordinate to the overarching goal of imprisoning the WikiLeaks founder.

Thus the Mueller investigation extraordinarily canvassed the possibility of charging Assange with having made “illegal campaign contributions” to Trump. These contributions were not financial, but were the publication of the DNC and Podesta emails.

Mueller was well aware that this would be an attempt to criminalise the publication of true and newsworthy information, concluding that such a prosecution would come up against the First Amendment of the American Constitution, which protects freedom of speech and freedom of the press.

Significantly, the Mueller report also warned that a conspiracy prosecution, even if evidence could be concocted, would confront similar obstacles. Precedent, it noted, had established that “the First Amendment protects a party’s publication of illegally intercepted communications on a matter of public concern, even when the publishing parties knew or had reason to know of the intercepts’ unlawful origin.”

The Russiagate narrative had already been entirely discredited before the release of new information from the Mueller report.

But the material further highlights the flagrant illegality of the US attempt to extradite Assange from Britain, and prosecute him on conspiracy and Espionage Act charges over WikiLeaks 2010–11 publications of the Iraq and Afghan war logs, US diplomatic cables and files from Guantánamo Bay.

All of the First Amendment issues relating to the 2016 publications apply with equal force to the 2010–11 releases. They were obtained by the courageous whistleblower Chelsea Manning, who had lawful access to them as an army intelligence analyst. The documents were published by Assange, who acted as an editor and a journalist exposing evidence of war crimes, human rights abuses and diplomatic intrigues.

That Mueller was seeking to lay the grounds for a criminal prosecution against Assange, on matters completely unrelated to those he has since been charged with, demonstrates the vindictive and political nature of the US Justice Department’s campaign against the WikiLeaks founder.

It paints a picture of a US state apparatus, intent on silencing Assange because he exposed their crimes, searching for years to find some basis for bringing legal action against him. Virtually all of the evidence relating to the 2010–11 publications has been known for a decade. The Mueller report suggests, however, the US state may first have been seeking to charge Assange over the 2016 releases. Only as it became clear that this would fail was a December, 2017 indictment filed in relation to the 2010–11 material.

That indictment, which has since been repeatedly superseded, was based on the Computer Fraud and Abuse Act, the exact same legislation Mueller unsuccessfully investigated prosecuting Assange under.

The clearly political character of the entire process means that Assange’s extradition to the US would be unlawful. Existing treaty arrangements between Britain and the US explicitly ban extraditions for offences of a political nature.

The latest Mueller material has been overshadowed by the 2020 US election crisis. It has been ignored by almost all of the publications that promoted the fraudulent Russiagate campaign, including the New York Times and the Washington Post.

The timing, however, is somewhat fitting. For the past four years, the Democrats, in line with their character as a party of Wall Street and the intelligence agencies, have sought to divert all opposition to the Trump administration into right-wing channels, including feverish claims that the president is an agent of Russia.

The current election crisis has underscored the utter bankruptcy of that strategy.