Trump’s ‘peace deals’ and ‘normalization’ efforts are hurting not only Palestinians, but all who hope for a moral international order. 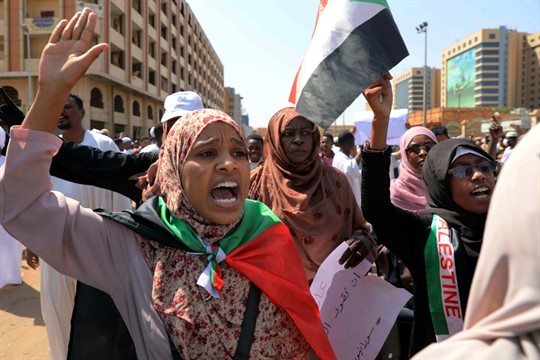 31 Oct 2020 – The announcement by US President Donald Trump of an apparent thaw in relations – “normalisation” in the current parlance – between Israel and another country, this time Sudan, has been hailed by some as highly significant and proof of the American president’s deal-making prowess. Significant, because Khartoum was the site of the 1967 Arab League summit which adopted “The Three No’s” – no peace with Israel, no recognition of Israel, no negotiations with Israel. Trump is declaring this as a victory for peace yet what it really represents is a victory for US-style authoritarianism and white supremacy.

Despite the pretensions, this is neither a peace agreement, nor ground-breaking. Sudan’s transitional government has been arm-twisted by the US into abandoning its moral principles for the sake of national survival. In exchange for paying more than $330m to US victims of terrorism and recognising Israel, Sudan will be taken off the US list of state sponsors of terrorism and relieved of the punishing sanctions that go with it.

This is what “deal-making” has been reduced to – the US using its economic might to bully countries into ignoring the continuing illegal Israeli occupation, theft and ethnic cleansing of Palestinian land. This is not about peace. It is about Trump doing everything he can to secure his re-election. It is also about legitimising oppression and apartheid, and the “might is right” conduct of international politics.

And it is not just Arab countries that are finding themselves on the US target list. It has recently been revealed that Washington is trying to make opposition to the Boycott, Divestment, Sanctions (BDS) movement in solidarity with Palestine a condition of a free-trade deal it is negotiating with Kenya. It is pressuring Nairobi to “discourage politically motivated actions to boycott, divest from and sanction Israel” and promise the “elimination of politically motivated, non-tariff barriers on Israeli goods, services, or other commerce imposed on Israel; and the elimination of state-sponsored, unsanctioned foreign boycotts of Israel, or compliance with the Arab League boycott of Israel”.

As the top recipient of US aid in sub-Saharan Africa which also receives significant development aid and security assistance from Israel, Kenya is particularly vulnerable to such pressures.

It also has a history of cooperating with apartheid regimes. While Kenya was vocal in supporting African resolutions which prohibited any kind of interaction with apartheid South Africa, in reality its position was at best flexible and at worst, hypocritical.

The need to keep within the good graces of its American and British benefactors, who were backing the apartheid state, as well as the fact that South Africa ate up a good chunk of Kenyan exports, limited any enthusiasm for tough action to back up the rhetoric. Kenya’s 1960 trade boycott against the apartheid regime, for example, was so ineffective that the value of imported South African goods went up during the nine months of the boycott.

Nairobi has already shown its hand. In 2017, it abstained from a United Nations General Assembly resolution to condemn Trump’s decision to move the US embassy in Israel from Tel Aviv to Jerusalem. As a result, it was rewarded with an invitation to a US “friendship” party and earlier this year, a White House visit for President Uhuru Kenyatta.

In 2016, Kenya was on the itinerary when Benjamin Netanyahu became the first Israeli prime minister to travel to the continent in decades. A few months later, he was back in Nairobi to attend Kenyatta’s controversial inauguration (which he was eventually forced to skip for security reasons) and to meet the heads of other African countries. On his part, Kenyatta was in Jerusalem in 2016 and his administration has promised to push to restore Israel’s long-coveted and long-denied observer status at the African Union.

In all of this, the real losers are not only the Palestinians, whose fight against oppression continues to be undermined, but all who hope for a moral international order.

For Africans, who have long recognised in the Israeli occupation the same colonialism and apartheid they have themselves experienced, Sudan’s capitulation and Kenya’s double-dealing are a reminder that the international stage is still a space where the equality and dignity of human beings can be bargained away.

Patrick Gathara is a communications consultant, writer, and award-winning political cartoonist based in Nairobi.