Rep. Gabbard, representative for Hawaii’s 2nd congressional and former presidential candidate, called on the president to reconsider the cases of the two men, both of whom have been charged under the Espionage Act.

Despite misleading prosecutors about his contacts with Russia, Flynn, 61, later retracted his guilty plea, claiming that he was set up by the federal agency.

The pardon did not go unnoticed by Rep Gabbard, who has previously called for the charges against Snowden and Assange to be dropped.

“Since you’re giving pardons to people,” she tweeted on Thursday, “Please consider pardoning those who, at great personal sacrifice, exposed the deception and criminality of those in the deep state”.

Rep. Gabbard has previously campaigned for the release of Snowden and Assange. Last month, she put forward a bipartisan bill seeking to make changes to the Espionage Act, which was ushered in shortly after World War I.

“Brave whistleblowers exposing lies and illegal actions in our government must be protected,” she said in a video to promote the legislation.

It remains to be seen whether Mr Trump will pardon either man.

He fled the US for Russia in 2013 after leaking secret information about domestic and national surveillance programs carried out by the NSA.

Snowden, 37, earlier this month announced that he plans to apply for Russian citizenship while signalling his intention to hang onto his US nationality.

During his re-election campaign, the president said he would “take a look” at pardoning Snowden. Any such move is unlikely to go down well with defense and security hawks, who view people like Snowden as traitors rather than truth-seekers.

Meanwhile, Assange is charged with 17 violations of the Espionage Act, one of the most serious crimes in US law with penalties of up to 175 years in prison.

He has been accused of conspiring to commit computer intrusion in order to assist Chelsea Manning with the intention of getting access to classified military information and publishing it on his Wikileaks website.

A warrant for Assange’s arrest was issued by the Swedish Prosecutor’s office in 2010 accusing him of rape and molestation.

Assange, 49, fled to London where he was holed up in the Ecuadorian Embassy before his arrest in May 2019. After his arrest, he was sentenced to 50 weeks in prison and is being held at Belmarsh’s high security prison in London.

“Associates” of the president are alleged to have offered Assange a pardon in return for the source of damaging emails about Hillary Clinton leaked on his website in the 2016 election campaign, claims denied by the White House.

Assange’s girlfriend and lawyer, Stella Morris, called on the president to pardon him so he could come home in time for Christmas to see his children.

“These are Julian’s sons Max and Gabriel. They need their father. Our family needs to be whole again,” she wrote in a tweet on Thursday.

“I beg you, please bring him home for Christmas.” 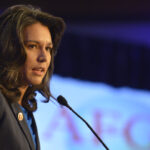 Representing Hawaii’s 2nd Congressional District, Tulsi Gabbard is a combat veteran, first Hindu and first female of Samoan ancestry to ever serve as a member of the U.S. Congress. She was born in Leloaloa, American Samoa in 1981, the fourth of five children.