Despite criticism from rights groups, families of young rape victims in Kaduna state say they support the new law. 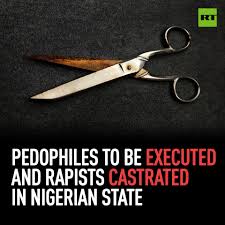 16 Dec 2020 – Content warning: This story contains graphic details of abuse that some readers may find disturbing. Names marked with asterisks have been changed to protect the identity of the child victims.

One Friday in September Adara* finally went to the police station in Kaduna State, northern Nigeria, to report the rape of her 12-year-old son.

The boy had been suffering from repeated night terrors, she told officers. Upon examining him some months back, it had taken her a moment to digest what she had seen. He had a festering wound and his underwear was stained with semen, she told Al Jazeera.

Her son told her that a tailor in the neighbourhood and his friends had been abusing him in their shop since a partial coronavirus lockdown began in March. She knew the abusers. They were men in their early 20s who lived in the same community. The 12-year-old said he had been scared to tell anybody. The men gave him sweets and money and warned that if he said anything, they would kill his entire family, he said.

Adara knew a spiral of stigma and gossip would accompany her speaking out about such issues in the conservative community. Nevertheless, she decided to report the rape. But her battle had only just begun.

Hours after she left the police station, her neighbours had already heard about her visit through the community grapevine. By the time officers arrived with an arrest warrant, the five suspects had fled and gone into hiding.

A spokesperson for the Nigeria Security and Civil Defence Corps (NSCDC) at Kaduna State Command, which looks into child abuse cases, said the investigation was ongoing, with a manhunt on to find and arrest the alleged suspects.

Adara said the suspects’ relatives, who all live in the same area as her, told her the reputation of the community would be ruined by her report and urged her to drop the case. Meanwhile, her neighbours spread tales about her son, saying that he was “passed around”.

“The stigma is disgusting,” Adara says, speaking in her native language, Hausa. When her son goes outside to play, “neighbourhood kids tease him that he was pimped out”.

Adara faced a backlash from her family as well and has been ostracised since going to the police. “My husband’s family advised him to leave me, and now he has left. I am the only one looking after the kids,” says the mother of four.

“I know people in the community, that their children were raped and they did nothing. They said: ‘Oh, it’s a community thing’, but because I am standing up they are now standing against me,” she says.

TO READ THE FULL ARTICLE Go to Original – aljazeera.com