Does Science Come from Spirituality or Is It Made by Man?

Science, as a body of knowledge, is clearly a human product. If we consider scientific books, they are written by human beings. Scientific concepts (such as gravity), their explanation and their mathematical postulation have also come from human beings.

However, it is also true that science studies certain things and spirituality studies certain other things. They both have their own focus. Spirituality is the study of consciousness and its source. Unless there were consciousness, there would not be the longing for understanding and we would not search for anything. The animals have existed for millennia, but animals did not develop science, and neither did they question as to why things exist or how things work. Why? Because we humans have a longing to understand and that longing essentially is for spirituality. That longing comes because the soul in a human body has developed consciousness by which he can think about such topics whereas animals simply think about their immediate need. For example, instead of Newton, if the apple had fallen on the head of a monkey, it would have simply picked it up and ran away. But when the apple fell on Newton, he asked the question, why does the apple fall? Although human beings too have a biological drive (just like the monkey), we also have a spiritual drive. Spiritual drive is basically the drive to make sense of things and to understand what-is-what? That desire to understand things, led to the theory of gravity, and further led to the development of science. 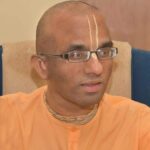 Chaitanya Charan is a monk and an author. He has a degree on electronics & telecommunications engineering and served as a software engineer in a prominent multinational. However, he felt inspired to dedicate his life to sharing the spiritual wisdom of the Bhagavad-gita under the aegis of ISKCON (International Society for Krishna Consciousness). He is a member of ISKCON’s leading intellectual body, the Shastric Advisory Council, and is the associate-editor of its global magazine, Back to Godhead. He travels the world giving talks on spiritual subjects in universities such as Princeton, Harvard, Stanford and Cambridge and companies such as Intel, Google, Amazon and Microsoft. See Chaitanya Charan’s talks across the world. His articles have been published in many national newspapers including Indian Express, Economic Times and Times of India. He is the author of twenty-five books on spirituality.
Go to Original – thespiritualscientist.com
Tags: Science, Science and Spirituality, Spiritual Science, Spirituality