EU Summit: Billions for the Banks, Nothing for Workers

12 Dec 2020 – The European Union (EU) summit on December 10–11 resembled a besieged fortress. It took place in the midst of the deepest social and economic crisis the EU has faced since its foundation.

The coronavirus pandemic is spinning out of control. Every day, more than 5,000 people die from the virus in Europe and more than 200,000 are newly infected—with the figures rising. Anger, indignation, and resistance are growing against the irresponsible policies of governments across the continent, which ignore all scientific warnings and sacrifice indispensable protective measures to the profit interests of big business.

The heads of state and government met in person in Brussels for the first time after the previous meetings of the European Council had been held online. They opted for this risky approach because the differences and tensions had reached a level that could no longer be overcome through video conferencing. 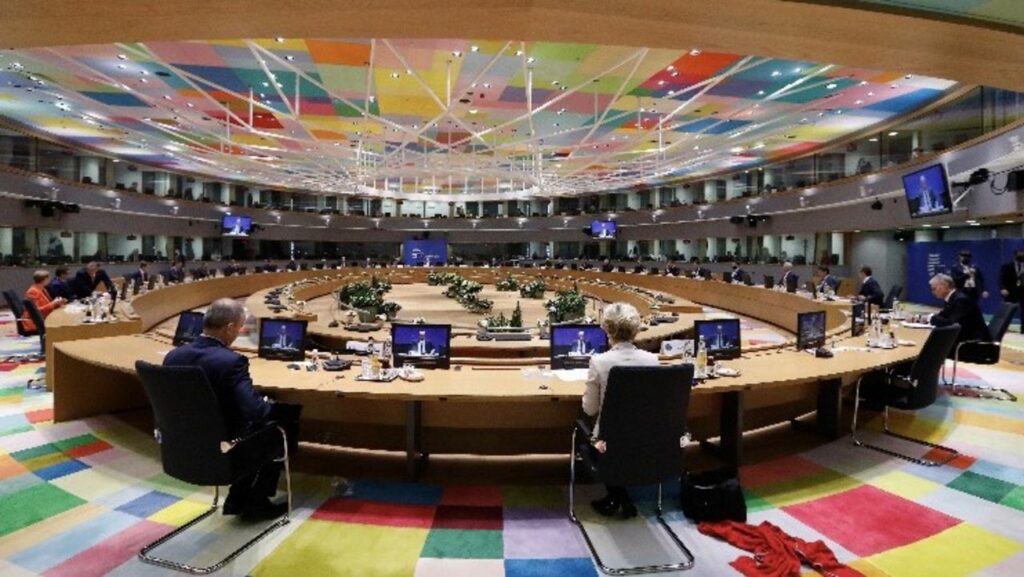 An image from the EU Summit (Twitter/@EUCouncil)

In hours of negotiations that lasted the entire night from Thursday to Friday, they finally succeeded in defusing the fierce conflicts. This does not mean, however, that the differences have been overcome. What currently holds the European Union together is, above all, the fear by the ruling class of the working class. When it comes to suppressing social opposition, building up a police state, pursuing a militaristic foreign policy and making new multibillion-euro gifts to the banks and corporations, they all agree.

It is significant that the European Council only discussed the pandemic peripherally and did not decide on any measures to contain it. Instead, the Council expressly welcomed “the coordination of efforts at EU level so far” and committed itself to “strengthening this coordination, in particular in preparing for a gradual lifting of restrictions and a return to normal travel, including cross-border tourism.”

This means that European governments will continue their current policies, which have led to the greatest health disaster since the Spanish flu a hundred years ago, and will do everything possible to quickly remove the completely inadequate protective measures.

The European Council’s most important decision was the adoption of the EU budget for the next seven years and the release of the €750 billion economic stimulus package, upon which the EU had already agreed in the summer. The EU Commission under Ursula von der Leyen thus has the gigantic sum of €1.8 trillion at its disposal in the coming years to enrich the banks and corporations, bribe politicians and bring recalcitrant governments into line.

European Central Bank (ECB) boss Christine Lagarde supplemented this sum on Thursday with a very special Christmas gift. The ECB extended its Pandemic Emergency Purchase Programme until the end of March 2022 and expanded it by €500 billion. The cost of the junk bonds the ECB will purchase from banks and speculators thus increases to an incredible €1.85 trillion.

This is the greatest redistribution of wealth in history, for the huge sums of money will ultimately have to be paid back by the working class in the form of cuts in social programmes and wages. The stock exchanges are jubilant. Despite the coronavirus crisis, European stock prices are approaching historic highs. Never has money-making been so completely disconnected from real economic development. If proof of the parasitic, antisocial character of the capitalist profit drive were needed, there could have been nothing more conclusive.

The EU budget and stimulus package were on the brink of collapse before the summit. Both Poland and Hungary had threatened vetos. In doing so, they wanted to bring down the so-called “rule of law” mechanism. In October, the European Parliament and the EU Commission had agreed on a regulation allowing the EU to suspend payments to member states that violate the rule of law principles of the EU Treaty. This was directed against Hungary and Poland, whose governments have largely undermined the independence of the judiciary and media.

German Chancellor Angela Merkel intervened personally before the summit to reach an agreement with Hungarian Prime Minister Viktor Orbán and his Polish counterpart Mateusz Morawiecki, which was then confirmed by the European Council. The rule of law mechanism remains in place and will be solemnly invoked again in the “conclusions” of the summit. However, it is now festooned with so many preconditions that it will never be applied in practice. Orbán and Morawiecki celebrated the agreement as a victory.

In any case, the EU was never concerned with democratic principles. The slide of Hungary and Poland into dictatorial forms of rule was, above all, an obstacle to the EU’s aggressive foreign policy, which it likes to cloak with phrases about “Western values” and “democracy.” Indeed, all European governments are increasingly open in their resort to dictatorial and fascist methods to suppress the growing resistance of the working class.

For example, 10 days before the summit, the French National Assembly passed a “global security law” against which hundreds of thousands took to the streets. Among other things, it prohibits the filming of violent police officers and severely restricts press freedom. An anti-Islam law, which the government of Emmanuel Macron is currently discussing, bears openly racist features and tramples on basic democratic rights. The final declaration of the European Council does not mention this law directly, but it does support its content.

The topic of “security” occupies twice as much space in the “conclusions” of the EU summit as COVID-19. The “recent terrorist attacks in Europe” serve as a pretext. While the European Council expressed not a word of regret for the 450,000 European victims of the coronavirus pandemic, it exudes hypocritical condolences for the victims of these reactionary attacks—and derives from them a comprehensive programme of mass surveillance, censorship and increased police powers.

It is “extremely important to prevent radicalisation and to take action against the ideologies underlying terrorism and violent extremism, including on the Internet,” the final declaration states.

The European Council calls for “stepping up the fight against illegal content online” and “ensuring that religious education and training are in line with European fundamental rights and values.” It was “essential that law enforcement and judicial authorities are able to exercise their lawful powers both online and offline to combat serious crime.” Police and judicial cooperation and coordination “should be strengthened”.

The EU summit took the longest time to define a common climate change target. It was finally agreed that greenhouse gas emissions should be reduced by at least 55 percent by 2030 compared to 1990 levels and that public and private capital should be mobilised to this end.

But how this goal is to be achieved was not specified, and there are considerable differences over this. Some eastern European countries and France, for example, want to push ahead with the expansion of nuclear energy, which others strictly reject. Moreover, this goal is to be achieved only in net terms; reforestation and other nature conservation measures can be offset against it.

On foreign policy, the summit reaffirmed the imperialist claims of the EU in the “Eastern Mediterranean” and the “southern neighbourhood”—i.e., in North and Central Africa. In the Eastern Mediterranean, the EU “remains committed to defending its interests and those of its Member States as well as to upholding regional stability,” the final declaration states.

Strong differences over Turkey were bypassed. On the one hand, the country was strongly condemned; on the other hand, the European Council reaffirmed “the EU’s strategic interest in the development of a cooperative and mutually beneficial relationship with Turkey.” Greece, Cyprus, and France were unable to assert themselves by demanding tough sanctions against Ankara.

Overall, the European summit was characterised by fierce national conflicts, which will continue to intensify. In the face of a deep economic crisis and growing social conflicts, Europe’s ruling classes are ruthlessly defending their own interests and fuelling nationalism.

This was most evident in the question that hovered over the entire summit but was not discussed there: Brexit.

The evening before the summit, British Prime Minister Boris Johnson had met with EU Commission President Ursula von der Leyen for dinner in Brussels, but no agreement was reached. The probability of a hard Brexit with corresponding shock waves on December 31 has thus increased considerably.

Johnson has long since become a prisoner of the right-wing Brexit supporters, whom he encouraged. The EU is not prepared to make concessions because it fears that other countries will then demand concessions, undermining Franco–German dominance and causing the EU to disintegrate for good. “Because one thing is clear: the integrity of the internal market must be preserved,” said Chancellor Merkel, explaining the EU’s tough stance.

The unity of Europe, which is indispensable to advance the continent economically and raise the general standard of living, is not possible on a capitalist basis. The EU does not embody the unity of Europe; it is an instrument of powerful capitalist interests to oppress the working class and pursue imperialist goals. It is throwing the continent back into the same national conflicts that sparked two world wars in the last century.

The only way forward is the unification of the working class in a common struggle for a socialist programme against the European Union and for the United Socialist States of Europe.