George Galloway: The Brexit Deal Is Done. We Are Now Free to Build a New Britain…If We Want It 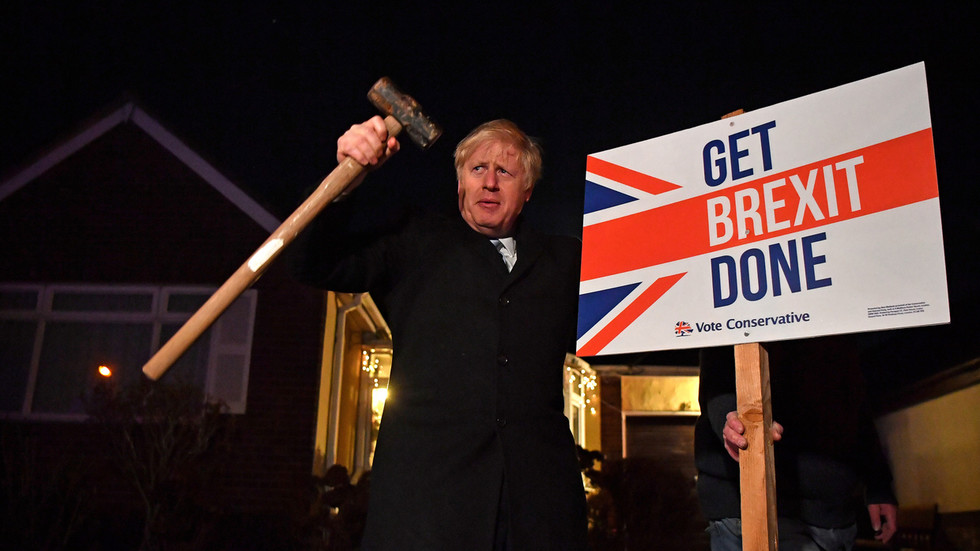 24 Dec 2020 – The freshly-signed Brexit deal between the UK and the EU was four years in the making – but has been needed for over four decades. Now that we are free, it’s on us to make all the waiting and all the concessions worth it.

It’s the end of a long song, a lament. In 1975 I was a runner for the late Mr. Tony Benn, bringing his tea and tobacco to the stage in the days one still could belch pipe-smoke into a large and enthusiastic audience. He was at one and the same time quintessentially British and a supreme internationalist. He was our original Brexiteer. By our I mean the left, when left actually meant left before the word cross-dressed with liberalism. On the same stage were men who made Nigel Farage look like a Fabian. Foremost amongst them Enoch Powell, the grand-old guru of empire-loyalists. Needs must. A binary question, yes/no, in/out, will always throw together unlikely allies. Something the “left” forgot when they saw me on stage with Nigel Farage in 2016.

Forty-five years later Britain stands on the doorstep of the world, free at last of the stultifying stuttering super-state of the EU.

Also: ‘We have taken back control of laws and our destiny’: Prime Minister Boris Johnson delights in Brexit deal

It is a necessary but not sufficient condition of the Britain we need to build. It is far from sufficient but it is wholly necessary. It’s true the world is very different from 1975. The socialist world to which someone like me wished to adhere 45 years ago is no more. The Commonwealth we wished to take with us has grown richer in many cases and potentially so in virtually all.

That which bonded us nearly severed by the way we turned our backs on it in preference of the European Economic Community.

But the case for Brexit proved victorious in any case as a country of over 60 million losers from the globalisation game (over 30 million of them eligible voters) were asked to give a thumbs up to the status quo which beggared them. Not bloody likely, they answered with their pencils. The 17.4 million Brexiteers and their children decided to take a punt. What did they have to lose after decades of deindustrialisation, depressed wages, austerity and neo-liberal orthodoxy?

Boris Johnson has ‘Got Brexit Done’. They say a prime minister is only ever remembered for one thing – ask Tony Blair – and however long Boris now remains (I hope it’s short) nobody can now erase this achievement.

They said he couldn’t get a withdrawal agreement through a log-jammed House of Commons – ask Theresa May if you can remember what she looked like – but he did.

They said he couldn’t get an election, or win it. He did both.

They said he couldn’t get a free-trade deal with an embittered EU desperate to show les autres not to mess with Brussels and try and follow Britain out.

He now has. Only a churl would refuse to acknowledge this remarkable run of victories for the Prime Minister Boris Johnson.

Personally I favoured no deal on the grounds that my reasons for leaving andmy path to the future are not the same as the new orthodox.

Boris’s deal leaves a good deal to be desired. The most important issue for me was the EU’s determination to secure a “level playing field” on the issues of competition, particularly on public ownership, state aid to industry, and state intervention in the market. A measure of our topsy-turvy times is that on these matters the liberals, the “left” AND the trade unions backed the EU demands and opposed the idea that any future UK government could intervene to save their members’ jobs. Turkeys voting for an early Christmas doesn’t come close.

The final outcome, to be fair, provides some wriggleroom for the likes of me but still any future attempt for strategic reasons to protect our steel industry,rebuild our shipbuilding capacity or prefer our own products in state purchasing decisions will likely end up in the courts. And not even British courts either.

Our fishing industry – decimated by 45 years of French super-trawling our waters with their factory ships – will have important respite, but not wholly and not yet.

The divorce bill of £40 billion will now as a result of the deal fall due when I can think of a hundred things I’d rather do with it than stuff it like foigras down the gizzards of the bloated Brussels plutocracy.

And yet we are now free – if we want it.

Free to decide who can live here and who must leave. Free to say FU to EU demands to sanction others. Free to make friends with the capriciously chosen enemies of both Washington and Brussels – usually the same in any case.

We are free to trade on any terms we like with the suns rising in the east. Free to refuse to go quietly into the sunset in the west.

We must up our game to be sure. A Britain enfeebled by decades of EU-sponsored decline, lacking in national-consciousness and self-confidence; a shrunken skills base, a low-wage low-motivated flabby labour market hooked on a cheap East European workforce, an economy built on the chimera of high house prices, debt and the Casino economy of the square mile will not cut it.

But a New Britain can be ours – if we want it. We can build a New Jerusalem in this green and pleasant land – if we want it. And I’m hearing whispers, leaks from the negotiations, that we may even have secured an opt-out from the agony of the Eurovision Song Contest! Singhallelujah!

One Response to “George Galloway: The Brexit Deal Is Done. We Are Now Free to Build a New Britain…If We Want It”