‘I Can’t Fall Asleep’: The Trauma of Israeli Raids on Palestinian Homes

A new report by human rights groups highlights the arbitrary nature and psychological harm of the Israeli army’s home invasions on Palestinian families. 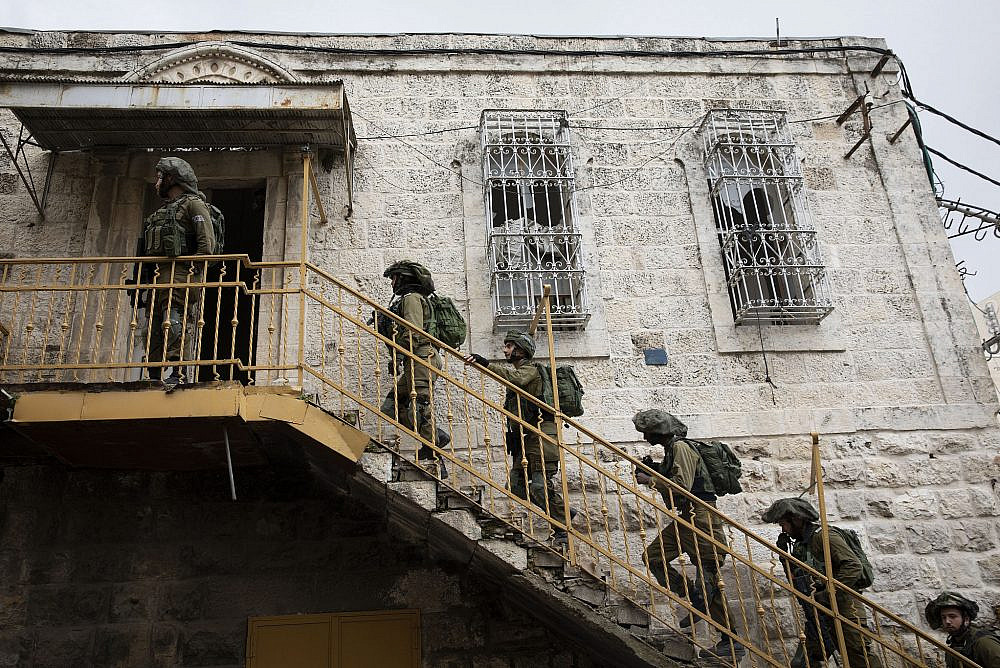 2 Dec 2020 – A decade or so ago, I joined Israeli activists at the Palestinian village of Asira al-Qibliya in the occupied West Bank, located near Yitzhar, an Israeli military outpost that was turned into a civilian settlement in the 1980s. We arrived a few hours after settlers had raided the village, attacked Palestinian residents, and vandalized their property. Fearing the settlers might come back, some residents asked us to stay overnight.

The settlers did not return, but at around 2 a.m., Israeli soldiers invaded the village, moving from one house to the next. We woke up to the sound of hard knocks on the metal door of the home we were staying in. The soldiers, who were surprised to find Israelis in a Palestinian village, gathered all of us — including children — in the garden, and conducted a quick “interrogation” with each person.

As opposed to a police interrogation, the soldiers did not inform us of our rights. While it was clear that they were unlikely to cause us harm, since we were Israeli citizens, I still remember trembling with fear as we stood outside in the cold, half asleep.

When the soldiers noticed I had a camera, they yelled, “No filming!” With my hands still shaking, though, I was still able to take a few shots.

The soldiers were “merciful” with the Palestinian family that was hosting us, but the house next door was completely upturned, and their belongings were emptied out. About an hour later, the soldiers went back into their military jeeps and disappeared into the night. They did not produce a search warrant or provide an explanation for the raid.

These military home invasions, which are embedded in the violence of Israel’s occupation, are the subject of a new report released on Tuesday by human rights organizations Yesh Din, Breaking the Silence, and Physicians for Human Rights-Israel. The report focuses on the mental health effects that such raids have on Palestinians, and how, aside from the army’s stated objectives, these invasions have themselves become a goal. There is no official procedure for home raids in the West Bank, which effectively means that, as far as Israel’s military is concerned, any Palestinian home at any given time is a legitimate target. 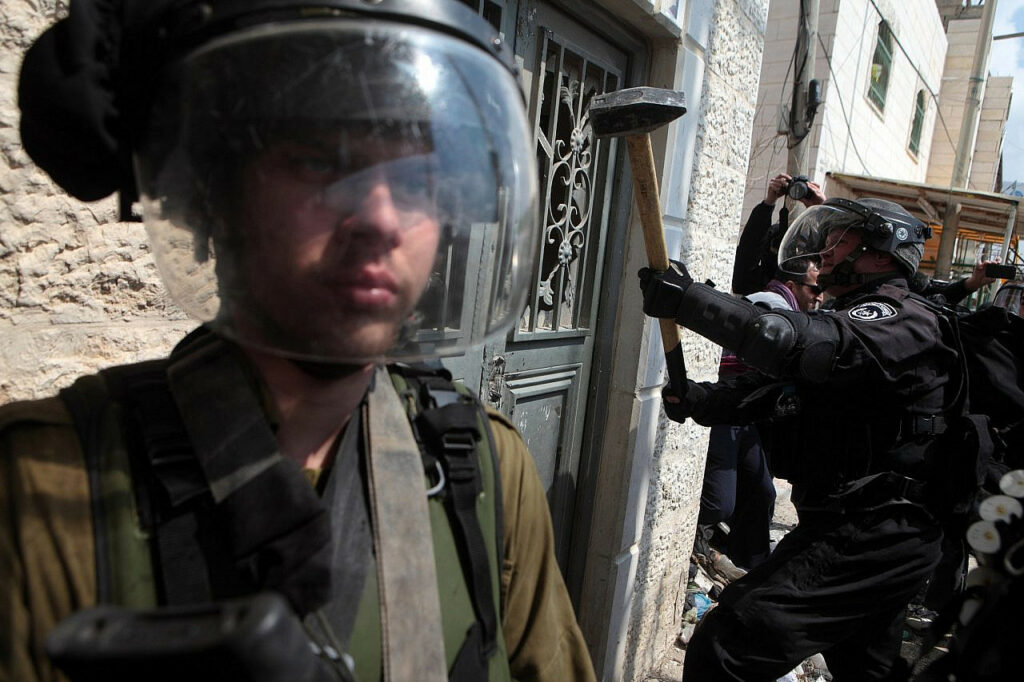 Israeli forces break into a Palestinian building during a Land Day demonstration at Qalandiya checkpoint between Jerusalem and the West Bank city of Ramallah on March 30, 2012. (Activestills.org)

The report, titled “A Life Exposed: Military invasions of Palestinian homes in the West Bank,” is based on 158 testimonies from Palestinians who have had their homes raided in recent years; 31 interviews conducted by health experts with affected Palestinian families; and interviews with 40 Israeli soldiers and five officers who took part in such invasions.

In 88 percent of incidents documented in the report, the Palestinian families testified that soldiers ordered them to gather in a single room, or separated them into different rooms, where they were kept under guard. In 30 percent of the invasions mentioned, Palestinians reported that soldiers threatened them with violence, and in 25 percent of the cases Palestinians said soldiers used force or physical violence against a family member. Of the families interviewed, 64 percent said their homes were raided more than once. Of the invasions recorded, 88 percent took place between midnight and 5 a.m. 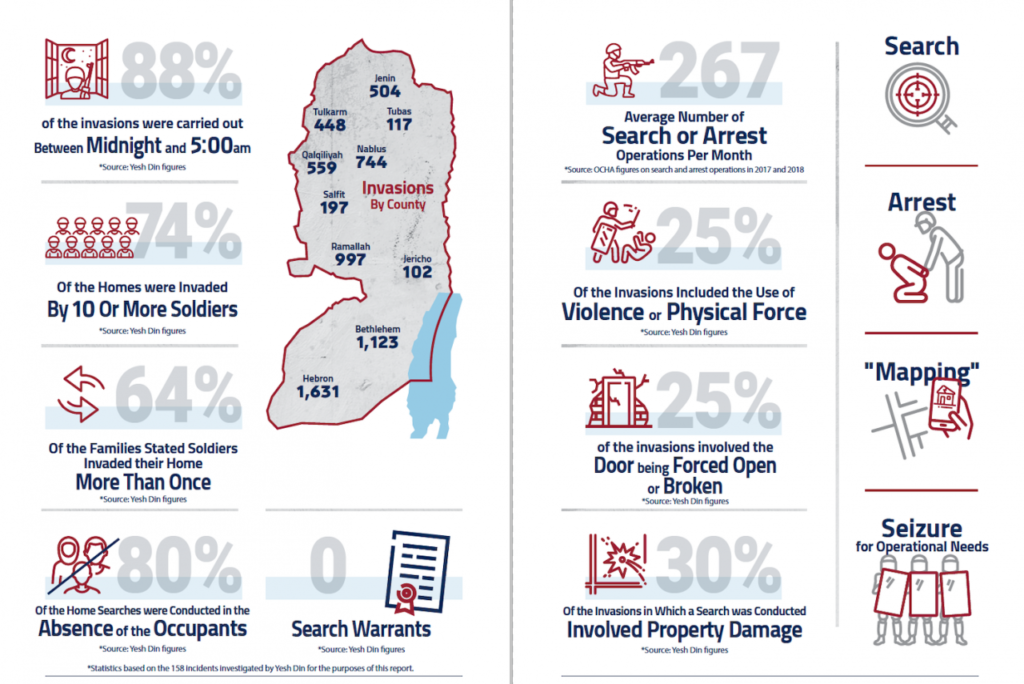 Statistics from a new report by Yesh Din, Breaking the Silence and Physicians for Human Rights Israel on military home invasions in the occupied West Bank, based on 158 investigated cases.

“Military invasions into Palestinian homes [in the West Bank] are of the most common and routine operations under Israeli occupation,” says Ziv Stahl, the director of Yesh Din’s research department, who also worked on the report. “Although Israelis are less familiar with this phenomenon than checkpoints or home demolitions, many Palestinians are born and raised in a reality in which armed soldiers routinely raid their homes,” she continued. “This is a violent and repressive tool that is central to Israel’s mechanism of control over Palestinians.”

Oren Ziv is a photojournalist, a founding member of the Activestills photography collective, and a staff writer for Local Call. Since 2003, he has been documenting a range of social and political issues in Israel and the occupied Palestinian territories with an emphasis on activist communities and their struggles. His reportage has focused on the popular protests against the wall and settlements, affordable housing and other socio-economic issues, anti-racism and discrimination struggles, and the struggle to free animals.