“L’effondrement”, the French Series That Stages the Collapse of Society 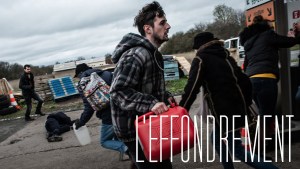 18 Dec 2020 – The Collapse is a French television series inspired by the theses of the new academic subject of Collapsology, the transdisciplinary study of the risks of collapse of the industrial civilization. The word Collapsology was coined by Pablo Servigne and Raphaël Stevens in their essay: How Everything Can Collapse (2015). But the scientific modelling of the anthropogenic destruction of the biosphere dates back to 1972 with The Limits to Growth of the Club of Rome.

The series was created, written and produced by the collective Les Parasites and broadcast by Canal+ in November and December 2019, just before the Coronavirus crisis started in Europe. It has been granted at least 6 awards, including the Berlin Special Projection and an Emmy for the best mini series. Lately Les Parasites have made short films such as Whistleblowers, Board Games or Crisis of Empathy, which question with irony and dark humour generalized surveillance, the excesses of capitalism and individualism.

This series follows the trajectories of individuals, groups and families at different times and in different places, as they seek by different means to survive in a world they no longer control, in a situation of collapse. Throughout the episodes, the viewer remains ignorant of the precise causes of the beginning of the societal collapse. They are shown stages and processes of responses and reactions on the part of the characters and their communities, always marked by triggering events, apparently harmless that we have all experienced before (power cuts, lack of supplies in the supermarket, fuel shortages, etc.) which lead to more serious events (theft, use of arms) liable to degenerate an already very tense situation. Some episodes show competition for survival, dealing with a survivalist aspect, while others present ways of organizing mutual aid.

Episode 1, The Supermarket, takes place on day D+2 and features Omar, a supermarket cashier, who is supposed to help his girlfriend Julia and friends to obtain supplies to run away from town. There are shortages of electricity and of essential commodities. The supermarket manager takes advantage to speculate by rationing some goods. GSM and credit card networks start failing. Omar is afraid to lose his job and declines to join the group, but helps them to escape without paying. Finally Omar tries to join the group but is caught by the security and police agents. The main themes of this episode are: the fragility of the industrial society; the blind faith in the consumerist society; the use of crises by the elites to speculate; the use of violence at the service of the ruling class;.

Episode 2, The Fuel Station, takes place on day D+5. There is a long queue at a gas station, which only accepts food as payment. A man tries to pay with his young daughters’ fruit, but it is rejected because it is perishable. The owners, Christophe and Marianne, and their handicapped son have prepared a van to escape before the situation degenerates. A Policeman threatens with his gun to get his tank filled, but the reserves run out and the crowd starts looting the station. The man with the daughters takes Christophe’s van threatening with the policeman’s gun and escapes the turmoil. The main themes of this episode are: the relative value of things in a collapse: food, guns and money; the law of the jungle and the breakdown of societal controls; the excessive dependence on fossil fuels.

Episode 3, the Aerodrome, takes place on day D+6. Laurent Desmarest sleeps in his luxury mansion with his lover and is waken up by a call from his insurer, who warns him that he has 15 minutes left to arrive to the nearby aerodrome to be extracted. He tries to get his wife Sofia, who is away, rescued as well, without success. He rushes with his driver to the aerodrome, taking some valuable paintings. Displaced people crowd the roads. On the way Laurent injects an ID chip in his arm.  He misses the flight, but is informed that he can still take a flight in 50 minutes in another aerodrome. He tries to bribe the owner of a private plane to fly him there, but ends up stealing the plane as he can pilot it himself. The main themes of this episode are: the extreme inequality of wealth, opportunities, information, skills, risks, security; the privatization of security; the (loss of) value of money;

Episode 4, the Village, takes place on day D+25. A city-dweller leads a group of IDPS that he has met on the road to an ecovillage. The ecovillage community meets to decide whether to admit them or not. Karine, one of the displaced, fears that they will be rejected and convinces two of his colleagues to run away with the community’s food and medicines. She kills the son of the community leader when they are discovered and then one of the displaced who witnesses her hiding the body. The group is finally allowed to stay, but Karine escapes. The themes in this episode are: the fight for survival; the advantages of rural areas during crises; the value of life; human security; individualism vs solidarity; trust.

Episode 5, the Nuclear Plant, takes place on day D+45. Amine is leading a group of volunteers to desperately try to cool down manually a nuclear reactor until the water supply is restored. The plant finally explodes and several of them are wounded. They start evacuating at a radius of 50 km, but a second explosion occurs. Themes: technological disaster; the end of the industrial civilization; leadership; sacrifice; altruism.

Episode 6, the Nursing Home, takes place on day D+50. Marco is the last employee remaining at a nursing home. He is very gentle with the elders, but medicines and food are running out. A former employee arrives to steal food and to convince Marco to leave to save his life. Finally Marco agrees to go, but before leaving he does the euthanasia of the residents with a gas bottle. Themes: intergenerational justice; compassion; euthanasia; old age.

Episode 7, The Island, takes place on day D+170. Sofia Desmarets (Laurent’s wife from episode 3) is in a tropical island and manages to escape from two men who try to steal her yacht. While sailing towards “the island” she tries to radio her position and identity without success. At sight of “the island” the boat hits a floating wall where other boats (with corpses inside) are held. A small drone fires and wounds her, but she manages to shoot it down with a signal pistol. She finally succeeds to show her insurance ID to a second incoming drone and later a fast boat arrives to rescue her. Themes: survival ghettoes for the rich; AI/robot weapons; walls.

Episode 8, The Emission, goes back to day D-5. Environmentalist Jacques Hombla breaks into a TV show which includes Environment Minister Sofia Desmarets, with whom he had worked before. He wants to warn the public of the looming environmental collapse that has already started in the global South. The Minister wants to reassure the public, but Jacques argues that green growth is an illusion to deceive the public on behalf of a greedy cast. Humanity should be ready to survive the collapse of civilization, which is now inevitable because nothing was done for the last 50 years. Measures should be taken to reduce famine, lack of water, millions of deaths and displacement. The presenter creates a pause to get rid of him and Sofia tries to recruit him. Themes: mercenarism of politicians, academia and the media; gullibility of the public; the entertainment society.

Entirely filmed in sequence, the series shines through its technique, which allows the viewer to be as close as possible to the protagonists to follow their adventures in real time. Some musical notes are heard but the format remains raw and abandons all the elements that usually decorate a film or a traditional series. The method is all the more interesting because it allows to observe the uninterrupted play of the actors, held to remain in their characters until the last moment.

The episodes have taken us through the gradual destruction of society by an unidentified catastrophe caused by industrial society. With some exceptions, the institutions like government, academia and the media are at the service of a greedy and corrosive elite. The gullible public and even part of the elite (like Sofia) believe the myths of neoliberalism, while other oligarchs are well aware of the risks and prepare for survival in remote locations with the help of private security companies like her own husband. This series consciously incites fear and anxiety to try to oblige the public to react to the looming societal collapse.

The COVID19 pandemic with the limited breakdown that it is causing is a good moment to watch this series, in order to incite to reflexion on greater dangers ahead. As Bardi (2019) says, “collapse is not a bug but a feature of complex systems” like our industrial society.

As this article is about a fictional story, and in order to deepen on the subject, I would like to recommend the following academic/ official/ advocacy bibliography related to Collapsology:

Bardi U. (2020), Before the Collapse. A Guide to the Other Side of Growth. Springer

Bardi Ugo (2017). The Seneca Effect: Why Growth is Slow But Collapse is Rapid. Springer.

Costanza R (2007), Sustainability or Collapse? An Integrated History and Future of People on Earth. MIT Press

Steffen W et al. (2018), “Trajectories of the Earth System in the Anthropocene”, PNAS.

Daniel Ruiz, PhD, is a researcher in Peace Studies at Scuola Superiore Sant’Anna di Pisa (DIRPOLIS). His main focus is on the nexus between political and environmental crises. He is a former Director at the United Nations and deployed, for more than 20 years, in conflict and disaster situations. E-mail: daniel.ruizlopez@santannapisa.it