Robodoc: How India’s Robots Are Taking on Covid Patient Care

The pandemic has spurred on robotics companies building machines to perform tasks in hospitals and other industries. 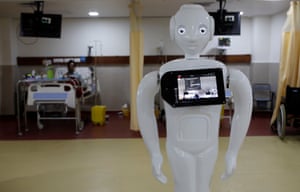 Robots such as Mitra are being used to reduce risk of infection for medical staff. : Photograph: Adnan Abidi/Reuters

2 Dec 2020 – Standing just 5ft tall, Mitra navigates around the hospital wards, guided by facial recognition technology and with a chest-mounted tablet that allows patients and their loved ones to see each other.

Developed in recent years by the Bengaluru startup Invento Robotics, Mitra costs around $13,600 (£10,000) and – due to the reduced risk of infection to doctors – has become hugely popular in Indian hospitals during the pandemic.

Since making headlines at its debut in 2017 at an international summit, where it greeted Ivanka Trump and interacted with India’s prime minister Narendra Modi, Mitra has increasingly been put to use in hospitals treating Covid-19 patients.

“Mitra was originally meant for care homes, but was adapted during the pandemic to assist doctors and nurses by taking vital readings, and to help in consultations,” says Balaji Viswanathan, chief executive of Invento Robotics, which now exports the robot to five countries including the US and Australia.

India still only has about three robots for every 10,000 workers, but the domestic industry is growing rapidly, fuelled in no small part by the pandemic.

Successful startups have boomed and according to the latest report by the International Federation of Robotics (IFR), India is now among the top 10 countries for annual installation of robots in industries. Industrial robot sales reached a new record of 4,771 in 2018, up 39% from the previous year.

According to the daily Business Standard, the robotics market in India is expected to grow by 20% between 2017 and 2025. From hospitality to hospitals, a range of sectors are adopting automation to reduce costs, time or to achieve precision and – in some cases – save lives.

One startup called Genrobotics, from the southern state of Kerala, collaborated with local authorities to adapt its spider-shaped robot Bandicoot to clean sewers and manholes, which until then had been cleaned manually – notoriously dangerous and unpleasant work.

“Though the machine is expensive, it can prevent human lives from being lost.” — Babu K Y, Hand to Hand India

“We found manual scavenging is a global issue, and there was no efficient tech to clean manholes,” says Rashid K, head of Genrobotics.

Babu K Y is the manager of Hand to Hand India, an NGO involved in bringing Bandicoot to Tamil Nadu. “Though the machine is expensive,” he says, “it can prevent human lives from being lost in this hazardous operation and is also very easy to operate, helping reach greater depths than in manual scavenging.”

Since 2011 the Indian army has been using Daksh robots equipped with x-ray vision and chemical, biological, radiological and nuclear hazard detection mechanisms. Delhi’s GreyOrange is now making robots for the growing warehousing and automation sector.

According to a report by the IFR in 2017, India’s automotive sector was the main customer for industrial robots, accounting for 62% of the total supplied. Maruti Suzuki India used robots in its Manesar and Gurgaon plants and Mahindra has a robotic welding line in its plant in Nashik. Tata Motors uses an industrial robot made in India to lift heavy loads.

Although many Indian hospitals adopted robots during the pandemic because of a shortage of PPE, and because they can be used for disinfecting floors using ultra-violet radiation and strong disinfectants, they were also being used before the pandemic in healthcare, for surgeries requiring high levels of precision.

“This system helps me in performing difficult surgeries with 10 times more magnification, and 3D views. ‘Firefly’ fluorescence technology used with the Da Vinci robot lights up the blood supply to the organ, and helps differentiate cancerous from healthy tissue,” he says. “Though these systems are very expensive and have to be imported, their superior advanced technologies are invaluable in complex surgeries.”

Rajeev Karwal of Milagrow Human Tech has seen his company expand swiftly. “We started off making robots for residences, from floor-cleaning to swimming-pool-cleaning robots, and later industrial robots for the hospitality industry.

“With the advent of the pandemic, we focused on humanoids that could be used to disinfect hospital floors, provide temperature checks, do ward rounds and arrange phone calls with doctors,” he says.

However, adoption of robots in India has been slow for many reasons, the main one being processes in Indian companies are not very standardised. Another is the high customs duties on importing the technology.

There are also widespread fears that robots will take away jobs in a country where unemployment is already high.

“Doctors and staff are reluctant to use technology and monitor the robots, and there is also the problem of poor wifi.”

“Even though humanoids were introduced in Indian hospitals during the pandemic, doctors and staff are reluctant to use technology and monitor the robots, and there is also the problem of poor wifi connectivity in many places, that may make people go back to their old ways of doing things,” says Karwal. “For new technology mental and physical barriers need to be crossed.”

Scaling up remains a challenge, but the automation trend looks as though it’s here to stay.

As Karwal says: “Once you adopt these technologies, there’s no going back. Leveraged intelligently, they put you on the path to better solutions that make life easier for people.”