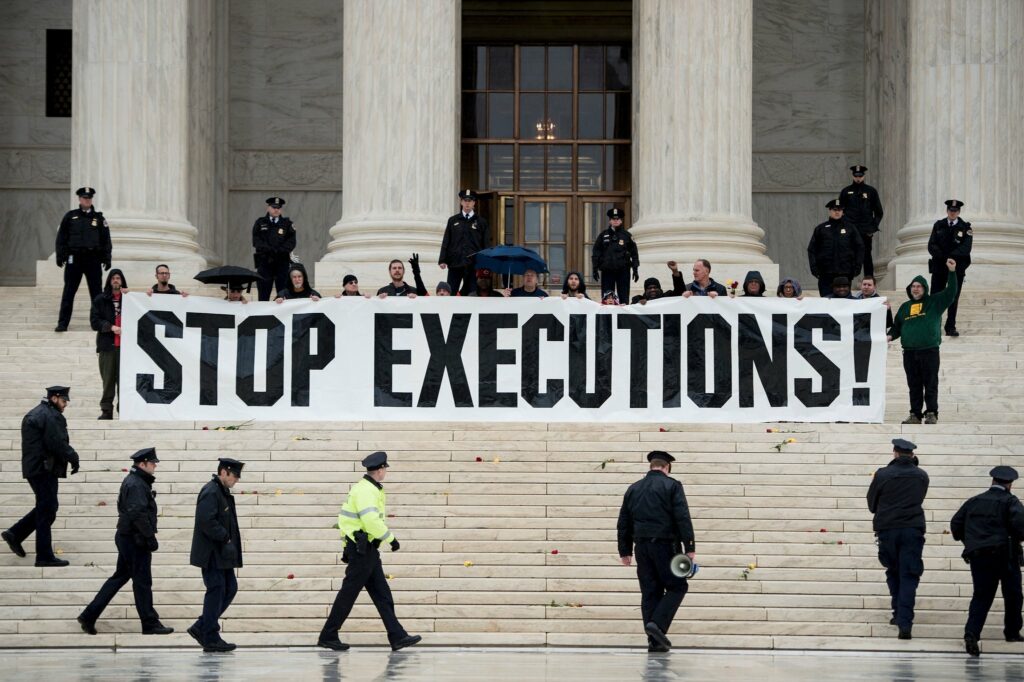 Last week, Trump and Barr executed Brandon Bernard even though he committed his crime when he was just 18 years old. Photo NYT

15 Dec 2020 – Donald Trump is on a killing spree. He is turning the anger and resentment which burnishes his brand into a virtually unprecedented string of federal executions. From 14 July 2020, when the attorney general, William Barr, restarted the federal death penalty by executing Daniel Lewis Lee, through last week, the administration has put ten people to death. Three more executions are on the docket in the days leading up to the inauguration of Joe Biden.

Last week, Trump and Barr executed Brandon Bernard even though his crime was committed when he was just 18 years old, and they killed Alfred Bourgeois even though his IQ put him in the intellectually disabled category.

Trump and Barr have turned the solemn process of punishment into an assembly line of death. In doing so they have shown themselves to be indifferent to history, inattentive to the troubling problems plaguing the federal death penalty, and out of step with the country they lead.

They are behaving like vigilantes or characters in Clint Eastwood’s movie Dirty Harry, killing not because the executions will make the US a safer, saner, or more just society – but simply because they can.

The Death Penalty Information Center reports that the last time an outgoing administration did anything remotely similar was more than a century ago, in 1889. Grover Cleveland, the first Democrat elected president after the civil war and the only one to serve two non-consecutive terms in office, ordered his administration to carry out three executions in the period between his electoral defeat and the inauguration of his successor in March 1889.

It’s also worth remembering that almost 50 years ago, the federal death penalty was held unconstitutional as part of the supreme court’s Furman v Georgia decision in 1972. Like capital punishment at the state level, it was found to be applied in an arbitrary and discriminatory manner. The federal death penalty was reinstated in 1988 and greatly expanded by the Federal Death Penalty Act of 1994.

Unfortunately, what was true in 1972 remained true when the federal death penalty was brought back and is true today.

The use of the death penalty continues to be tinged with racism and with the horrifying history of lynching, which has made it more popular in the deep south than in the rest of the US.

A Department of Justice study conducted in 2000 found significant racial disparities in the department’s own handling of capital charging decisions. It reported that from 1995 to 2000, minority defendants were involved in 80% of the cases federal prosecutors referred for consideration as capital prosecutions. In 72% of the cases approved for prosecution, the defendants were persons of color.

Today, members of racial minorities comprise 52% of the inmates awaiting execution at the federal penitentiary in Terre Haute, Indiana, a figure only slightly lower than the 55% on state death rows.

But race is not the only source of arbitrariness in the federal system. Geography plays a key role. Federal death verdicts, like those in the states, are concentrated in states from the former confederacy. Three of them – Texas, Missouri, and Virginia – account for 40% of the total.

Recognizing those problems, recent Democratic and Republican presidents showed restraint in using the ultimate sanction. Only three federal executions had been carried out since 1972, all during the George W Bush administration.

Timothy McVeigh was put to death in June, 2001 for blowing up the Oklahoma City federal building and killing 168 people. That same month, Juan Raul Garza was executed for his role in a drug cartel-related mass killing. In 2003, the federal government executed Louis Jones for the 1995 kidnapping, rape and murder of a female soldier.

Today, despite what would Trump have Americans think, his killing spree does not reflect what is going on with capital punishment across the country. Almost everywhere, the grievous errors, discriminatory application and frequent mishaps associated with America’s death penalty are recognized and acknowledged.

The result is that it is being used less and in fewer places. Over the last 30 years, death sentences and executions have declined steeply. In 2019, according to the Death Penalty Information Center, 34 people were given death sentences and 22 people were executed. This year, in part because of Covid-19, those numbers will be even lower.

Contrast this to the late 1990s, when more than 300 death sentences were handed out annually and almost 100 people were put to death.

Changes of these kinds are seen even in the most conservative states and in the heart of the death belt. Take Texas, which has long been thought of as the nation’s leader in capital punishment. In 1998, 48 people received a death sentence in Texas; in 2019, four. Twenty years ago, the state carried out 40 executions, the most in the United States. In 2019 it was nine.

Covid-19 also shines a light on how out of step Trump’s rush to execution really is. Responding to the pandemic and the special dangers it causes for lawyers, witnesses and the correctional personnel who have to carry out executions, many states have put executions on hold. Indeed, by the end of the year, only seven inmates will have been killed in five states – Alabama, Georgia, Missouri, Tennessee, and Texas.

But the Trump administration has shown no such compunction or concern. It has ignored the pleas of religious advisors and of families of murder victims who wished to be present at the death of the person who murdered their loved ones but were afraid of being exposed to the virus. They have disregarded the right of the condemned to the effective assistance of counsel, going forward with executions even if defense lawyers were not able to fully litigate outstanding legal issues or meet with their clients to secure their help in mounting meritorious appeals.

Trump’s execution spree manifests yet again his embrace of gratuitous violence as a centerpiece of his mode of governing. It is very much in character for someone who I have elsewhere labelled “America’s first vigilante president.”

Like others in the vigilante tradition, Trump is threatened by cultural diversity and uses violence against people whom he views as outsiders or as less than fully human. Unlike other vigilantes, however, Trump can enlist the apparatus of state violence, most especially the death penalty, against people who in his eyes are “dogs.”

As the president’s parting gift to America, his execution spree will leave behind a trail of dead bodies and a legacy of violence. This country should refuse this inheritance, as Americans come to terms within death penalty’s brutality and seek to “build back better” by creating a culture of dignity, respect, and honor for all who inhabit our land.