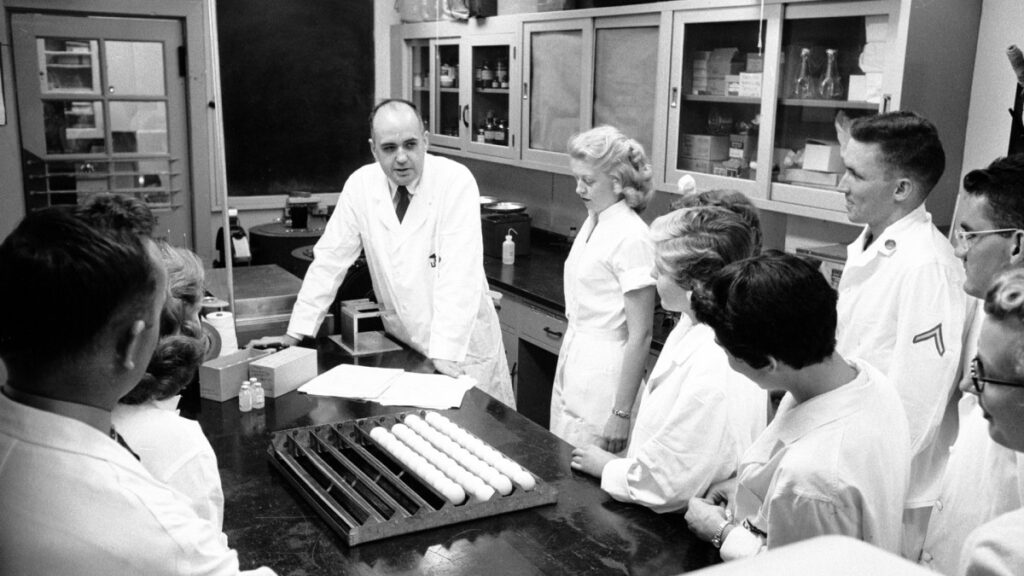 Documentaries about the biggest successes and the most controversial aspects of vaccines.

A. Documentaries about the success of vaccines:

Summary: “The greatest scientist of the 20th century, and no one knows his name. This documentary tells the inspiring story of Dr. Maurice Hilleman, a man with a singular, unwavering focus: to eliminate the diseases of children. From his poverty-stricken youth on the plains of Montana, he came to prevent pandemic flu, invent the measles-mumps-rubella (MMR) vaccine, and develop the first-ever vaccine against human cancer.

Responsible for more than half of the vaccines children receive today, he is credited with saving more than eight million lives every year. Now through exclusive interviews with Dr. Hilleman and his peers, rare archival footage, and 3-D animation, this film puts a human face to vaccine science, revealing the character that drove this bold, complex, and heroic man.”

Summary: “It was 1952, and polio gripped the world in fear. There was no known cause, no cure and no help in sight for parents desperate to protect their children. Across the ocean, eager to beat the potentially fatal condition, polio-afflicted President Roosevelt inspired the American public to send in their dimes to fund research. In just a few years Joseph Salk, an ambitious 33-year-old scientist working from his basement lab in Pittsburgh, would bring infantile paralysis to its knees and change the course of medical history. Bill Gates is interviewed along with a number of world-renowned experts and survivors to tell the extraordinary story of how Dr Salk and the legendary ‘march of dimes’ came together to help conquer polio.”

B. Documentaries about vaccine safety concerns:

Summary: “Vaccines have changed the world, largely eradicating a series of terrible diseases, from smallpox to polio to diphtheria, and likely adding decades to most of our life spans. But despite the gains — and numerous scientific studies indicating vaccine safety — a growing movement of parents remains fearful of vaccines. And in some American communities, significant numbers of parents have been rejecting vaccines altogether, raising new concerns about the return of vaccine-preventable diseases like measles and whooping cough.

In The Vaccine War, FRONTLINE lays bare the science of vaccine safety and examines the increasingly bitter debate between the public health establishment and a formidable populist coalition of parents, celebrities, politicians and activists who are armed with the latest social media tools — including Facebook, YouTube and Twitter — and are determined to resist pressure from the medical and public health establishments to vaccinate, despite established scientific consensus about vaccine safety.”

Summary: “Remember the swine flu scare of 1976? That was the year the U.S. government told us all that swine flu could turn out to be a killer that could spread across the nation, and Washington decided that every man, woman and child in the nation should get a shot to prevent a nation-wide outbreak, a pandemic. Well, 46 million of us obediently took the shot, and now 4,000 Americans are claiming damages from Uncle Sam amounting to three and a half billion dollars because of what happened when they took that shot. By far the greatest number of the claims – two thirds of them are for neurological damage, or even death, allegedly triggered by the flu shot.”

Summary: “The current [2009] wave of influenza is scaring people around the world. The virus of subtype A/H1N1 – better known as swine flu – is spreading rapidly. In June, the World Health Organization (WHO) intensified its warning of a pandemic and declared the highest alert level. Since then, the health authorities in all countries have been trying to control the spread.

Hundreds of millions of euros are being made available for medicines and vaccines. Tax money has probably never been spent so quickly and unchecked as in the fight against the new flu virus. Has a mass hysteria gripped us or is the new flu really a deadly threat? In either case, there are tangible interests at stake. More and more scientists are criticizing the actions of the authorities.”

Summary: “An investigation into how the CDC, the government agency charged with protecting the health of American citizens, destroyed data on a 2004 study that showed a link between the MMR vaccine and autism. This alarming deception has contributed to the skyrocketing increase of autism, potentially the most catastrophic epidemic of our lifetime.”

Critique: A critical review of the documentary and its claims on Wikipedia

Summary: “An exploration into a possible link between various vaccinations and illness, injury, and death.”

Critique: A critical review of the documentary and its claims by The Guardian

C. Documentaries about the HIV/AIDS controversy:

Summary: “What is HIV? What is AIDS? What is being done to cure it? The HIV/AIDS story is being rewritten, and this is the first film to present the uncensored views of many of the major players.”

Critique: A critical review of the documentary and its claims on Wikipedia

Summary: “Originally produced by Colman Jones for the “Toronto: Living with AIDS Project” starting back in 1990, later evolving into 4 one-hour programs for the MacLean-Hunter cable TV program Undercurrents, produced by Hans Burgschmidt and Mark Surman, who encouraged Colman to prepare this summary. The series won a MacLean-Hunter Lizzie Award in the Current Affairs category, received an Ontario Cable Television Association (OCTA) award, and was later rebroadcast in 1994 on the Rogers TV community cable channels in Toronto and Vancouver.”

Summary: “Did scientists inadvertently cause the AIDS epidemic? More than 20 years after the AIDS epidemic started, we still do not know its origins. Many believe that the answer is hidden in the research undertaken to find a cure to the polio epidemic. As the scientific community’s ethical responsibilities are called into question, the debate over the origins of AIDS rages on.”