Why Are Palestinians Being Forced to Prove Their Humanity?

For years I policed the language that I used to describe my oppressor. But what is happening in Sheikh Jarrah has a clear name: ethnic cleansing. 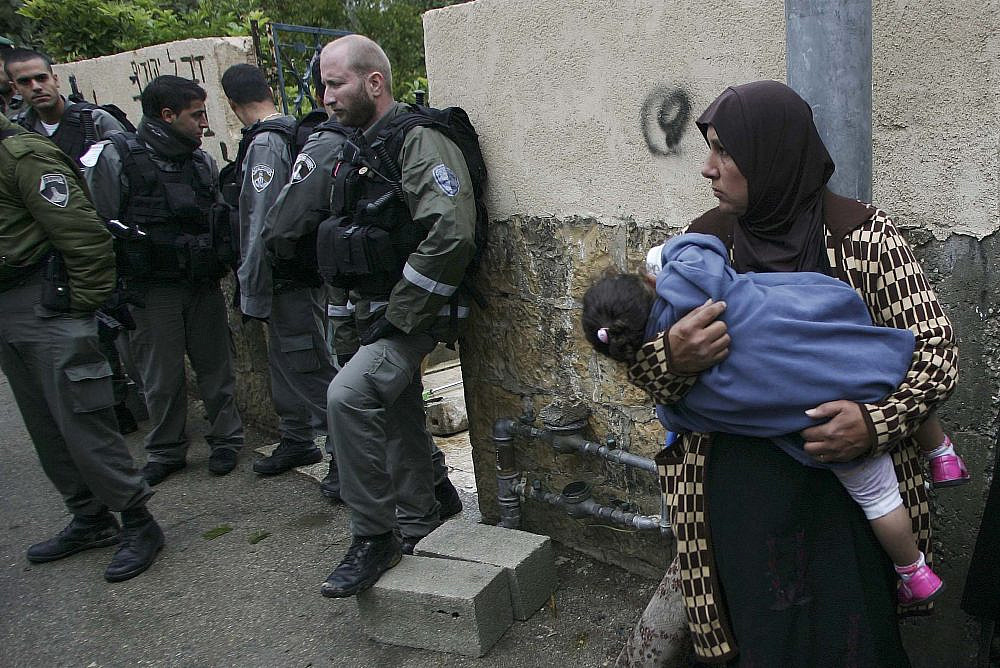 A Palestinian woman stands next to Israeli Border Police near the gate of a house in the East Jerusalem neighborhood of Sheikh Jarrah from which a Palestinian family was evicted. (Mohamar Awad/Flash90)

3 Dec 2020 – Over the last few months, the Israeli Magistrates’ Court of Jerusalem has ruled to displace at least 12 Palestinian families in the neighborhood of Sheikh Jarrah — including mine. Our homes, at any minute, might be taken by squatters backed by police. And it wouldn’t be the first time they do so.

In 1956, the UN Relief and Works Agency (UNRWA) and the Jordanian government built Sheikh Jarrah as a housing project for 28 Palestinian refugee families who had been expelled during the Nakba a few years earlier. Following Israel’s conquest of Jerusalem in 1967, settler groups have been attempting to seize the housing project by manipulating history and weaponizing racist laws and policies. Some attempts were successful, some postponed. In 2009, for example, settlers took over half of my family’s house in broad daylight; the other half awaits the final stroke of an Israeli judge’s pen.

Recognizing that there is scant legal recourse for Palestinians in a judicial system that was founded on ethnic supremacism, my twin sister Muna and I mobilized our friends and allies to run two media campaigns — one in Arabic and another in English — in an ambitious attempt to halt the forced evictions by spurring international action.

Muna, who recently graduated from Birzeit University with a journalism degree, didn’t encounter any problems engaging with Arabic-speaking audiences. To them, her plea for justice was self-evident. I, on the other hand, saw an immense chasm between Western understanding of my reality and the facts on the ground.

What is a historical fact in Arabic is somehow debatable in English. Well-documented events, such as Israel’s depopulation and destruction of hundreds of Palestinian villages, are considered “controversial.” Advocacy to save Sheikh Jarrah from the imminent threat of dispossession became buried under paragraphs of contextualization. To an American audience, the idea of Israel taking over my home is so unbelievable because they refuse to recognize Israel as a settler colonial state. But land grabbing is exactly what colonizers do. That isn’t something I should have to negotiate — if anything, it should be implied. 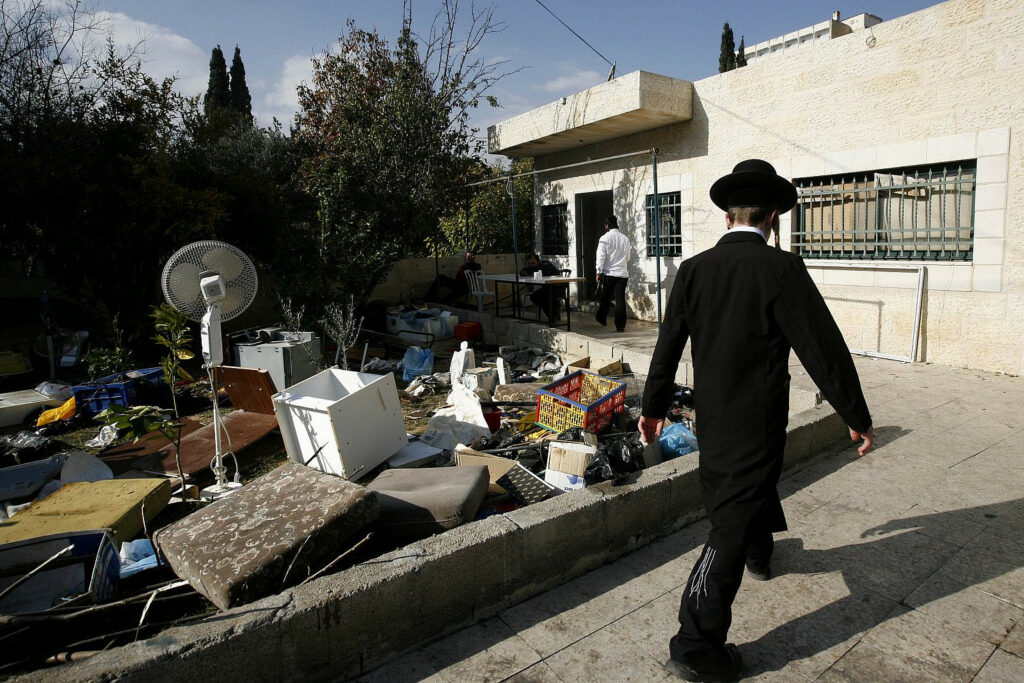 An ultra-Orthodox Jew walks past belongings thrown out from a Palestinian house in the neighborhood of Sheikh Jarrah in East Jerusalem.
(Miriam Alster/Flash90)

Denying Israel’s drawn-out and codified commitment to ethnic displacement not only legitimizes ignorance on Palestine, but enables Israeli subjugation to persist largely unabated. “I get that Israel isn’t the kindest to Palestinians,” someone commented in response to my Instagram post reporting the news from my neighborhood. “But [your post] is antisemitic and a dismissal of the Holocaust.”

My post, however, did not allude to the Holocaust or the Jewish faith: it highlighted that the home takeovers in Sheikh Jarrah are part of a calculated plan to erase Palestinian presence from our city. Systematic efforts to create ethnically homogenous geographies through the mass expulsion of unwanted populations have a name: ethnic cleansing. And that’s what I called it in my post. Yet when it comes to the region’s history of forced displacement, mass graves, annihilated villages, and the 6.5 million Palestinian refugees worldwide, the fact of ethnic cleansing becomes a claim, and a “contentious” one at that.

If your oppressor is the judge, to whom do you complain?

The perils of such comments lie not just in the intentional derailing of the point at hand — that colonizers have been systematically stealing our homes in Jerusalem for decades. More dangerously, it is the cruel comedy of reducing 72 years of settler colonialism, military occupation, and siege to mere “unkindness.”

Calling a spade a spade is the only clear way to address the systemic, ideologically-driven nature of these crimes. By addressing cases like my family’s as isolated, humanitarian, legal crises, the innate injustice of Israel’s judicial system is ignored. Legality is not synonymous with morality. We don’t need to look far to find unjust laws that were legally upheld and defended for years: the U.S. Constitution’s Three-Fifths Clause, Jim Crow laws, Apartheid in South Africa, and more. Putting an atrocity in a uniform — and calling it “unkindness” — doesn’t make it less atrocious.

But these fallacies aren’t anomalies: in fact, they control the narrative on Palestine. Be it on social media or university campuses, I can’t part my lips to speak about my experience of living in Jerusalem without having my integrity questioned; without being accused of complicity in atrocities I had no hand in. For years, I policed my language into palatability, carefully selecting the words with which I describe my oppressor so that they aren’t manipulated or misconstrued as antisemitism. I memorized the UN resolutions and international laws broken by Israel, and Israeli bulldozers still destroyed livelihood after livelihood. 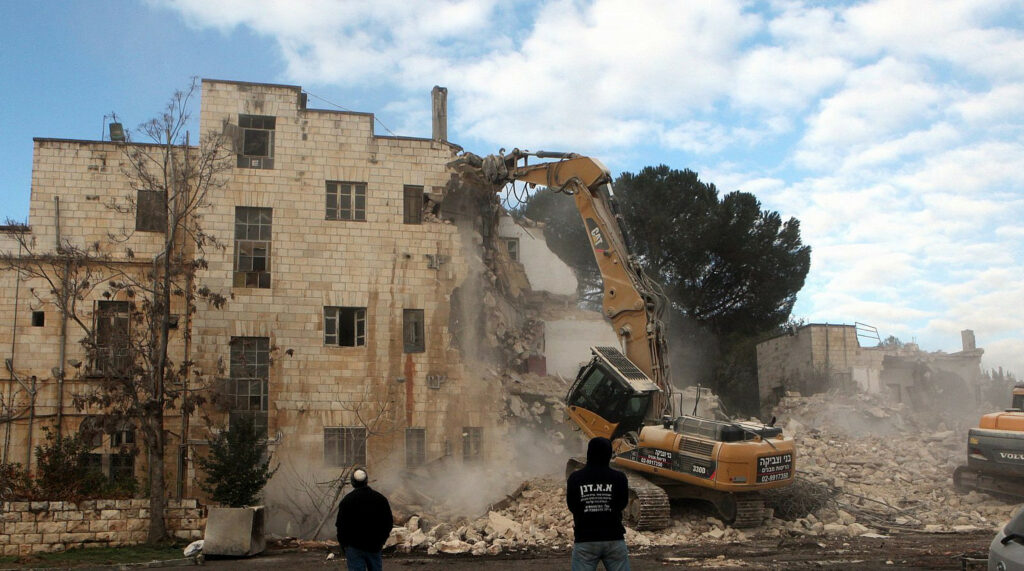 To avoid misconceptions, I don’t note that the colonizers seeking to take over my home are Jewish — even though they openly acknowledge that this is what gives them the divine decree to do so. I preface my talks by stating the obvious: “this isn’t about religion, it’s about land theft.” While writing this very article, I initially included a reference to Israeli historian Ilan Pappé, reinforcing the very idea I am seeking to challenge: that holding up the research of an Israeli will legitimize my use of the term “ethnic cleansing.”

I even wanted to mention Yonatan Yosef, a prominent Israeli rabbi and activist in the Judaization of East Jerusalem, as he gloats over “taking house after house” in my neighborhood “in continuation of the Zionist-Jewish project” — as if my experience can only be believed by his confirmation that “the State [was built] at the Arabs’ expense.” Or by the dozens of Israelis from far away settlements whom I witnessed gather in my neighborhood and chant, “In blood, in fire, we will kick out the Arabs!”

This muzzling of vocabulary isn’t new. Growing up, I was bewildered that Palestinian children throwing stones at Israeli military tanks generated more outrage than the tanks themselves. I clung to my nonviolent beliefs even harder because I thought my resistance would be deemed “acceptable.” There were always prerequisites to solidarity with my cause.

But frameworks of respectability and legality have offered me nothing except the illusion that I can partake in a game that was designed to make me lose. In reality, there isn’t a bug in the system that one can challenge. The scourge of dispossession in Jerusalem relies on the very vision of the Israeli settler colonial project in Palestine.

Moving beyond the politics of humanization

Beyond racist rhetoric, Israel has demolished tens of thousands of Palestinian homes since its invasive establishment, and will demolish many more. As such, there is nothing complex or ambiguous about this so-called “conflict.” It is clear who the aggressor is — statistically, historically, and materially.

And still, Palestinian suffering is trapped under a culture of disposability. We’ve been so demonized and alienated. To combat this vilification, many Palestinians, including myself until recently, chose to take the very problematic route of “proving” our humanity.

For example, Israeli police might flock to my neighborhood at any given moment and render half of its already dented population homeless; our properties will become fraternity houses from which settlers harass the remaining families into leaving. Yet I can’t just break this news and receive the outraged reaction one would expect. 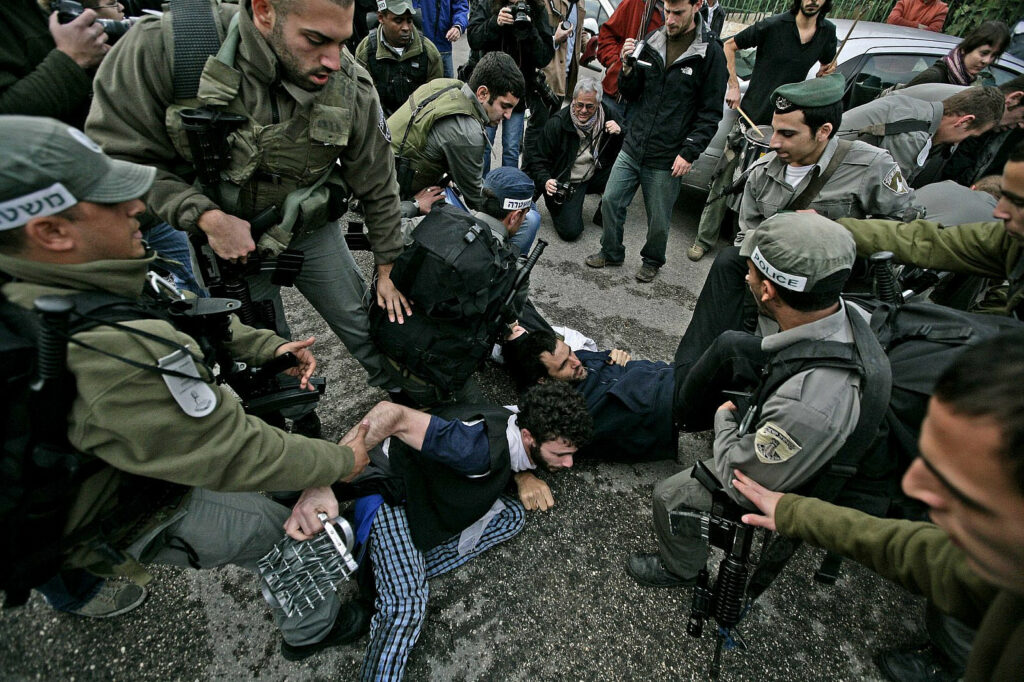 Instead, I have to specify that Sheikh Jarrah includes women and children. I mention my father’s seven decades and the fragility of my sister’s panic; I narrate my ribs bruised between a police officer’s baton and an electricity pole; I detail the accounts of filth and fury that have haunted me for the past decade. The reality of Israeli squatters wielding guns and parading them around our home, which they forcibly removed us from, isn’t enough: we also have to document images of our children sleeping on the streets, our elderly passed out on gurneys after assault, and our beaten teenagers with swollen, purple eyes.

Like every Palestinian, I have carried these stories since childhood, and the burden has only gotten heavier. I have felt it. I have lived through it. I have scars to prove it. It wakes me up at night.

But I don’t want to pimp my pain for sympathy. If someone can look at me, my family, my community, and not see human beings, then that’s on them. The need for humanization stems from decades of dehumanization, of chastising the victims rather than the perpetrators. Unless those systems of dehumanization are abolished, Palestinians will remain stuck in a vicious hamster wheel.

So, from now on, I want to call a spade a spade. What is happening in Sheikh Jarrah, like the rest of Palestine, is calculated ethnic cleansing.

As my family and neighbors ready themselves for the possibility of enduring a harsh winter and pandemic in the streets, we know that our fight will not end. This is bigger than Sheikh Jarrah. It is even bigger than Jerusalem, our native city, our capital. It is about the entirety of our homeland.

One day, I’ll talk to a therapist about this affliction. But at this moment, my focus is to shift the understanding of Palestine’s dispossession and the frameworks that enable it. Our movement won’t endure if it is predicated on pain. We need to create our own political discourse and demands, shattering the glass of spurious legality and escaping the stagnancy of the humanization game. If the world is to stand with us, I don’t want it to be because we’ve proven ourselves to be “worthy victims.” It must support us because ethnic cleansing, colonization, and military occupation should never be tolerated.

Mohammed El-Kurd is a writer and poet from Jerusalem, Palestine, currently studying in New York City. His work has appeared in The Nation, The Guardian, and Al-Jazeera.