Between Capitalism and Community 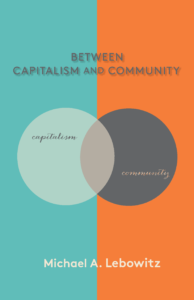 In this book, Michael Lebowitz deepens the arguments he made in his award-winning Beyond Capital. Karl Marx, in Capital, focused on capital and the capitalist class that is its embodiment. It is the endless accumulation of capital, its causes and consequences, that are central to Marx’s analysis. In taking this approach, Marx tended to obscure not only the centrality of capital’s “immanent drive” and “constant tendency” to divide the working class but also the political economy of the working class (“social production controlled by social foresight”). In Between Capitalism and Community, Lebowitz demonstrates that capitalism contains within itself elements of a different society, one of community.

Whereas Marx’s intellectual construct of capitalism treats it as an organic system that reproduces its premises of capital and wage-labor (including a working class that looks upon the requirements of capital “as self-evident natural laws”), Lebowitz argues that the struggle of workers in common and activities based upon solidarity point in the direction of the organic system of community, an alternative system that produces its own premises, communality, and recognition of the needs of others. If we are to escape the ultimate barbarism portended by the existing crisis of the earth system, the subordination of the system of capitalism by that of community is essential. Since the interregnum in which capitalism and community coexist is marked by the interpenetration and mutual deformation of both sides within this whole, however, the path to community cannot emerge spontaneously but requires a revolutionary party that stresses the development of the capacities of people through their protagonism.

This book should be mandatory for all economics, political science, and social philosophy classes. Comrades—especially younger ones—will find it immensely helpful for years to come. The sweep of the work is truly impressive; comprehensive and clear on everything essential for understanding the horrors of capitalism and the paths toward a better world. In this period of political madness, Lebowitz’s message of political hope could not be timelier.

This book is in the Monthly Review tradition of not only showing with great perspicacity the breadth and depth of Marx’s remarkable examination of capitalist society, but also understanding that radical scholars have an obligation to further deepen and extend Marx’s work. In twelve concisely and clearly written chapters, Lebowitz, among the best radical economists in the world, shows that in Capital, Marx failed to fully appreciate that the accumulation of capital results in two products—commodities of all kinds and the workers themselves. The latter, the ‘second product’ of capitalist production, is shaped by capital so that the working class is both badly divided and not fully cognizant of an all-encompassing alienation. Equally missing from Capital is a full grasp of how the collective actions of workers not only improve their life circumstances but also radically change them, preparing them to become society’s eventual protagonists, those who will abolish capitalism and create the collective commonwealth, which alone can overcome the multiple crises that now confront us, especially ecological disaster.

In this admirable and timely book Michael Lebowitz deepens and extends the understanding of capitalism that he developed in his prize-winning Beyond Capital. He argues persuasively that building critically on Marx’s conceptualisation of capitalism as an organic system is indispensable to diagnosing the ills of the contemporary world—in particular the growing ‘crisis of the Earth System’ that threatens to overwhelm us. In conclusion Lebowitz draws on his considerable practical experience of contemporary socialist movements to map out the path to Community—the alternative system that represents our sole means of escape from this crisis.

In this insightful contribution Michael Lebowitz continues to rigorously demonstrate the one sidedness of Marx’s understanding of capitalism in Capital and shifts Marxism, as a dialectical and systems view of the world, to new ground. A powerful theoretical argument is made for the system of organic community, both as crucial for Marxist thought and as a terrain of struggle to achieve the political economy of the working class. Lebowitz’s contribution is indispensable to the renewal of Marxism and socialism in the 21st century. It is essential reading to understand the importance of solidarity in these times of senile and catastrophic capitalism.

This book is a provocation, as much for traditional Marxists as for the various schools of nontraditional Marxism. It puts the question on the table of whether Marx’s Capital could be an obstacle for understanding class struggle and revolutionary practice. Michael Lebowitz questions what is taken for granted by the majority of Marxists. He draws conclusions from this critique, which also influences the offered vision of a non-capitalist future. This book, a peak in his series of interconnected books starting in 1992 with his Beyond Capital, is extremely important, scientifically as well as politically. It will provoke exactly the deep theoretical struggle that a non-dogmatic, non-authoritarian left needs.

For some time now Michael Lebowitz has been patiently and provocatively remaking our conception of Marx’s Capital and the potentials for human development. In standing against a ‘one-sided’ reading of Marx for an insistence on seeing workers struggling to make their own world, Lebowitz has pushed to the side stale, top-down theses of social transformation through statist planning set apart from workers’ organization and participation. Indeed, in his essential new book it is the building of workers’ capacities and communities that transforms circumstances and contexts in a process of contested reproduction against capital. This is a directive to think of community not as a romanticized place standing against the storms of an outside world, but community as a process of struggle to meet and self-govern over common needs against the ceaseless demands of accumulation, alienated work, and the vandalism of the earth. Could any text be more important to read, discuss and debate in the harsh times we face today?

Michael Lebowitz is certainly no faithful disciple of Marx. But he can claim to incarnate the best type of ‘Marxist’ that we need to break the circle of the capitalist rush to the destruction of the planet and the post-socialist ideological paralysis: resuming the critique of the economy at the point of Ricardo’s default, where Marx himself had backed, and pushing the dialectical idea of ‘contested reproduction’ to the lively conflict of the two histories that inhabit our world and our lives. A book as clear and straightforward as it is radical.

Michael A. Lebowitz is professor emeritus of economics at Simon Fraser University in Vancouver, Canada, and the author of several books including The Socialist Imperative, The Contradictions of “Real Socialism”, and The Socialist Alternative. He was Director, Program in Transformative Practice and Human Development, Centro Internacional Miranda, in Caracas, Venezuela, from 2006-11.

Michael A. Lebowitz is professor emeritus of economics at Simon Fraser University in Vancouver, Canada, and the author of several books including The Socialist Imperative, The Contradictions of “Real Socialism”, and The Socialist Alternative. He was Director, Program in Transformative Practice and Human Development, Centro Internacional Miranda, in Caracas, Venezuela, from 2006-11.