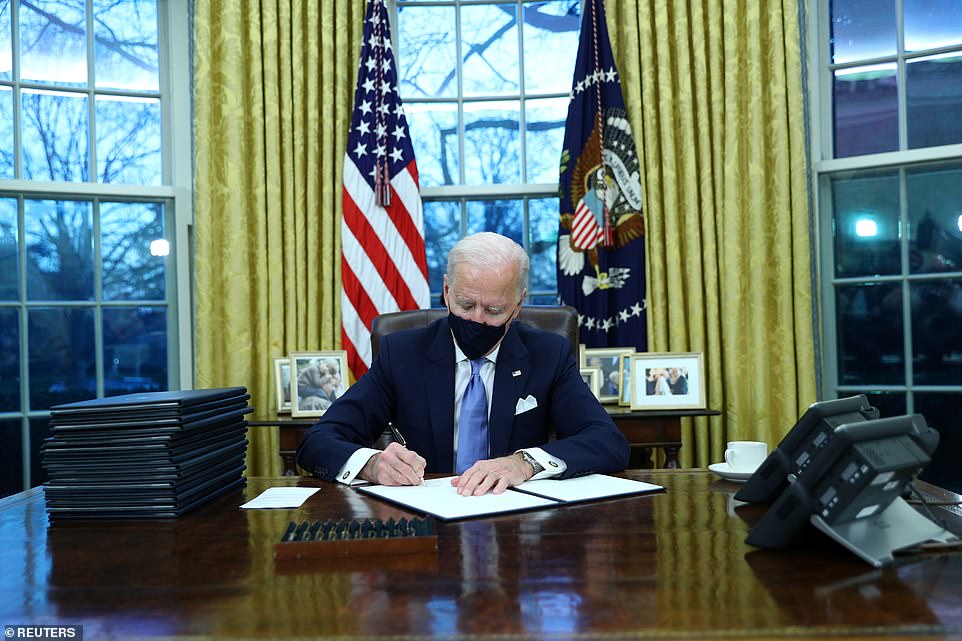 21 Jan 2021 – Joe Biden has signed his first slate of executive actions as president, erasing core aspects of Donald Trump’s legacy on the coronavirus pandemic, immigration, climate change, and more with the simple stroke of a pen.

Following an afternoon of ceremonies that included a virtual parade through Washington DC, and the laying of a wreath at the Tomb of the Unknown Soldier at Arlington National Cemetery in Virginia, the new administration immediately got to work at around 17.15 local time (12.15 GMT), rolling out 15 executive orders and two other action items.

“There’s no time to start like today,” the president said from the Oval Office’s Resolute Desk.

Mr Biden kicked off his presidency by issuing his much anticipated 100-day mask challenge to the country, pairing it with an executive order to mandate mask wearing in all federal buildings and during interstate travel.

“It’s requiring, as I said all along, where I have authority, mandating masks be worn, social distancing be kept on federal property,” Mr Biden explained to reporters in the Oval Office.

The president is also reorganising the way the White House’s institutional approach to the coronavirus pandemic, bringing back an Obama-era position within the administration entitled the Directorate for Global Health Security and Biodefense.

He has pegged transition advisor Jeff Zients to be his “Covid czar”, providing the president with daily briefings about vaccine distribution, testing supplies, the production and availability of personal protective equipment for health workers, and everything else related to the pandemic response.

Mr Biden will have the US formally rejoin the World Health Organisation (WHO), which Mr Trump left after accusing the global organisation’s leadership of being too cozy with China, the source of the virus that has shaken the world economy and health system.

On immigration, Mr Biden can pause or undo nearly every policy pursued by Mr Trump over the last four years.

One executive order from Wednesday revokes Mr Trump’s notorious “Muslim Ban”, which has restricted travel to the US from more than a dozen majority-Muslim countries.

Another bolsters the Deferred Action for Childhood Arrivals (Daca) programme instituted under Mr Obama that seeks to protect the legal status of so-called “Dreamers”, Americans who were brought to the US as children without documentation but have lived here basically their whole lives. Mr Biden’s executive order calls on Congress to pass a law providing an eight-year path to citizenship for those protected by Daca.

Mr Biden’s administration will be immediately issuing new guidance to officials at the Immigration and Customs Enforcement agency, a subsidiary of the Department of Homeland Security, that oversees immigration-related arrests and detention. That executive order will put an explicit stop to the Trump administration’s family separation policy.

Mr Biden will halt construction of Mr Trump’s wall along the US-Mexico border by revoking the national emergency declaration the former president issued in 2018 to siphon money away from other Pentagon projects.

And the new president will extend protections against deportation for thousands of Liberians living in the US, a programme Mr Trump had considered ending at multiple points over the last four years.

Indicating Mr Biden’s desire to reassert the US’ institutional influence throughout the world, the new administration will also be rejoining the Paris climate accords, a signature achievement of the Obama presidency that sought to reduce global carbon emissions and incentivise the production of green energy.

“We’re going to rejoin the Paris climate accord as of today,” Mr Biden proudly announced at his Oval Office signing ceremony.

Two of Mr Biden’s executive orders on Wednesday aim to provide immediate financial relief to the millions of Americans who have lost their jobs due to the pandemic.

One orders the Centres for Disease Control and Prevention, as well as three federal departments, to extend the moratoriums on evictions and foreclosures through 31 March.

The Departments of Agriculture, Housing and Urban Development, and Veterans Affairs guarantee more than 11 million mortgages, economic advisers to Mr Biden have pointed out.

The other financial relief-minded executive order extends the freeze placed on student loan debt collection through 30 September of this year.

Cognizant of the rampant allegations of corruption and the flagrant Hatch Act violations from top to bottom of Mr Trump’s administration, Mr Biden has signed an executive order mandating everyone who works in his administration to sign an ethics pledge. That pledge includes language honouring the Justice Department’s independence from executive influence.

While Mr Trump actively, publicly lobbied for preferential treatment from the Justice Department for his corrupt 2016 campaign aides Paul Manafort and Roger Stone, Mr Biden is going to great lengths to avoid even the appearance of intervening in various departmental probes, no matter who investigators are looking into.

Mr Biden inked his name on three executive orders to address racial disparities and inequities within the US government and its operations.

The first reverses a Trump-era order not to count undocumented immigrants living in the United States in the current census.

The US census, conducted every 10 years, is crucial to government operations. It is used to administer federal resources and apportion congressional seats. State legislatures use the census to draw new congressional boundaries if they have more or fewer House seats.

Another executive order calls on the federal bureaucracy to conduct reviews and isolate any racial inequities in how government resources are allocated. It also dissolves the 1776 Commission, Mr Trump’s advisory committee established last September to promote “patriotic education” in US public schools. Critics of the commission have said it whitewashes US history, giving young Americans a warped view of the country’s past.

The Biden administration plans to roll out a total of 53 executive actions over the next 10 days, many of which will directly undo Mr Trump’s policies.

Each day will have a particular theme.

The president reiterated that much of what he wants to do for the country will require working with Congress.

“We’re gonna need legislation for a lot of the other things we need to do,” he told reporters.