Judge Vanessa Baraitser’s decision to block the extradition of Julian Assange on health grounds was greeted with celebration outside the court and by millions more around the world, including in Assange’s home country of Australia. His closest associates hailed the court’s decision as a victory but warned that the fight to secure Assange’s freedom was far from over. 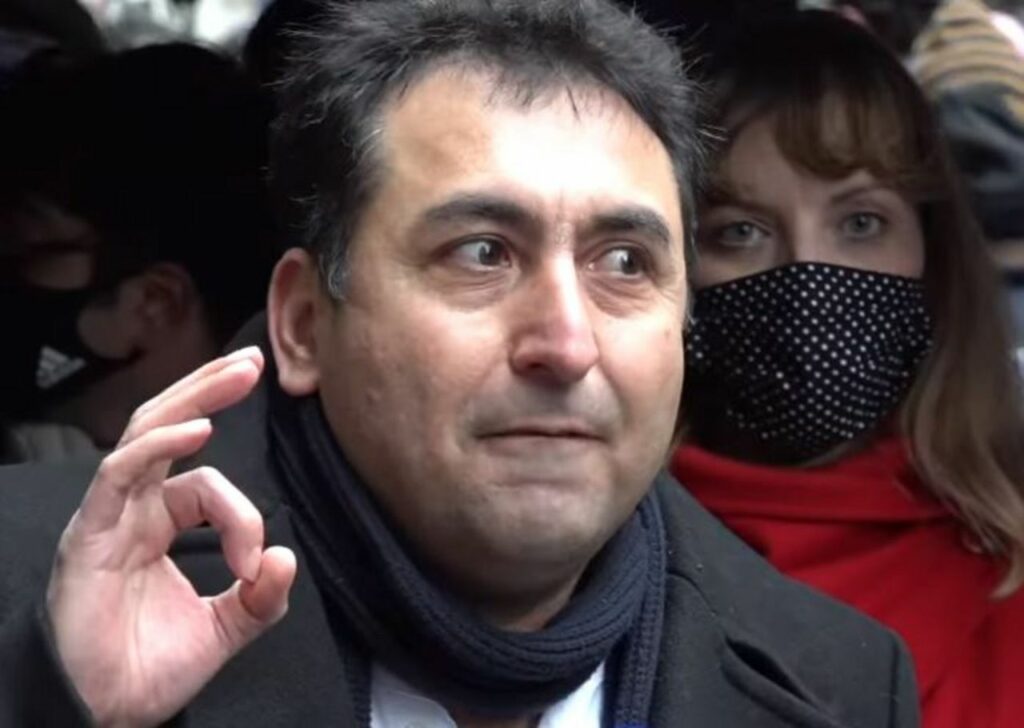 Fidel Narváez served as Consul at Ecuador’s embassy in London until 2018, where he became a friend to Assange. He thanked those gathered outside the court for “supporting freedom of expression, supporting Julian Assange, the man, the journalist, the activist, the freedom fighter”:

“This is a victory of all the people who never gave up. The British judicial system wanted to save face today. For those who were inside listening to the judge, it was like listening to the prosecutors’ opening statement. If it was not for the very, very fragile health conditions of Julian Assange, he would already be extradited.

“Every journalist should be concerned about what was said today in court. Because the political arguments provided by the United States were upheld by the British judicial system… It is only the doctors’ assessment of the fragile condition of the health of Julian Assange that has saved him from extradition.

“The judge had to recognise the appalling, the oppressive conditions of the US prison system under Special Administrative Measures for espionage cases and the risk that Julian might commit suicide if he is extradited. That is the only thing that stopped her. So be aware, that freedom of expression is still under attack.”

Narváez stressed that this was “a case not only about freedom of expression. It was also about human rights. It was a case about the right of political asylum… I feel ashamed about the decision of the Ecuadorian government in 2019 to hand Julian over the Americans and to the British.

“Let’s hope that Julian will be walking free, as he should. Too much damage has already been done. Who is going to compensate him for ten years of persecution, of defamation, of calling him a hacker, of calling him a rapist, of treating him as a criminal?

“This is the world upside down. The world criminals [get] impunity, the ones who reveal their crimes are still persecuted. But let’s celebrate this victory today. This victory belongs to all of you.” 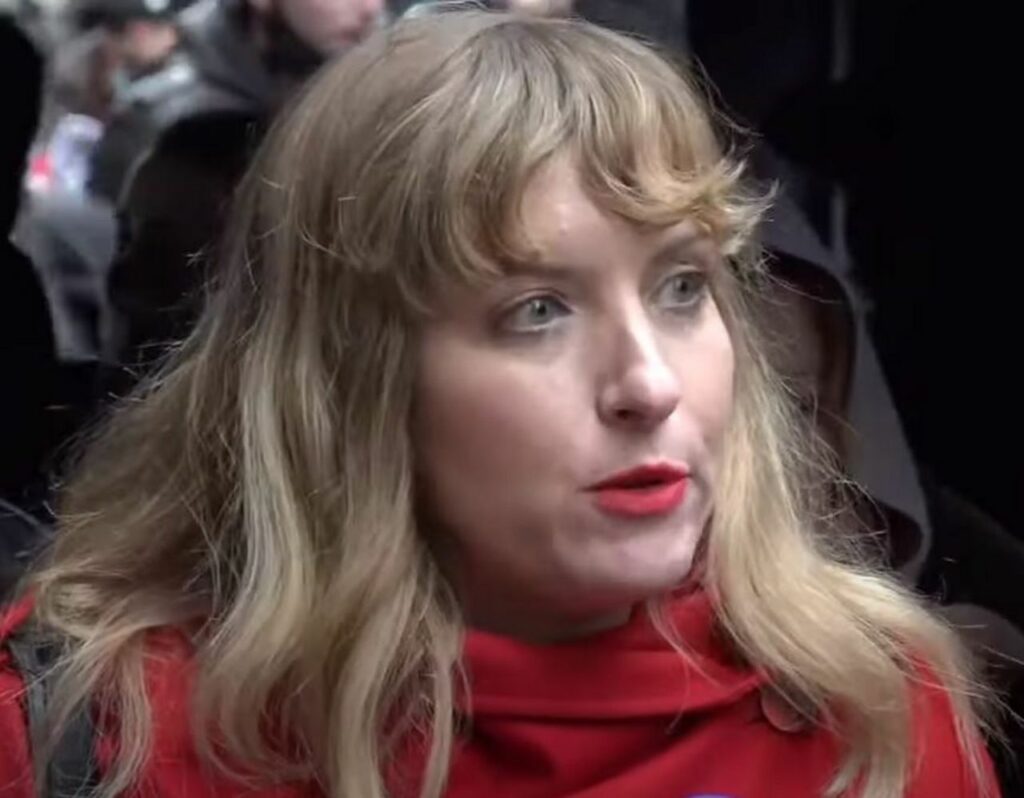 Rebecca Vincent, Director of International Campaigns for Reporters Without Borders (RSF) spoke of the ongoing threat to press freedom posed by Baraitser’s judgment.

“I will repeat today, that his extradition was a possible matter of life or death. So, in this regard, this was the right decision. But we are concerned by many other elements of what we heard this morning. It is very clear that on substantive grounds, this country would have handed Mr Assange over to the United States to face trial there.

“We remain convinced that Mr Assange has been targeted for his contributions to journalism. As we all know, the publication of leaked information informed extensive public interest reporting. The public had a right to these stories and the public still has a right to these types of stories.

“We are concerned that this decision leaves the door open for further prosecutions. If this happened to someone that did not suffer from the mental health issues that Mr Assange suffers, they could easily be handed over.”

Concluding her remarks, Vincent outlined the repressive methods employed by UK state authorities to block RSF’s trial monitoring activities over the past year. She said, “We have documented extensive and evolving barriers to open justice since day one of this case… But this morning, at the last hurdle, we were out here before 5am this morning and faced extensive police pressure. For the first time in my 15-year career, I repeatedly faced the threat of arrest this morning in attempting to get into a court to do my job, to monitor a case of concern. This is unacceptable in the United Kingdom in 2021.” 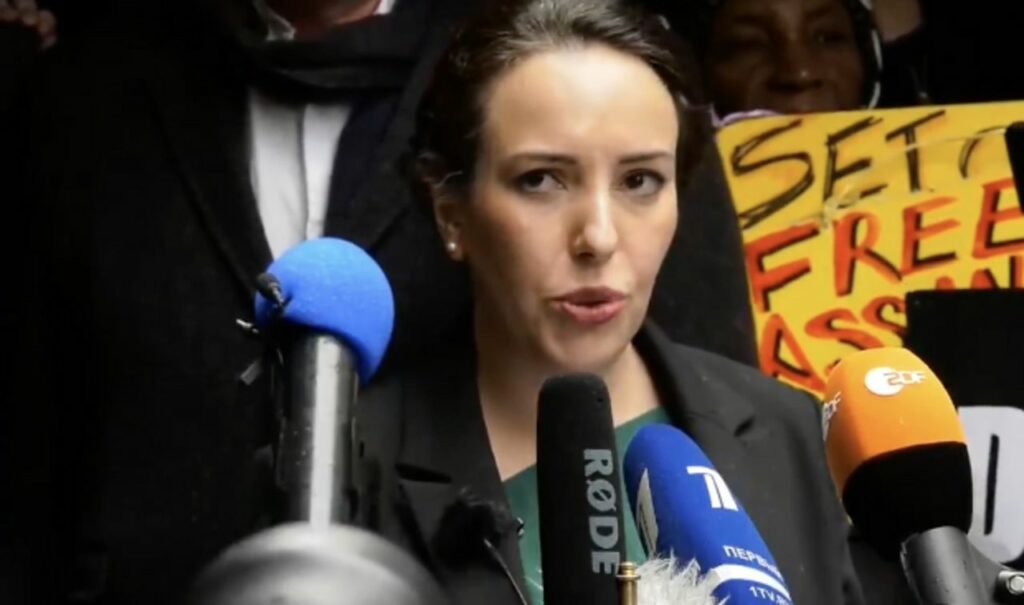 Assange’s partner, human rights lawyer Stella Moris, told supporters, “Please bear with me because I’ve had to rewrite my speech.

“Thank you for coming. I had hoped that today would be the day that Julian would come home. Today is not that day, but that day will come soon.

“As long as Julian has to endure suffering and isolation as an un-convicted prisoner in Belmarsh Prison and as long as our children continue to be bereft of their father’s love and affection, we cannot celebrate. We will celebrate the day he comes home.

“Today is a victory for Julian. Today is the first step towards justice in this case. We are pleased that the court has recognised the seriousness and inhumanity of what he has endured and what he faces. But let’s not forget, the indictment in the US has not been dropped.

“We are extremely concerned that the US government has decided to appeal this decision. It continues to want to punish Julian and make him disappear into the deepest darkest hole of the US prison system for the rest of his life.

“That can never happen. We will never accept that journalism is a crime in this country or any other. Let’s not forget that US agents plotted to kill Julian on British soil. His British solicitors were deliberately targeted by name and their documents were stolen. Their illegal operations even targeted our six-month-old baby. It is sickening and it is also a threat to everyone.

“On behalf of Julian and myself I want to thank the millions of people around the world and the institutions that are already calling for this persecution to end. I ask you all to shout louder, lobby harder, until he is free. 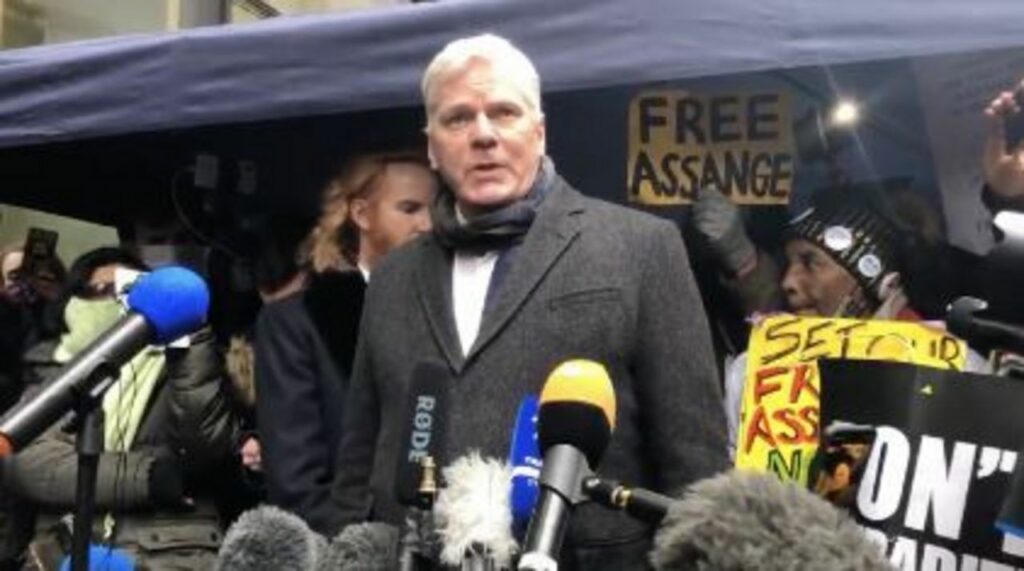 Kristinn Hrafnsson, WikiLeaks Editor-in-Chief, the final speaker, told the crowd, “We have all experienced a horrible year in 2020. It has been annus horribilis for most of us. But let’s remember that this was year ten in the situation of Julian Assange. But what a moment, a glimpse of hope, to start the New Year and hopefully a new era. It is a day, a day of a win for Julian Assange, but we have to be cautious, it is not necessarily a win for journalism.

“I want to thank the lawyers for their work in bringing this about. It is quite extraordinary, at this level, the Magistrates’ Court. I am concerned that, instantly, upon giving her decision, the lawyers for the US government indicated they would appeal the decision. They should not. And there should be a call out and pressure on the US side to drop the appeal, to say ‘enough is enough’. We have had enough of this. We have plenty to deal with in this New Year, but not this.”

Hrafnsson ended by warning, “Let’s be cautious in our victory celebration, because the fight is not over. As Stella said, it will not be over until Julian can go home and be with her and the boys.”