21 Jan 2021 – President Donald Trump ended his presidency by granting clemency to 144 individuals, including one of his top fascist advisers, Stephen Bannon. On his way out of the White House, Trump issued 74 pardons and commuted the sentences of 70 others.

While there were a number of pardons and commutations for those convicted of low-level drug and weapons offenses, the vast bulk were reserved for convicted felons who had ties to Trump and were previously found guilty of evading or falsifying taxes, money laundering, insider trading or defrauding the US government.

Despite much speculation, Trump did not preemptively pardon himself, members of his family or those in the Trump organization. His lawyers advised against pardoning himself in light of the upcoming impeachment trial in the Senate, arguing that a self-pardon could give the appearance of guilt.

Now that he is a private citizen, Trump is also expected to face numerous lawsuits, civil and possibly criminal, in state courts, which will not be covered by a federal pardon. His legal advisers argued that a self-pardon could negatively impact his defense.

Topping the list of notable criminals to receive a pardon is former chief strategist and senior White House counselor Stephen Bannon. Prior to becoming CEO of Trump’s 2016 election campaign, Bannon served as the executive chairman of Breitbart News, which, under his leadership, became the leading hate rag for the “alt-right.” 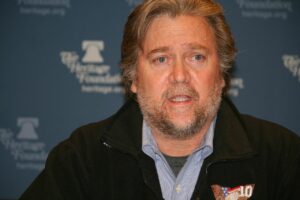 Bannon’s fascistic politics were welcomed on the campaign trail and in the White House. Through the slogan “America First,” Trump and Bannon articulated an ultranationalist, anti-immigrant, anti-Chinese, pseudo-populist message claiming to defend the interests of American workers by pitting them against their class brothers and sisters in Mexico, China and elsewhere around the world.

Bannon was forced out of his White House post after seven months during the fallout from the fascist “Unite the Right” rally in Charlottesville, Virginia in August 2017. There is speculation that it was Bannon who suggested that Trump say “there were fine people on both sides,” following the murder of antiracist activist Heather Heyer.

According to anonymous insiders cited by CNN and the Washington Post, there was considerable debate within the White House over the pardoning of Bannon, particularly in light of his role in the January 6 storming of the US Capitol. While legal advisers advised against a pardon, Trump, with an eye toward his continuing goal of building an American fascist movement, overrode their recommendations and granted the pardon.

That Trump’s decision to pardon Bannon was motivated above all by political considerations is underscored by his final public statements. Trump ended a video address aired Tuesday night by declaring, “The movement we started is only just beginning.” This was followed by remarks at Joint Base Andrews on Wednesday morning, where he closed out his speech with a menacing, “We will see you soon.”

Despite leaving the White House formally in 2017, Bannon has remained in contact with Trump throughout his presidency, including in the months following the 2020 election, when he, along with fascist White House advisor Stephen Miller, worked with Trump in the effort to overturn the election results.

It was reported on January 19 that an agency connected to Bannon sent 400,000 messages to Trump supporters urging them to attend the rally outside the White House on January 6 at which Trump urged his supporters to march on the Capitol and “take our country back.” The day before, during his January 5 “War Room” podcast, Bannon urged his listeners to descend on Washington D.C. promising, “All hell is going to break loose.”

Bannon used his pro-Trump and far-right credentials to fraudulently make money off of Trump’s supporters, according to federal prosecutors. He was indicted in August 2020 on two counts of conspiracy for defrauding donors of a private fundraising scheme he helped engineer, ostensibly to help finance the construction of Trump’s border wall against Mexico.

Bannon, along with associates Brian Kolfage, Andrew Badolato and Timothy Shea, set up an online crowdfunding site in 2018, claiming they would use “100 percent” of donated funds to help finance the border wall project. The campaign raised some $25 million from donors to pay for about five miles worth of border fencing in Texas and New Mexico. Prosecutors allege over $1 million was laundered by Bannon, Kolfage, Badolato and Shea to pay for credit card debts, home renovations, jewelry, cosmetic surgery and various other personal expenses.

Other notable Republican and Democratic politicians and operatives pardoned by Trump include:

* Elliott Broidy helped raise millions for Trump’s 2016 election campaign and afterwards served as the Republican National Committee’s national deputy finance chairman. Broidy pleaded guilty in 2020 to conspiring to violate the Foreign Agents Registration Act. He was attempting to lobby Trump on behalf of Malaysian billionaire Jho Low, the alleged fugitive mastermind behind the 1 MDB scandal. As part of a previous plea deal, Broidy admitted to accepting $9 million from Low in order to persuade the Trump administration to drop the Justice Department investigation into the massive corruption case.

* Kwame Kilpatrick is a former Democratic State House Representative (1997-2002) and mayor of Detroit (2002-2008). In March 2013, he was convicted of 24 federal charges of racketeering, mail fraud, extortion and filing false tax returns. In October 2013, he was sentenced to 28 years in federal prison. Federal prosecutors wrote that Kilpatrick used his political office as “a private profit machine.”

* George Gilmore is the former chairman of the Ocean County Republican Party and is regarded as a powerful Republican power broker in New Jersey. He was convicted in April 2019 on two counts of failing to hand over payroll taxes withheld from employees to the Internal Revenue Service and of making false statements on a bank loan application. Gilmore’s pardon was supported by former New Jersey governors Chris Christie, James McGreevey, James Florio and Donald DiFrancesco.

* Salomon Melgen is an eye doctor from West Palm Beach, Florida whose sentence was commuted by Trump. He was sentenced in 2018 to 17 years in prison for stealing some $73 million from Medicare by persuading elderly patients to undergo unnecessary procedures. Melgen had also been accused of bribing Democratic New Jersey Senator Robert Menendez to intercede on his behalf in the Medicare case. Menendez was indicted on corruption charges in 2017, but the trial resulted in a hung jury, and the Justice Department subsequently dropped the case. According to the White House, Menendez supported Melgen’s clemency.

In December, Trump also pardoned Charles Kushner, the father of his son-in-law Jared Kushner, as well as three former Republican congressmen: Chris Collins (New York), Steve Stockman (Texas) and Duncan Hunter (California). Hunter and Stockman had both pleaded guilty to misusing campaign funds for personal expenses, while Collins had pled guilty to an insider-trading scheme and for lying to the FBI.

In addition to the above, previous pardons issued by Trump during his presidency include the former fascistic sheriff of Maricopa County, Arizona, Joe Arpaio, who was the beneficiary of Trump’s first pardon in 2017. Arpaio was facing criminal contempt charges for defying a federal judge’s 2011 order to stop racially profiling Latinos, detaining them on suspicion of being undocumented and turning them over to federal immigration agencies.

Building up his fascistic base of support in the police and military, Trump followed his pardon of Arpaio with the 2019 pardoning of four war criminals, most notably US Special Operations Chief Edward Gallagher. Gallagher was accused by his squad mates of multiple murders and was photographed holding up the recently severed head of a teenager being held by US troops, whom Gallagher had gutted moments before.

This was followed last month by Trump’s pardon of four Blackwater mercenaries, Nicholas Slatten, Dustin Heard, Evan Liberty and Paul Slough. The four had been tried and convicted for their roles in the mass murder of civilians in Nisour Square, Baghdad during the Iraq War. At least 14 Iraqis between the ages of 9 and 77 were killed, and another 17 were injured.

While fascist coup plotters, war criminals, murderers , swindlers, cheats and convicted felons were granted clemency by Trump, there was no pardon for WikiLeaks founder Julian Assange or NSA whistleblower Edward Snowden. Assange remains a political prisoner in London’s Belmarsh Prison, and Snowden lives in forced exile in Russia. Their only “crimes” were revealing the crimes of the US government. Trump ignored the misdirected efforts of a section of those involved in the campaign for Assange’s freedom, who focused their activities on pleading for a pardon from a fascistic president.