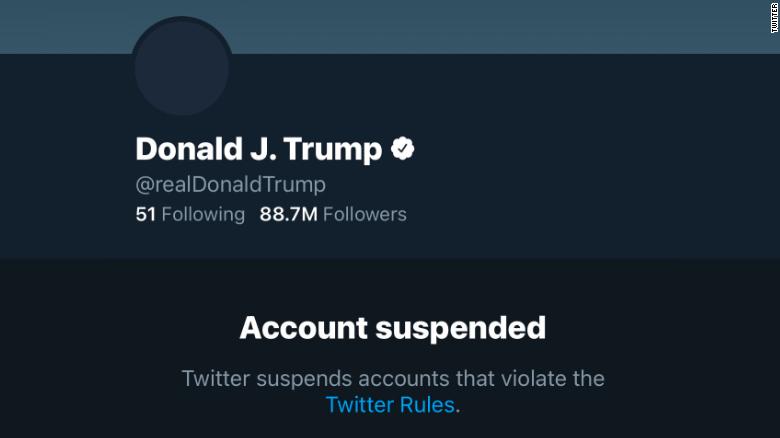 “After close review of recent Tweets from the @realDonaldTrump account and the context around them we have permanently suspended the account due to the risk of further incitement of violence,” Twitter said.

“In the context of horrific events this week, we made it clear on Wednesday that additional violations of the Twitter Rules would potentially result in this very course of action.”

Related:  It took an assault on Congress for Facebook and Twitter to draw a line on Trump

Twitter’s decision followed two tweets by Trump Friday afternoon that would end up being his last. The tweets violated the company’s policy against glorification of violence, Twitter said, and “these two Tweets must be read in the context of broader events in the country and the ways in which the President’s statements can be mobilized by different audiences, including to incite violence, as well as in the context of the pattern of behavior from this account in recent weeks.”

“The 75,000,000 great American Patriots who voted for me, AMERICA FIRST, and MAKE AMERICA GREAT AGAIN, will have a GIANT VOICE long into the future. They will not be disrespected or treated unfairly in any way, shape or form!!!”

The second indicated Trump did not plan to attend Joe Biden’s inauguration.

“To all of those who have asked, I will not be going to the Inauguration on January 20th.”

Twitter said the tweet concerning inauguration could be viewed as a further statement that the election was not legitimate. It also said that the tweet could be interpreted as Trump saying that the inauguration would be a “safe” target for violence because he would not be attending.

Trump’s other statement about American patriots suggested that “he plans to continue to support, empower, and shield those who believe he won the election,” Twitter said.

Twitter will enforce its policy against ban evasions to ensure that Trump does not circumvent his personal account’s suspension, the company told CNN.

“If it is clear that another account is being used for the purposes of evading a ban, it is also subject to suspension,” Twitter said in a statement. “For government accounts, such as @POTUS and @WhiteHouse, we will not suspend those accounts but will take action to limit their use. However, these accounts will be transitioned over to the new administration in due course and will not be suspended by Twitter unless absolutely necessary to alleviate real-world harm.”

Trump sought to test Twitter’s ban evasion policy at roughly 8:30 pm ET Friday evening, when he or someone acting on his behalf published four tweets from the @POTUS account.

“As I have been saying for a long time, Twitter has gone further and further in banning free speech, and tonight, Twitter employees have coordinated with the Democrats and the Radical Left in removing my account from their platform, to silence me,” Trump tweeted.

Twitter told CNN that the Trump campaign’s account has also been permanently banned. Before @TeamTrump was suspended, it had been seen sharing the same four-tweet thread that Trump had attempted to post from the @POTUS account.

Earlier in the evening, a White House pool report was distributed that contained the exact language that Trump had attempted to share from the @POTUS Twitter account.

Hahn argued it is nonsensical for journalists to be allowed to share Trump’s words but that the Trump campaign is not.

“A serious question that needs to be asked by journalists: If you post exactly what the president said will you be suspended as well? Because that is all we did,” Hahn said.

“There’s a difference between someone reporting on the President, and someone attempting to allow their account to be used by the president to essentially get around the ban,” a Twitter spokesperson said.

Jonathan Greenblatt, the CEO of the Anti-Defamation League, called it an “excellent step.”

“A fitting end to a legacy of spewing hate and vitriol,” Greenblatt said. “President Trump incited the violent riots at the Capitol using social media & paid the price.”