UK judge says WikiLeaks founder should not be extradited to face espionage charges because he is at risk of suicide. 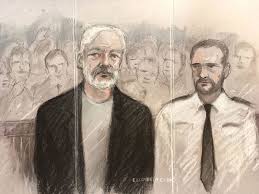 4 Jan 2021 – A British judge has ruled that Julian Assange should not be extradited to the United States to face espionage charges, saying that such a move would be “oppressive” because of the WikiLeaks founder’s mental health.

District Judge Vanessa Baraitser delivered the decision against the US authorities’ request on Monday, at the Old Bailey court in London.

Assange, 49, appeared in court wearing a navy suit and a mask, and showed little emotion at the ruling, simply wiping his brow.

His fiancee Stella Moris, with whom he has two sons, burst into tears and was embraced by WikiLeaks editor-in-chief Kristinn Hrafnsson.

Baraitser said he was “a depressed and sometimes despairing man” who had the “intellect and determination” to circumvent any suicide prevention measures taken by prison authorities.If imprisoned in the US, Australian-born Assange “faces the bleak prospect of severely restrictive detention conditions designed to remove physical contact and reduce social interaction and contact with the outside world to a bare minimum”, she said.

“He faces these prospects as someone with a diagnosis of clinical depression and persistent thoughts of suicide.

“I am satisfied that the risk that Mr Assange will commit suicide is a substantial one.”

The US government, which is attempting to prosecute Assange, reacted quickly as expected, saying it would appeal the decision.

Assange’s lawyers said they would ask for his release from Belmarsh, a maximum-security London prison where he has been held for almost two years, at a bail hearing on Wednesday.

In court, they argued that the case was political and an assault on journalism and freedom of speech.

Baraitser rejected that, however, saying there was insufficient evidence that prosecutors had been pressured by Donald Trump’s team and there was little evidence of hostility from the US president towards him.

She said there was no evidence that Assange would not get a fair trial in the US nor that prosecutors were seeking to punish him, and said his actions had gone beyond investigative journalism.

In the run-up to Monday’s decision, Assange had enjoyed a swell of support from press freedom advocates, who have been calling on US President Donald Trump to pardon him.

After the ruling, Assange’s supporters who had gathered since the early morning to rally outside the court celebrated, cheering and shouting “Free Assange!”

While rights groups and journalists globally welcomed Baraitser’s decision, they issued some caution.

“I am relieved the judge just ruled against extradition, however, I am very unhappy about how she stuck to all the major arguments put forward by the US to characterise Assange’s work as going beyond free speech and journalism,” investigative journalist Stefania Maurizi told Al Jazeera following the ruling.

Maurizi works for the Italian daily Il Fatto Quotidiano and has worked on all of WikiLeaks’s secret documents, included the 2010 documents for which Assange has been charged.

“I am also very concerned that Assange will remain in prison because it’s very likely the US will appeal: he is at serious risk physically and mentally.”

The US-based Freedom of the Press Foundation tweeted: “The extradition request was not decided on press freedom grounds; rather, the judge essentially ruled the US prison system was too repressive to extradite. However, the result will protect journalists everywhere.”

For now, 49-year-old Assange is expected to remain in jail in the UK, where his physical and mental health have declined.

The case could eventually lead to the United Kingdom’s Supreme Court.

“Assange is a journalist and deserves a chance, I am in favor of pardoning him,” Lopez Obrador told his regular news conference on Monday.

“We’ll give him protection.”

US prosecutors have indicted Assange on 17 espionage charges and one charge of computer misuse. The charges carry a maximum sentence of 175 years in prison.

Assange’s lawyers argue that the case is politically motivated, and that he was acting as a journalist and is entitled to First Amendment protections of freedom of speech for publishing leaked documents that exposed US military wrongdoing in Iraq and Afghanistan.

Assange and WikiLeaks shot to fame in April 2010, after the website released a 39-minute video of a US military Apache helicopter firing over and killing more than a dozen Iraqis, including two Reuters journalists.

Al Jazeera’s Neave Barker, reporting from outside the Old Bailey, said Monday’s decision would come “as a blow” to the prosecution.

“We are talking potentially about many many more months, or many more years, of legal wrangling to go when it comes to deciding Julian Assange’s future,” he said.

“He is seen very much as a thorn in the side to many governments, not just the US government, and as a man who has jeopardised state secrets, undermined state security and the safety of undercover agents working in very difficult situations in challenging parts of the world.”