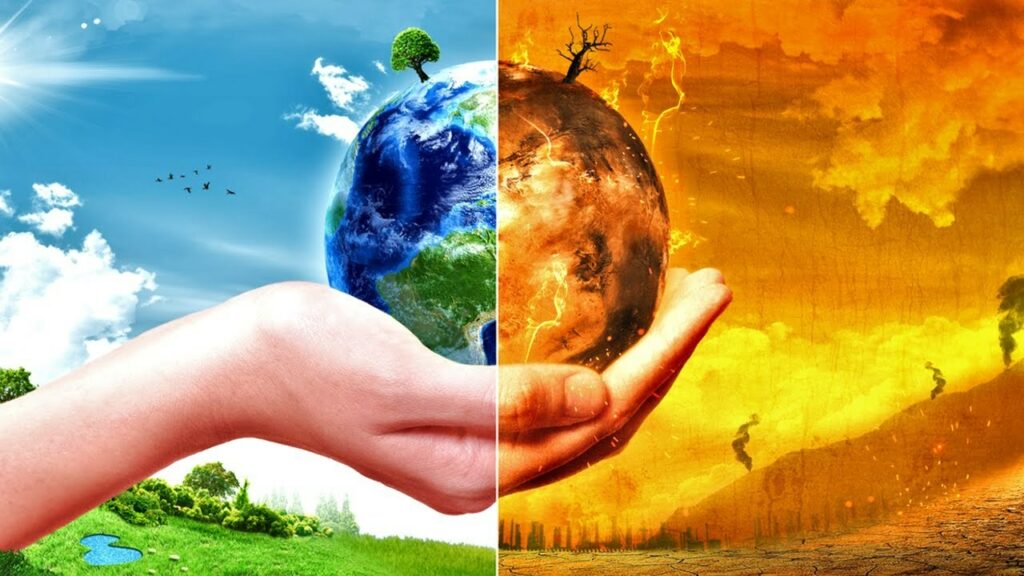 [The “Art” here begins with the painting of a human hand holding our transforming, endangered world. The “Literature” is in the article by Robert Hunziker. It is acutely written “Journalism,” but it goes deeper than mere reporting–far deeper than the kind of drivel one finds all over TV and “social media” these days. How can we understand the “pandemonium” of hellish choices and consequences of the past 50 years and of even greater catastrophes approaching during the next 50 years!

What can artists do–painters, musicians, cinematographers, poets, et. al.–to warn the mesmerized public? Our self-enraptured media publish or post lies or silly memes and tropes, while hard facts about our endangered, life-support wetlands, our perilously decreasing bio-diversity, declining quality of oxygen and water, proliferation of unknown chemicals–and many other salient concerns and assaults mentioned in this article–are blithely passed over in the rumbles between various groups of the uninformed and misinformed.

Here’s a work of Art to inform, challenge and inspire other Artists to sound the alarms, to beat the drums, to sing the anthems. – Gary Corseri]

22 Jan 2021 – Throughout the world, scientists are speaking out like never before. They’re talking about an emergency situation of the health of the planet threatening “complex life,” including, by default, human life.

It’s scary stuff. On this subject, America’s green NGOs prefer to address the danger by sticking to a middle ground, don’t scare people, too much doom and gloom backfires, turns people off, it’s counterproductive.

However, emergencies have been happening for some time now. So, it’s kinda hard to ignore. In fact, that’s why it’s so obviously easy to declare emergencies today, yesterday, and the day before yesterday and many yesterdays before that. In other words, the house has been on fire for some time but the fire engines never show up.

A recent fundamental study discusses the all-important issue of failing support of complex life: “Humanity is causing a rapid loss of biodiversity and, with it, Earth’s ability to support complex life.” (Source: Corey J.A. Bradshaw, et al, Underestimating the Challenges of Avoiding a Ghastly Future, Frontiers in Conservation Science, January 13, 2021)

The ramifications are unnerving. Accordingly, Earth’s ability to support complex life is officially at risk. That’s what the scientists are implying within the meaning of the article’s title: “Understanding the Challenges of Avoiding a Ghastly Future.”

Indeed, the article identifies a life or death chronology, or summation, of all of the emergencies already underway. That’s real! Moreover, the risk of a “ghastly future” is not taken lightly; rather, the heavily researched article includes high-powered renowned scientists authoring one of the most significant articles of the 21st century, boldly describing risks of an offbeat pathway to a ghastly future, therefore begging the question of what a ghastly future really looks like.

An armchair description of a ghastly future is a planet wheezing, coughing, and gasping for air, searching for non-toxic water, as biodiversity dwindles to nothingness alongside excessive levels of atmospheric CO2-e, bringing on too much heat for complex life to survive. Sound familiar? In part, it is.

Along the way, the irretrievable loss of vertebrates, or complex life forms like wild mammals, birds, reptiles, and amphibians have reduced to 5% of the planet’s total biomass.  The remaining 95%: (1) livestock (59%) and (2) humans (36%). (Bradshaw, et al) How long does that cozy relationship last?

It’ll likely last for decades, maybe, but probably not for centuries. But then again, nobody really knows for sure how long it’ll last. Meanwhile, the human version of complex life resides in comfortable artificial lifestyles framed by cement, steel, glass, wood, and plastic, and surrounded by harmful fertilizers, toxic insecticides, and tons of untested chemicals. There are more than 80,000 chemicals registered for use in the U.S., most of which have not been studied for safety or toxicity to humans. (Source: It Could Take Centuries for EPA to Test all the Unregulated Chemicals Under a New Landmark Bill, PBS News Hour, June, 22, 2016)

As a consequence of how artificial lifestyles influence how people view the world, it’s no surprise that Disneyland is a huge success, a big hit, with its flawless artificiality that offers a comfort zone for families within its mastery of hilarious bio-diverse imagery, all fake.

But, while Disneyland prospers, biodiversity is on a slippery slope, barely hanging on for dear life at 5% of total biomass. Once that final 5% goes down the drain, which now looks promising, human life will be all that remains along with herds of cows, pens of pigs, and coops of chickens. Phew!

Already, it is mind-blowing that two-thirds of wild vertebrate species have disappeared from the face of the planet within only 50 years, a world-class speed record for extinction events. At that rate, the infamous Anthropocene will usher in the bleakest century since commencement of the Holocene Epoch of the past 10,000-plus years, especially in consideration of the remorseful fact that, over the past 300 years, global wetlands have been reduced to 15% of their original composition.

That one fact alone, as highlighted in the Bradshaw report, describes an enormous hole in the lifeblood of the planet. Wetlands are the “kidneys for the world’s landscape” (a) cleansing water (b) mitigating floods (c) recharging underground aquifers, and (d) providing habitat for biodiversity. What else does that?

Once wetlands are gone, there’s no hope for complex life support systems. And, how will aquifers be recharged? Aquifers are the world’s most important water supply. Yet, NASA says 13 of the planet’s 37 largest aquifers are classified as overstressed because they have almost no new water flowing in to offset usage. No wetlands, no replenishment. Ipso facto, the Middle East is on special alert!

Meanwhile, dying crumbling ecosystems all across the world are dropping like flies with kelp forests down >40%, coral reefs down >50%, and 40% of all plant life endangered, as well as massive insect losses of 70% to 90% in some regions approaching wholesale annihilation. It’s entirely possible that the planet has never before experienced this rate of loss.

Alas, the loss of biodiversity brings a plethora of reductions in associated benefits of a healthy planet:

Barring a universal all-hands-on-deck recovery effort of Earth’s support systems for complex life, e.g., revival of wetlands, it’s difficult to conceive of a future without the protection of Hazmat suits.

Integral to the continual loss of nature’s bounty, an overcrowded planet brings in its wake regenerative resource limitations. Accordingly, some estimates claim 700-800 million people already are currently starving and 1-2 billion malnourished and unable to function fully. Um, does that describe life or is it sub-life?

One of the most telling statistics within the Bradshaw report states: “Simultaneous with population growth, humanity’s consumption as a fraction of Earth’s regenerative capacity has grown from ~ 73% in 1960 to 170% in 2016.” Ipso facto, humans are consuming more than one Earth. How long does that last, especially considering the deflating fact that regeneration turned negative, circa 1970s?

Ecological overshoot is a centerpiece of the loss of biodiversity: “This massive ecological overshoot is largely enabled by the increasing use of fossil fuels. These convenient fuels have allowed us to decouple human demand from biological regeneration: 85% of commercial energy, 65% of fibers, and most plastics are now produced from fossil fuels. Also, food production depends on fossil-fuel input, with every unit of food energy produced requiring a multiple in fossil-fuel energy (e.g., 3 × for high-consuming countries like Canada, Australia, USA, and China; overshootday.org).” (Bradshaw, et al).

As loss of biodiversity delves deeper into the lifeblood of the planet, it becomes a festering problem that knows no end. Still, “stopping biodiversity loss is nowhere close to the top of any country’s priorities, trailing far behind other concerns such as employment, healthcare, economic growth, or currency stability. It is therefore no surprise that none of the Aichi Biodiversity Targets for 2020 set at the Convention on Biological Diversity’s (CBD.int) 2010 conference was met.” (Bradshaw, et al) No surprise there.

Making matters much, much worse: “Most of the nature-related United Nations Sustainable Development Goals (SDGs) (e.g., SDGs 6, 13–15) are also on track for failure.” (Bradshaw, et al) No surprise there.

“Even the World Economic Forum, which is captive of dangerous green-washing propaganda, now recognizes biodiversity loss as one of the top threats to the global economy.” (Bradshaw, et al) No surprise there.

So, where, when, and how are solutions to be found? As stated above, there’s no shortage of ideas, but nobody does the work because solutions are overwhelming, too expensive, too complicated. Yet, plans are underway to send people to Mars!

Meanwhile, the irrepressible global warming fiasco is subject of a spaghetti-type formula of voluntary commitments by nations of the world (Paris 2015) to contain the CO2-e villain, all of which has proven to be nightmarishly inadequate. Human-induced greenhouse gases continue hitting record levels year-over-year. That’s the antithesis of success. According to the Bradshaw report: “Without such commitments, the projected rise of Earth’s temperature will be catastrophic for biodiversity.” Hmm- maybe declare one more emergency, yes, no?

Alas, it’s difficult to imagine loss of biodiversity beyond what’s already happened with 2/3rds of wild vertebrate life gone in only 40-50 years. Also, not to forget invertebrates, when’s the last time a bug splattered on a windshield anywhere in America?

Looking ahead, the best advice may be to make preparations for universal pandemonium, which coincidentally is the namesake of the Capitol (Pandemonium) of Hell in John Milton’s Paradise Lost, circa 17th century England.

What to do? Maybe forego any new emergency declarations (the current crop of emergencies, like impending loss of The Great Barrier Reef, are already happening and too much to absorb) and remediation plans that go nowhere, leaving behind a stream of broken promises and false hope, especially after so many years of broken promises and protocols and meetings and orgs that go nowhere, but meanwhile, they preach stewardship of the planet. What’s with that?

Postscript: The scale of the threats to the biosphere and all its life forms—including humanity—is in fact so great that it is difficult to grasp for even well informed experts. (Underestimating the Challenges of Avoiding a Ghastly Future)

Robert Hunziker is an independent writer from Los Angeles.