NASA’s Mars Rover Successfully Touches Down on the Red Planet

Perseverance is now set to begin a two-year mission to roam the Martian surface and search for signs of ancient microbial life. 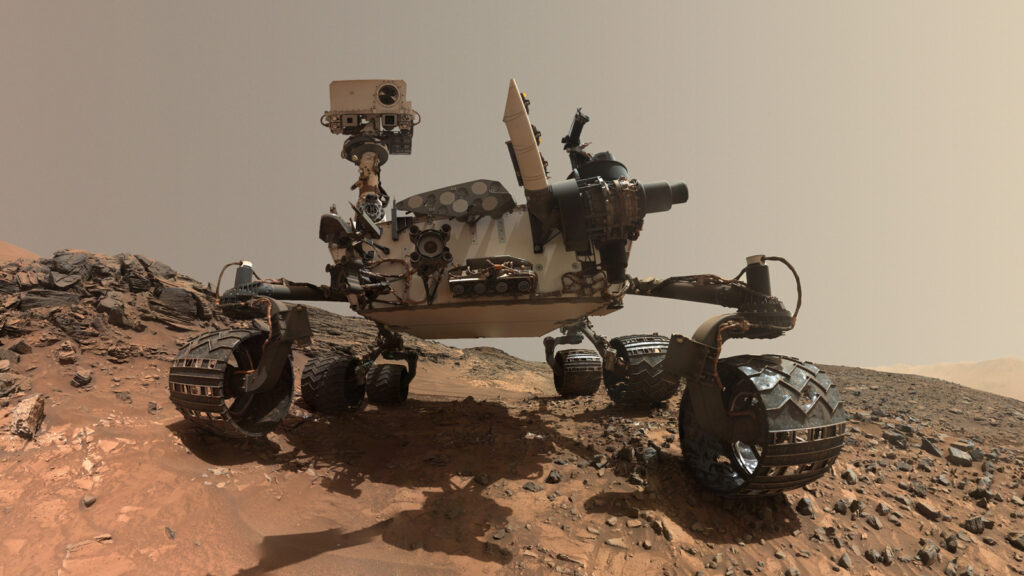 18 Feb 2021 – NASA kicked off a new era of Mars exploration today with the successful landing of Perseverance, a car-size robotic explorer that will search for traces of ancient life on the planet and collect what could be the first rocky samples from Mars that are sent back to Earth.

The rover touched down at around 3:55 p.m. ET, after executing a daring and dramatic landing that had been nicknamed the “seven minutes of terror.” Perseverance is now NASA’s fifth rover to land on Mars and is set to begin a two-year mission to roam its surface and search for signs of ancient microbial life.

It is also the latest of three new missions that arrived at the red planet in February. Earlier this month, two other spacecraft launched by the United Arab Emirates and China reached Mars and moved into orbit around the planet.

The much-anticipated Perseverance mission could answer key questions about Mars’ history and evolution, but it’s also a crucial stepping stone toward NASA’s goal of sending humans to explore the red planet.

Touchdown confirmed. The #CountdownToMars is complete, but the mission is just beginning. pic.twitter.com/UvOyXQhhN9

For now, mission planners at the agency’s Jet Propulsion Laboratory in Pasadena, California, are breathing a huge sigh of relief. Only around half of all previous attempts to land on Mars have succeeded, and the Perseverance rover’s planned touchdown was considered the riskiest and most challenging.

“I’m amazed that everything went pretty much according to plan,” Steve Jurczyk, NASA’s acting administrator, said Thursday in a post-landing news briefing. “When I heard the touchdown signal come back and saw the first image, I cannot tell you how overcome with emotion I was and how happy I was.”

NASA is expecting big rewards from the $3 billion Perseverance mission. The rover is not only the agency’s most sophisticated robotic explorer, but it’s also the first stage of a broader initiative to collect samples of Martian rocks and sediments and send them to Earth.

These efforts will help pave the way for human exploration of the red planet, said Janet Ivey, president of Explore Mars, a nonprofit organization that advocates for sending astronauts to Mars.

“There’s a real probability that the Perseverance mission increases the chances of seeing humans on Mars in my lifetime,” she said. “We’re really embarking on the grandest adventure.”

The rover will spend the next few days taking pictures of its surroundings as mission controllers on Earth monitor the health of the spacecraft and its instruments. Engineers will then upload new flight software so that Perseverance can get to work.

“Now the amazing science starts,” said Thomas Zurbuchen, associate administrator for the NASA’s science mission directorate. “Every yard on the surface of Mars is a yard for Mars sample return.”

The Perseverance rover landed in an area of Mars known as the Jezero Crater, a 28-mile-wide basin that lies just north of the Martian equator.

There is evidence that an ancient river once flowed into Jezero, forming a delta billions of years ago that had all the right ingredients for life to arise. It’s in this region that Perseverance will be able to inspect rocks as old as 3.6 billion years and search for biosignatures, or traces of organic matter, in the Martian sediments.

“We expect the best places to look for biosignatures would be in Jezero’s lakebed or in shoreline sediments that could be encrusted with carbonate minerals, which are especially good at preserving certain kinds of fossilized life on Earth,” Ken Williford, deputy project scientist for the Perseverance mission at the Jet Propulsion Laboratory, said in a statement. “But as we search for evidence of ancient microbes on an ancient alien world, it’s important to keep an open mind.”

The Perseverance rover, which launched into space in July 2020, is equipped with a drill, a 7-foot-long robotic arm and seven different science instruments.

The rover is also carrying a small helicopter, dubbed Ingenuity, that will be used to attempt the first controlled flight on another planet. If successful, the helicopter technology could be groundbreaking for planetary science, said Robert Zubrin, author of “The Case for Mars” and founder of The Mars Society, a nonprofit organization that advocates for human exploration of the red planet.

“Rovers can travel a couple hundred meters a day, but a flight vehicle could do that in a couple seconds,” Zubrin said. “Ten years from now, we could send helicopters to Mars that fly around, land somewhere and let loose rovers to do some science in a specific area. That would be fantastic.”

In addition to the helicopter test, the Perseverance rover will take measurements of Martian weather, monitor dust storms, use radar instruments to probe geologic features underground and conduct experiments to see if oxygen for breathing and propellant can be produced from Mars’ carbon dioxide-rich atmosphere — an essential concern if NASA intends to eventually send astronauts to the red planet.

“If we go to Mars, we can’t rely on sending everything from Earth,” said Chris Carberry, co-founder and CEO of Explore Mars. “This experiment is designed to see if we can live off the land.”

Perseverance will also collect samples of Martian rocks and sediments in tubes that will be stored for future missions. The rover is capable of gathering more than 30 separate samples, according to NASA.

For the next phase of the sample-return initiative, NASA has partnered with the European Space Agency. A subsequent mission will first deploy a small rover to retrieve the cached samples, load them into a single canister and then launch it into orbit around Mars. The third and final stage involves sending a spacecraft to capture the basketball-size container from Mars orbit and finally return to Earth in 2031.

This frenzy of activity means Mars will likely be the focus of a lot of attention over the next decade. Perseverance’s arrival at Mars was preceded by the two other spacecraft — launched by the UAE and China — that are also beginning new missions at the red planet.

The Hope probe, designed to operate as a weather satellite around the red planet, successfully slipped into Mars orbit on Feb. 9, making the UAE only the fifth nation or entity to achieve such a feat. Less than 24 hours later, China’s Tianwen-1 orbiter and rover also safely entered into orbit around Mars, marking a significant accomplishment for the country’s rapidly advancing space program.

Few details have been made public about China’s Tianwen-1 mission, but the orbiter is designed to circle the red planet and map the Martian surface using a radar instrument that can measure properties of soil and water-ice. China will attempt to land its rover on Mars sometime in May.

The attention on the red planet from multiple space agencies could be a boon for planetary science and Mars exploration. “It’s exciting because it’s not just one country — everybody’s eyes are on Mars,” Ivey said.

She added that the Perseverance mission is a welcome distraction from the past year, when the world was first upended by the coronavirus pandemic.

Denise Chow is a reporter for NBC News Science focused on general science and climate change.