These Six Global Struggles Show the Power of Nonviolence in Action

3 Feb 2021 – From India and Palestine to Canada, these ongoing campaigns demonstrate how ordinary people are mobilizing for worker’s rights and an end to war. 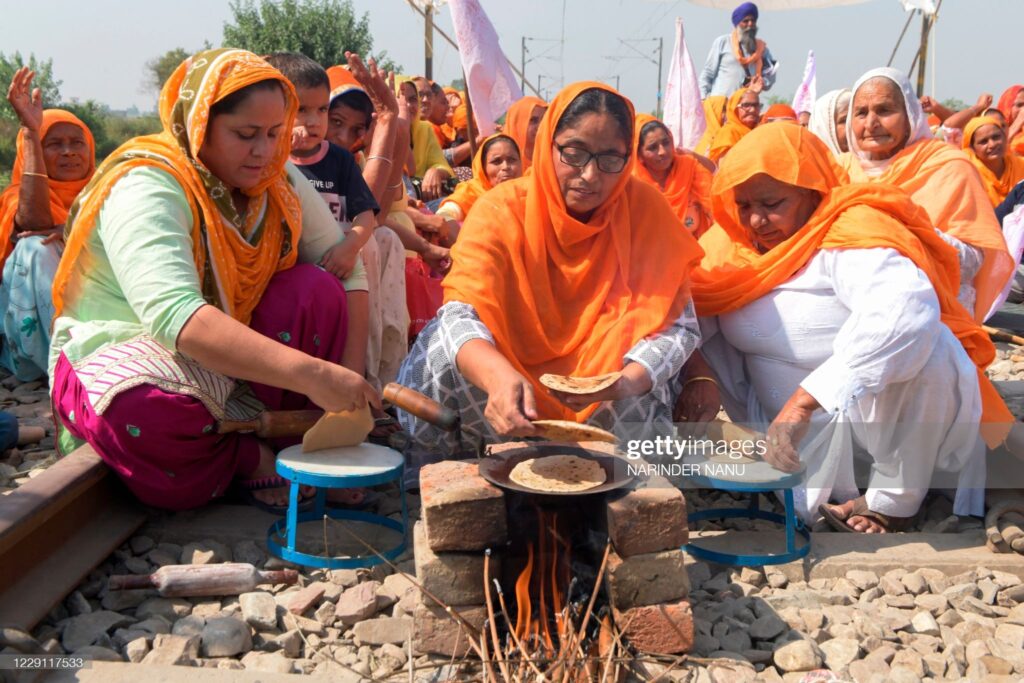 Women farmers prepare roti bread (chapattis) as they block a railway track during a protest against the recent passing of agriculture reform bills in the parliament on the outskirts of Amritsar on October 17, 2020.
(Photo by NARINDER NANU / AFP) (Photo by NARINDER NANU/AFP via Getty Images)

In today’s media world — especially if you live inside the U.S. media bubble — if you hear news about foreign countries, it tends to be about business, political leaders, wars or disasters. Overall, it presents a dismal view of our fellow citizens — not to mention a disempowering one. But here are six of the many stories of ongoing nonviolent campaigns for change in countries across the world. They show the agency and power of ordinary people working for justice, rights, peace and dignity. They show that people don’t have to hold wealth, weapons or traditional power to be powerful. Instead, they need community, connection and some tools of nonviolent action.1. India’s women farmers reassert their place and presence in farmer protests: India’s farmer protests have captured headlines around the world — as well they should. They are the largest protests in human history. On Jan. 18, Mahila Kisan Diwas (Women Farmers’ Day), women farmers across India demonstrated to reassert their place in the ongoing farmers’ struggle against Modi’s neoliberal agricultural laws. This action was organized in part to redress gender imbalances, particularly around media coverage that cut women out of the struggle’s story.

Due to the impacts of global patriarchy, women in movements have often needed to correct the record, rebalance who’s in the room and invited to the table, and (re)assert their pivotal roles in creating change. Studies show that women play powerful roles in nonviolent movements. They were at the heart of Sudan’s 2019 nonviolent revolution against a 30-year dictatorship. They propelled Chile’s recent constitutional revision campaign so decisively that the slogan for the re-write is “never again without women.” And, in India, women and women farmers have been organizing mass demonstrations, general strikes and protest encampments in such large numbers that they’ve consistently broken world records over and over in the past two years. It’s important to get the story straight!

Due to the impacts of global patriarchy, women in movements have often needed to correct the record.

2. Striking Palestinian workers triumph: Much of the news about Palestine is heart wrenching and tragic. We hear of bombings, orchards being razed, houses bulldozed and more abuses of Israeli occupation. Yet, here is a nonviolent campaign that is significant because the Palestinian workers not only won human and labor rights, they also won an apology for the racist comments their Israeli employer made. During the 19 days of an open-ended strike, the workers lost all wages and were threatened with being fired and replaced with other workers. But they persevered, and they won. (A word of caution: the strike’s agreement must still be upheld by an Israeli court.)

Palestinian organizers are heartened by the news. The secretary of the trade unions in Palestine said, “We hope that this small victory is the beginning of other victories for our workers and our people that have been subjugated by Israel’s inhumane apartheid and settler colonial oppression.” They also credited international solidarity and words of encouragement from global workers with helping them persevere and succeed.

3. In Sri Lanka, hundreds of tea plantation workers strike to defend jobs and social rights: In Sri Lanka, workers on tea plantations are unionized, but due to lack of action by union leadership, Gartemore Estate workers have been on a wildcat strike (a strike without union approval) since the end of December. After the Gartemore Estate sold off a portion of its lands, the workers feared the erosion of their rights and the loss of their jobs under the new management. They are worried that the current owner plans to develop tourist facilities on the estate instead of tea, which would drastically reduce the workforce. Some workers also fear that important personal documents, including birth and death certificates, health and other family papers, currently in the estate office would not be protected under the new management. The strike organizers are demanding a written agreement — not a verbal promise — that outlines a set of demands to protect workers around these issues.

4. Doctors in Peru launch hunger strike over lack of protections and equipment: Since the start of the pandemic, Peru’s healthcare workers have been using nonviolent action to push for improved protections and equipment. Now, at least four doctors began a hunger strike as a protest against the substandard working conditions. Medical personnel have been protesting for a week just as a second wave of coronavirus cases is hitting the country. They’re not alone. Medical worker strikes have been erupting around the world. Just two weeks ago, medical students in Ecuador won similar demands after walking off the job and withstanding police repression. Will the Peruvian doctors succeed? Time will tell.

These workers are up against the “fire and rehire” policies that the pandemic’s economic impacts have aggravated.

5. Oil workers strike in Kazakhstan: More than 60 oil workers have gone on strike in Kazakhstan’s northwestern region, seeking a salary increase. The workers walked out on Jan. 29 saying that their monthly salaries of about $160 should be doubled, as they currently fail to allow them to provide for their families. They could find solidarity with the office employees of a British gas company, who have held numerous strike actions over substandard wages. These workers — and those in many other industries — are up against the “fire and rehire” policies that the pandemic’s economic impacts have aggravated.

6. Canadians block weapons trucks going to the Yemen War: Serious about halting the Yemen War, Canadians blocked a caravan of trucks hauling armored vehicles and other weapons to shipping locations headed for Saudi Arabia. Sitting down in front of the wheels, stretching banners across the roads, and risking arrest were a few of the tactics used. The direct action in Hamilton, Ontario coincides with hundreds of events to pressure the Biden administration, and other governments, to stop arming Saudi Arabia. Their action is reminiscent of the ways Italian dock workers have repeatedly refused to load weapons onto ships headed to Saudi Arabia in opposition of the Yemen War.

These six nonviolent campaigns are just a fraction of the stories Nonviolence News collects and circulates week after week, both in the United States and abroad. (You can read more in this week’s round-up here and sign-up to the newsletter to receive it in your inbox.) These stories reveal that nonviolent action is a global phenomenon — and that it’s being used for everything from peace to increased wages to human rights and health protections and more. Each struggle has unique lessons to offer all of us in our organizing work. At the same time, these stories also remind us of our common humanity — and that ordinary people everywhere are striving for justice, peace and fairness.