Who Bought the $4.5 Trillion Added in One Year to the Incredibly Spiking US National Debt, Now at $27.9 Trillion?

Someone had to buy every dollar of this monstrous debt. Here’s Who. The Fed isn’t the only one. But China continues to unwind its holdings.

17 Feb 2021 – Driven by stimulus and bailouts, and fired up by the tax cuts and by grease and pork, the Incredibly Spiking US National Debt has skyrocketed by $4.55 trillion in 12 months, to $27.86 trillion, after having already spiked by $1.4 trillion in the prior 12 months, which had been the Good Times. These trillions are all Treasury Securities that form the US national debt, and someone had to buy every single one of these securities: 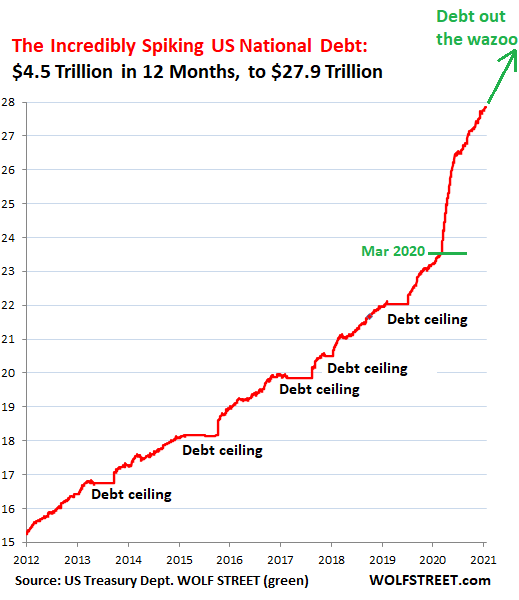 So we’ll piece together who bought those trillions of dollars in Treasury Securities that have whooshed by over the past 12 months.

Share of Foreign Holders Falls to 25% for First Time since 2007:

In the fourth quarter, foreign central banks, foreign government entities, and foreign private-sector entities such as companies, banks, bond funds, and individuals, reduced their holdings by $35 billion from the third quarter, to $7.04 trillion. This was still up from a year ago by $192 billion (blue line, right scale in the chart below). But their share of the Incredibly Spiking US National Debt fell to 25.4%, the lowest since 2007 (red line, right scale): 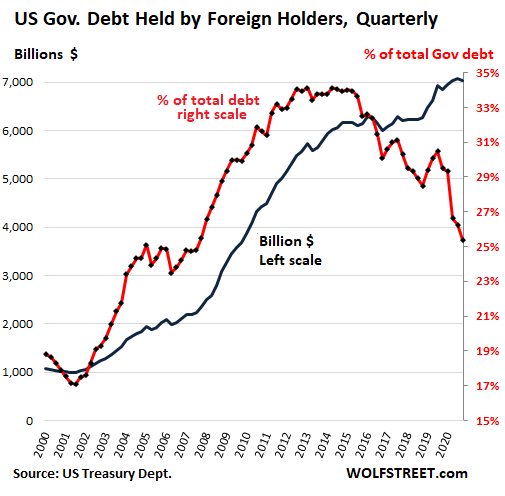 Japan (blue line), the largest foreign creditor of the US, reduced its holdings in Q4 by $20 billion, to $1.26 trillion. But compared to a year earlier, its holdings were still up by $102 billion.

China (red line) continued on trend, gradually reducing its holdings. In Q4, its holdings ticked down just a tad, and over the 12-month period fell by $8 billion, to $1.06 trillion: 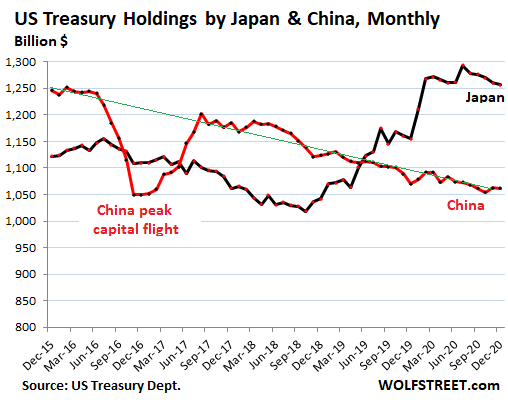 Japan’s and China’s relative importance in the Incredibly Spiking US National Debt continues to decline, with their combined total ($2.32 trillion) now down to a share of 8.4%, the lowest in years: 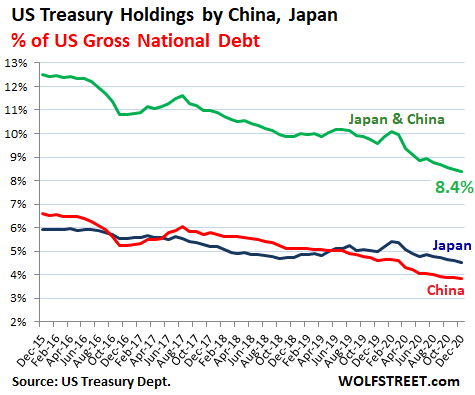 The Next 10 biggest foreign holders in December include tax havens and financial centers where US corporations have legal entities that hold US Treasuries, such as Ireland. So some of these “foreign” holders are US cash-rich corporations, such as Apple, with Treasuries that are registered in their foreign mailbox entities.

But Mexico and Germany, with which the US has the second and third largest goods trade deficits (behind China) are in 24th and 20th place respectively and didn’t make this list. The amounts in parenthesis show holdings of 12 months ago:

US Government Funds Add Treasuries but Their Share Declines Further, Outrun by the Incredibly Spiking US National Debt

The US Social Security Trust Fund, pension funds for federal civilian employees, pension funds for the US military, and other federal government funds added $178 billion in Q4 compared to Q3 and $74 billion over the 12-month period, to their holdings, now amounting to record of $6.1 trillion (blue line, left scale). But the share of the Incredibly Spiking US National Debt, at 22% same as in Q3, was the lowest in eons, and was down from 45% in 2008 (red line, right scale): 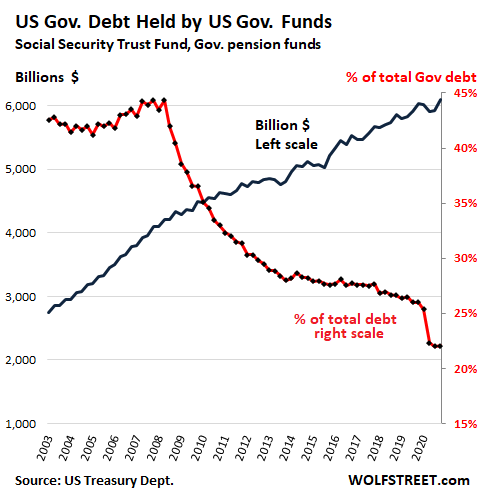 Federal Reserve Monetization of the US Debt

The Fed added $253 billion to its Treasury holdings in Q4, bringing the pile to $4.7 trillion by the end of December (blue line, left scale), a record share of 17.5% of the Incredibly Spiking US National Debt (red line, right scale). Over the 12-month period, the Fed added $2.37 trillion in Treasuries to its holdings, more than doubling its pile: 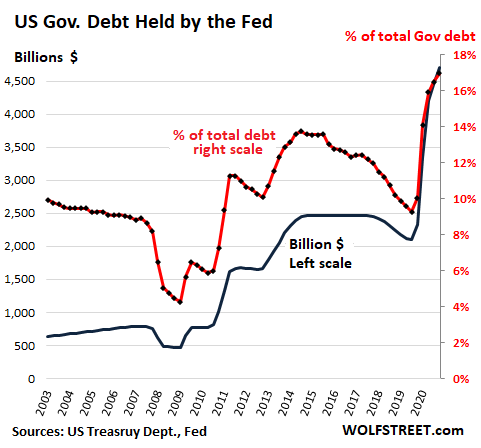 US Banks Stock Up on Treasuries

US commercial banks added $24 billion in Treasury securities in Q4 to their holdings, and $277 billion over the 12 months, bringing the total to a record $1.21 trillion, according to the Federal Reserve’s data release on bank balance sheets. They now hold 4.4% of the Incredibly Spiking US National Debt: 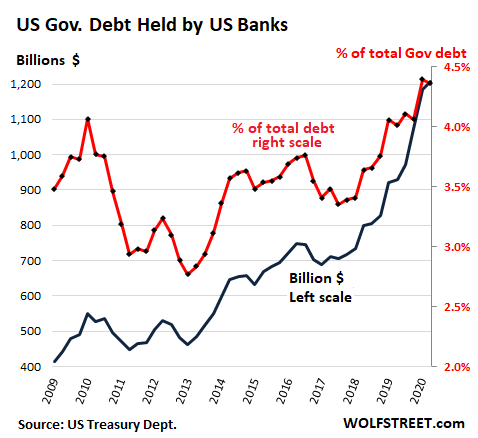 After all foreign-registered holders, the Fed, US government funds, and US banks are accounted for, the remaining Treasuries are by definition held by US individuals and institutions. These include bond funds, pension funds, insurers, US corporations, hedge funds that use Treasuries in complex leveraged trades, private equity firms that need to park their cash, etc.

Holdings of these US entities surged by $332 in Q4 and by $1.58 trillion in the 12-month period to a record $8.65 trillion (blue line, left scale), for a share of the Incredibly Spiking US National Debt of 31.2% (red line, right scale), making them the largest holder of that monstrous mountain of debt: 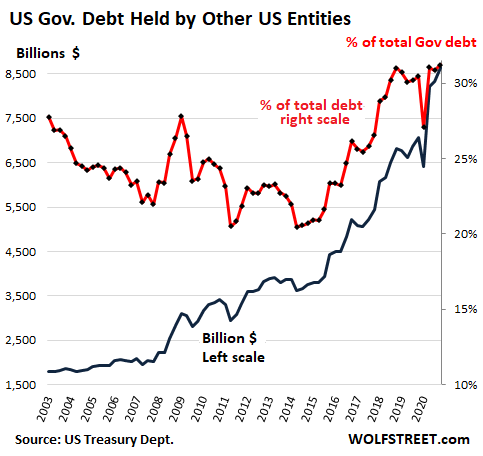 The Monstrous Mountain of Debt by Segments

All these holders of the monstrous US Treasury debt, combined into one mountain, and color-coded for your amusement by category of holder as of December 31: 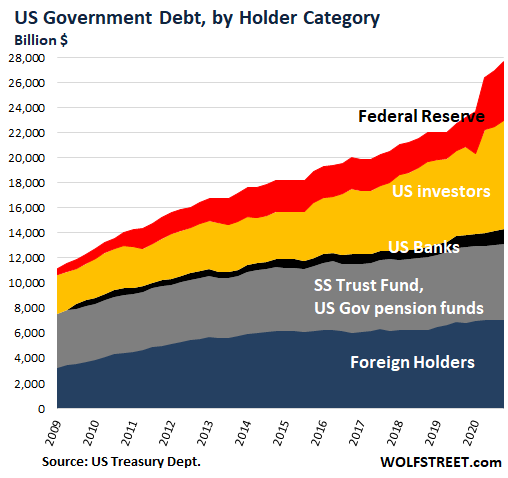