22 Feb 2021 – In an online post last week, Stella Moris, the partner of Julian Assange and mother of his two young children, outlined the ongoing denial of the WikiLeaks founder’s fundamental legal and democratic rights, even after a British Magistrates’ Court ruled early last month against his extradition to the United States.

Moris provided a succinct summary of the issues of democratic principle at stake, in the US attempt to prosecute Assange for lawful publishing activities that exposed war crimes, and updated his supporters on the current stage of the legal campaign to secure his freedom. 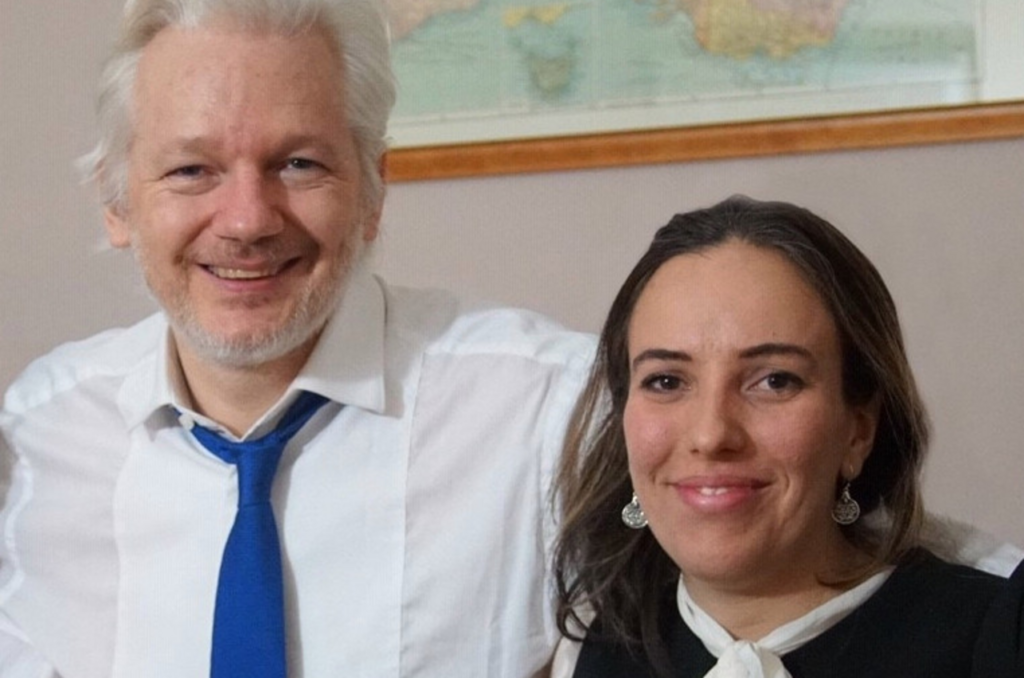 Assange and Moris in the Ecuadorian embassy.
(Credit: WikiLeaks)

Assange’s dispatch to the US had been blocked on the grounds that it would be “oppressive.” His health issues, including serious depression, and the brutal character of the US prison system, meant there would be a great risk of Assange taking his own life if he were extradited.

The US immediately responded, in the final days of the administration of President Donald Trump, by formally signalling an appeal. Trump’s Democratic Party successor, President Joe Biden, in his first weeks in office, rejected calls by civil liberties and press freedom organisations for the US Department of Justice to drop its pursuit of Assange, demonstrating the bipartisan character of the persecution.

The High Court will decide after March 29 whether prosecutors, acting on behalf of the US state, will be permitted to proceed with their appeal. Moris stated that the next stage for the defence was to submit a response to the US grounds of appeal.

She then reviewed the anti-democratic implications of Judge Vanessa Baraitser’s January 4 ruling. It had denied Assange’s extradition on health grounds, but “did not side with him on the wider public interest arguments.”

Baraitser had upheld virtually all of the prosecution’s substantive arguments, effectively green-lighting future attempts by governments to prosecute journalists and publishers for exposing material that they deem to be “classified” and of “national security” significance, regardless of the public interest of what is exposed.

Baraitser rejected the defence’s insistence that the decade-long US pursuit of Assange, culminating in the laying of Espionage Act charges, was politically-motivated, and that a successful prosecution would constitute an attack on press freedom.

“Julian’s extradition team is considering all these issues, and whether they can be cross-appealed,” she stated.

There are undoubtedly complex issues of legal strategy and tactics that Assange’s expert defence team is weighing. The fact that the team is considering an appeal of the anti-democratic elements of Baraitser’s ruling underscores the determination of Assange and WikiLeaks to fight the broader assault on press freedom, and further shines the spotlight on the wide-reaching implications of the US attempt to extradite and prosecute him.

The politically-calculated character of Baraitser’s verdict was demonstrated, not only by her acceptance of the dangerous precedent that the US Department of Justice is seeking to establish, but also her refusal to grant Assange bail, just two days after extradition was blocked.

Baratiser rejected a bail application, siding with prosecutors’ claims that Assange posed an unacceptable “flight risk,” even though travel routes have been severely impacted by the COVID-19 pandemic. The extraordinary verdict means that Assange is being held in the maximum-security Belmarsh Prison, solely on the grounds of an extradition request that has been rejected by the first court in which it was heard.

“Julian—who is an unconvicted innocent man—remains on remand in the high security Belmarsh Prison where he has been for over 500 days,” Moris wrote. “He should be home with his kids, but he was refused bail.”

As the WSWS has repeatedly noted, his ongoing detention endangers Assange with possible COVID-19 infection, and even death, as the virus has circulated at undisclosed levels within Belmarsh.

“There are many terrible things about Belmarsh, not least how cold it has been over the last couple of weeks, and that he is isolated in a cell practically all day long,” Moris commented.

She added, “the most pressing problem for Julian is that conditions in detention continue to obstruct his ability to prepare his legal case, a case on which his life depends. He is denied proper access to his lawyers—his legal team is unable to do in-person visits because of Covid, and there are months of waiting lists for video conferencing.

“There are delays in legal papers reaching him, and the laptop issued by UK authorities for the court case is read-only, it has no text editing programs, and the keys are glued down to prevent him from typing. This makes it all but impossible for him to provide adequate feedback to his team, with regards to the materials required for the appeal.”

The update is the latest proof that in addition to seeking to physically destroy Assange, by indefinitely detaining him without charge, the British authorities are doing everything they can to hamper his defence and to aid the US attempts to secure the WikiLeaks founder’s extradition.

This is an international operation involving the Conservative government and the Labour opposition in Britain, the Democratic and Republican parties in the US as well as the Australian government and political establishment as a whole, which have facilitated the persecution of Assange by refusing to uphold his rights as an Australian citizen.

Moris’ comments have been reported by only a handful of independent media outlets. As has occurred so often over the past decade, the corporate press is playing a linchpin role in the assault on Assange, by blocking any broader discussion, or even knowledge, of his dire situation.

Meanwhile, the major publications in the US, Britain and Australia have been full of column space decrying alleged attacks on democratic rights in countries locked in conflict with the major imperialist powers, especially China and Russia. The official press is deeply concerned about the plight of dissidents in those countries being targeted by the US and its allies, but is indifferent to the fate of a journalist being subjected to an unprecedented legal and political attack in the heart of London.

This again underscores the fact that the fight against Assange’s extradition, and for his immediate freedom, must be connected to the broader struggle against the turn by governments and the ruling elites to authoritarian and dictatorial methods, amid a major crisis of world capitalism, triggered by the pandemic.