This new political battle does not break down along left v. right lines. This is an information war waged by corporate media to silence any competition or dissent. 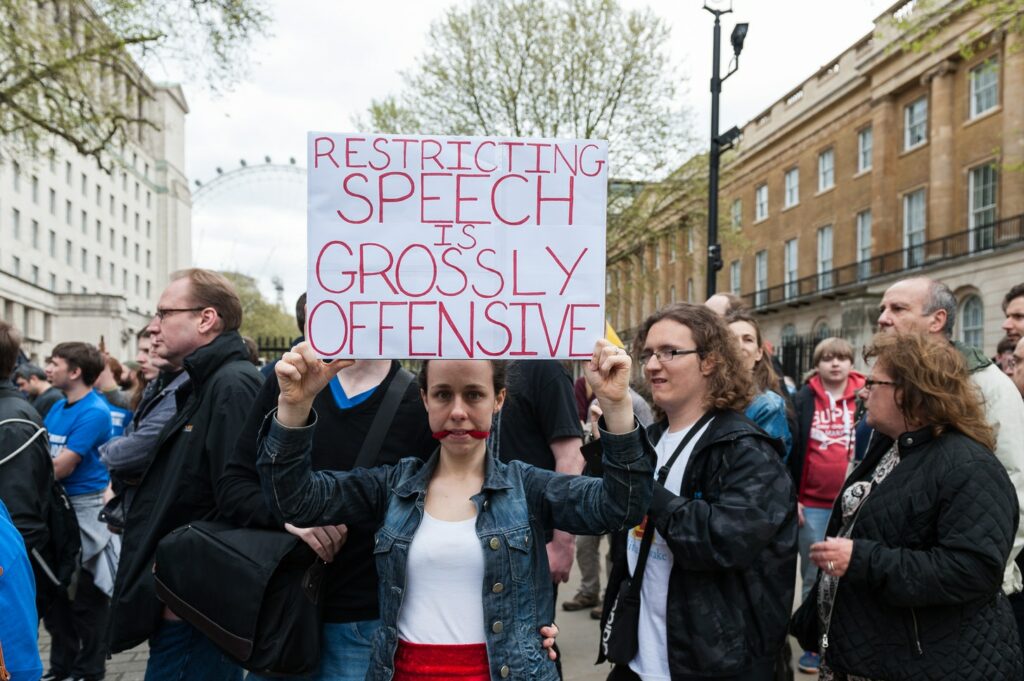 Supporters of Mark Meechan aka Count Dankula gather in central London to protest against his conviction under the Communications Act in March 2018.
(Wiktor Szymanowicz / Barcroft Media via Getty Images)

11 Mar 2021 – On Wednesday [10 Mar], I wrote about how corporate journalists, realizing that the public’s increasing contempt for what they do is causing people to turn away in droves, are desperately inventing new tactics to maintain their stranglehold over the dissemination of information and generate captive audiences. That is why journalists have bizarrely transformed from their traditional role as leading free expression defenders into the the most vocal censorship advocates, using their platforms to demand that tech monopolies ban and silence others.

That same motive of self-preservation is driving them to equate any criticisms of their work with “harassment,” “abuse” and “violence” — so that it is not just culturally stigmatized but a banning offense, perhaps even literally criminal, to critique their journalism on the ground that any criticism of them places them “in danger.” Under this rubric they want to construct, they can malign anyone they want, ruin people’s reputations, and unite to generate hatred against their chosen targets, but nobody can even criticize them.

Any independent platform or venue that empowers other journalists or just ordinary citizens to do reporting or provide commentary outside of their repressive constraints is viewed by them as threats to be censored and destroyed. Every platform that enables any questioning of their pieties or any irreverent critiques of mainstream journalism — social media sites, YouTube, Patreon, Joe Rogan’s Spotify program — has already been systematically targeted by corporate journalists with censorship demands, often successfully.

Back in November, the media critic Stephen Miller warned: “It’s only a matter of time before the media tech hall monitors turn their attention to Substack.” And ever since, in every interview I have given about the success of Substack and every time I have written about journalist-led censorship campaigns, I have echoed that warning that they would soon turn their united guns on this platform. Miller’s prediction was prompted by a Columbia Journalism Review article entitled “The Substackerati” which claimed that Substack was structurally unfair because “most” of “the most successful people on Substack” are “white and male; several are conservative” and “have already been well-served by existing media power structures.”

All of that was false. The most-read and highest-earning writer on Substack is Heather Cox Richardson, a previously obscure Boston College History Professor who built her own massive readership without ever working at a corporate media outlet. And the writers that article identified in support of its claim — Matt Taibbi, Andrew Sullivan, Matt Yglesias and myself — do not remotely owe our large readerships to “existing media power structures.” The opposite is true, as The Washington Post’s Megan McCardle explained:

[These Substack writers] got so big by starting blogs that they could sell to traditional publications. They are not monetizing an audience they acquired through larger institutions, but reclaiming one they created themselves…. [O]bviously, one major characteristic of the successful one (wo)man show is the ability to swim against a crowd. Given that, it seems almost obvious that Substack would select people who are not in tune with the dominant views of the establishment media. And that the biggest audience numbers will come from folks who are not in tune with the establishment media….

That is precisely why they are so furious. They cannot stand the fact that journalists can break major stories and find an audience while maintaining an independent voice, critically questioning rather than obediently reciting the orthodoxies that bind them and, most of all, without playing their infantile in-group games and submitting to their hive-mind decrees. In fact, the more big stories you break while maintaining your independence from them, the more intense is the contempt they harbor for you: that explains, among other things, their willingness to watch Julian Assange (who has broken more major stories than all of them combined) be imprisoned for publishing documents.

That they are angry and upset is irrelevant. It only matters because these resentments and fears that they are losing their monopolistic power over public thought are translating into increasingly concerted and effective censorship campaigns.

As it turns out, we did not have to wait long for the initiation of the censorship campaign aimed at Substack. It has arrived. And amazingly, the trigger for it was my criticism of the work of a front-page New York Times reporter which, as I wrote yesterday, is — like all criticisms of journalists in Good Standing and Decent Liberal Society — being recast as “abuse” and “harassment” and “violence” in order to justify the banning and outlawing of that criticism.

A long-time tech reporter at BuzzFeed who was fired by that outlet in June for serial plagiarism, Ryan Broderick, wrote an article on Wednesday night warning that Substack is now dangerously providing a platform to a “cadre of writers” which, in addition to me, includes such societal menaces as “Bari Weiss, Andrew Sullivan, Jesse Singal, and, I’d argue, Slate Star Codex writer Scott Alexander Siskind.” He darkly notes: “There are more.” This group of writers, he says, is “focusing on culture war Twitter drama about being ‘canceled’ and trans people in bathrooms and woke college students.”

Broderick detailed how he had carefully reviewed a prior article of mine, one that examined the emergence of “tattletale culture” in the country’s largest corporate media outlets, to determine — like the good little diligent junior-high hall monitor that he is — whether it ran afoul of Substack’s terms of service rules against “doxing” and “harassment.”

That article of mine was devoted to a critique of the prevailing journalistic practices at the most powerful and influential media corporations on the planet: The New York Times, CNN, and NBC News. But to Broderick, whether that article should be banned on the grounds of harassment is a close call. While reluctantly conceding that I did not “dox” anyone, he called the article “a vicious screed” and said that the danger signs from my critiques of corporate journalists are clear: “online harassment is a constantly evolving process of boundary testing.” He lamented that Substack’s terms of service are too permissive (“One thing that worried me was how simplistic their definition of harassment was”) and insisted that Substack is soon going to have to step in and put a stop to this:

Right now most of the abuse being carried out by this group is confined to Twitter, but it stands to reason that it will eventually spill over to Substack. And dealing with people like Greenwald is going to be much harder to moderate than your average troll.

[Please permit me to pause here just a moment and marvel at the towering irony that a journalist who spent years at BuzzFeed doing absolutely nothing of value and then got fired for serial plagiarism (again: he got fired for ethical breaches by BuzzFeed) is now, with a straight face, holding himself out as the Guardian and Defender of Real Journalism. Even more amazingly, he believes he is fulfilling that role by demanding that I — not a journalist but just a “troll” who is the enemy of Real Journalism despite having more impactful scoops and journalism awards and, as I detailed yesterday, resulting persecution campaigns from governments than all of these petulant fragile babies combined — be silenced in the name of saving journalism and protecting real reporters like him and his friends from harassment].

In case Broderick’s article was not explicit enough in his demand that Substack start censoring me and others, he took to Twitter to promote his article, where he made that even clearer. He described his article this way: “I wrote about the attacks against @TaylorLorenz and the growing community of right-wing culture warriors and TERFs that are using Substack to network and organize.”

Glenn Greenwald is one of three co-founding editors of The Intercept. He is a journalist, constitutional lawyer, and author of four New York Times best-selling books on politics and law. His most recent book, “No Place to Hide,” is about the U.S. surveillance state and his experiences reporting on the Snowden documents around the world. Prior to co-founding The Intercept, Glenn’s column was featured in the Guardian and Salon. He was the debut winner, along with Amy Goodman, of the Park Center I.F. Stone Award for Independent Journalism in 2008, and also received the 2010 Online Journalism Award for his investigative work on the abusive detention conditions of Chelsea Manning. For his 2013 NSA reporting, he received the George Polk Award for National Security Reporting; the Gannett Foundation Award for investigative journalism and the Gannett Foundation Watchdog Journalism Award; the Esso Premio for Excellence in Investigative Reporting in Brazil (he was the first non-Brazilian to win), and the Electronic Frontier Foundation’s Pioneer Award. Along with Laura Poitras, Foreign Policy magazine named him one of the top 100 Global Thinkers for 2013. The NSA reporting he led for the Guardian was awarded the 2014 Pulitzer Prize for public service. Glenn is an animal fanatic & founder of HOPE Shelter.