23 Mar 2021 – Leaked photos from a migrant overflow facility in Texas, released Sunday [21 Mar] by US Representative Henry Cuellar (D-TX), have given the first glimpse of the crowded conditions for child migrants detained at the US-Mexico border. 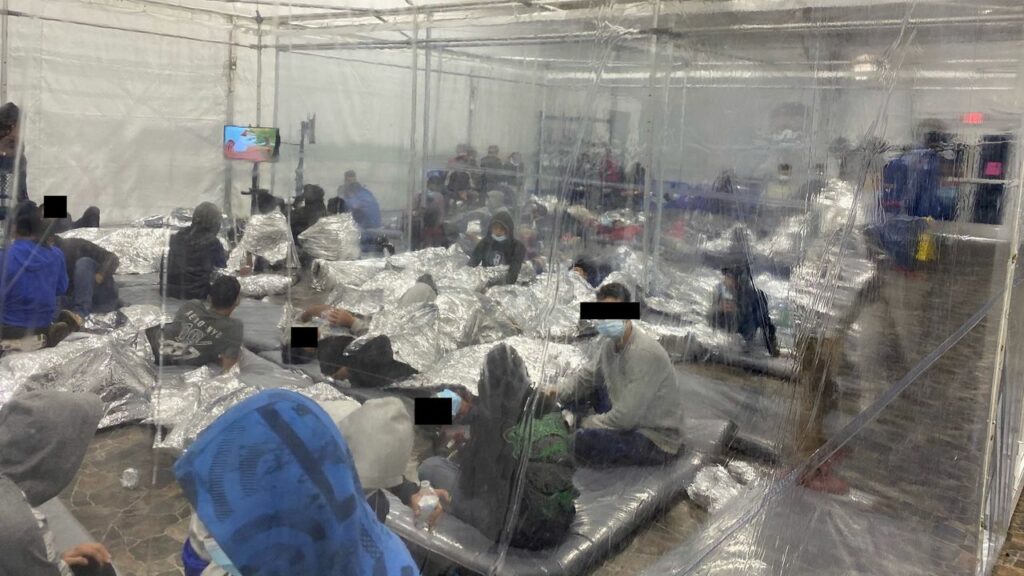 (Photos provided by the office of US representative Henry Cuellar, originally published by Axios)

In the images, children can be seen cramped in enclosed spaces, many laying on mats with mylar blankets. The pictures were published as the Biden administration continues to block access to US Border Patrol detention facilities housing children detained by immigration officers.

The conditions shown in the pictures resemble similar images taken of immigration facilities under the Obama and Trump administrations. In 2018, pictures of children sleeping on the floor in a fenced enclosure surfaced online. Trump’s cruel immigration policies were initially blamed, and then it was discovered that the photos were actually taken during Obama’s presidency.

The next year, leaked images showed migrant children sleeping on the ground and on rocks in McAllen, Texas.

Amid an increase in COVID-19 infections, the crowding seen in Monday’s images makes social distancing impossible. Dozens of migrants are confined together in small spaces, with only disposable masks to protect them from the virus. Many people attempting to cross the border have tested positive for COVID-19, meaning the Biden administration’s detention of migrants will only contribute to its spread.

According to Cuellar, the immigration facility held eight “pods,” each with a 260-person occupancy. Cuellar told the press that one pod held more than 400 unaccompanied male minors. The congressman did not actually visit the facility himself, and would not reveal how he came into possession of the photos.

The conditions at the facility are a political embarrassment for the Biden administration, which has sought to cover up the worsening conditions of refugee camps. Millions voted for Biden, expecting a reversal of Trump’s fascistic immigration policy. However, little has changed from the previous administration.

Although the Biden administration ended one particularly egregious practice, separating parents and children and detaining them in separate facilities, it is keeping families “united” by expelling them back across the border, denying their rights to file asylum claims once they reach US soil.

In response to political attacks from Republicans demanding even more cruel treatment of immigrants, Biden sent envoys to Mexico and Guatemala on Monday to ask officials to assist the US in blocking migrants from reaching the border.

Roberta Jacobson, former US ambassador to Mexico, will be joined by Juan Gonzalez, the National Security Council’s senior director for the Western Hemisphere, and Ricardo Zuniga, State Department special envoy for the Northern Triangle.

On Monday, White House press secretary Jen Psaki said the delegation would seek a “partnership” to manage migrant crossings. In other words, Biden would like Mexico, Guatemala, Honduras and El Salvador to do his dirty work for him.

The Mexican government has already increased its presence of law enforcement at its southern border, under pressure from the Trump Administration. Mexico has been engaged in its own deportations, which it euphemistically calls “assisted returns.” Immigrants in “migration stations” face abhorrent conditions and attacks from police.

Biden’s promises of reversing Trump’s asylum policies have proven to be lies, as his administration has continued to arrest, detain, and deport migrants in large numbers. More than 100,000 people were detained by immigration officials in February alone. This includes 9,460 unaccompanied minors, a more than 60 percent increase from January.

Government data indicates more than 11,000 unaccompanied children were taken into Border Patrol custody from February 28 to March 20. As of Sunday, there were 822 children held in jail-like Border Patrol facilities for over 10 days. The average time children have spent in custody is about 130 hours, exceeding the 72-hour legal limit.

Department of Homeland Security Secretary Alejandro Mayorkas adamantly stated the border was closed to migrants on ABC’s “This Week,” saying, “The message is quite clear, do not come. The border is closed, the border is secure.”

Mayorkas attempted to justify the detention of unaccompanied minors by saying the Biden administration was concerned for their safety. Although adults and families would be immediately expelled from the US, his administration would not deport minors “into the Mexican desert.”

Mayorkas blamed the current disaster at the border on the Trump Administration, which “dismantled the orderly, humane and efficient way of allowing children to make their claims under United States law in their own country.”

This means that Biden aims to return to the pre-Trump policies of Barack Obama, who earned the title “deporter-in-chief” because his administration—with Biden as vice president—deported more immigrants than any previous US government.

Biden has blocked tens of thousands of migrants from entering he US, citing health risks due to COVID-19. Despite the opposition of medical experts, 70 percent of the more than 100,000 people who attempted to cross the border in February were expelled under “Title 42,” a federal law that allows the government to refuse migrants’ rights to apply for asylum while remaining on US soil.

Migrants sent back to Mexico under Trump’s “Remain in Mexico” policy have been told they’ll be sent back to their home countries. Approximately 71,000 people sought asylum under the program, under which they were forced to wait in Mexico while their asylum cases were decided. The vast majority have been denied.

Additionally, Biden has utilized radio ads to tell migrants they are unwelcome. Psaki told reporters the Biden administration paid for 17,118 radio ads in Spanish, Portuguese and six indigenous languages to discourage migrants from Central America and Brazil. She said 589 digital ads have also been placed.

Those seeking to cross the US-Mexico border are fleeing poverty and violence imposed on Central America from more than a century of US intervention. Billions of dollars in goods and services cross the US-Mexico border daily and US corporations employ workers in sweatshops across Central America. But immigrant workers seeking better opportunities at great personal risk are turned away.

The migrant crisis at the border exposed the bankruptcy of capitalism and the nation-state system, and the urgent necessity for American workers to come to the defense of their class brothers and sisters from south of the border.