Weaponization of Aid Contributes to Death of Yemenis

People in Yemen are not just dying, they are being left to die. 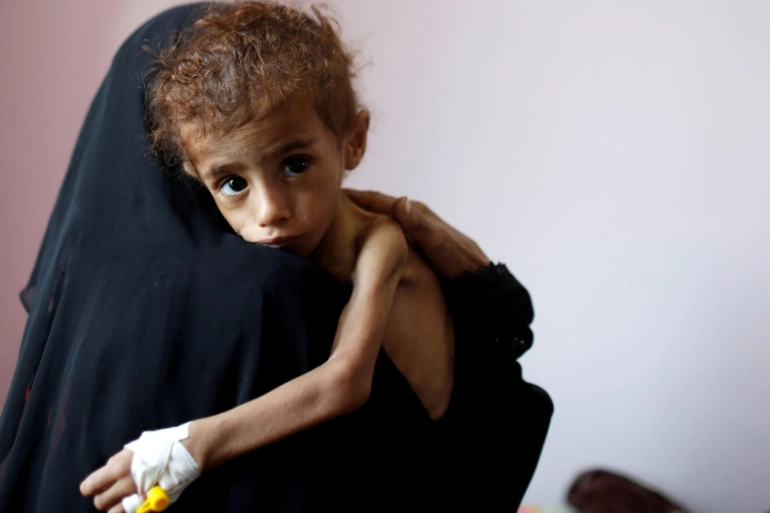 A woman holds a malnourished boy in a malnutrition treatment centre at the al-Sabeen hospital in Sanaa, Yemen October 6, 2018 [Khaled Abdullah/Reuters]

23 Mar 2021 – Six years into a devastating conflict, Yemen is at a tipping point and civilians are paying the price of war. More than 18,500 civilians have been killed or injured since March 2015 according to the Yemen Data Project, and at least 3.6 million people have been forced to flee their homes due to conflict. Horrifically, more than 80 percent of the population is in need of humanitarian assistance. As long as fighting continues and warring actors refuse to silence their guns, the humanitarian crisis in Yemen will persist.

Yemen and its health system are on the verge of collapse.

We have seen the health system shattering first-hand. Already, in 2018, we saw destroyed facilities, shortages of medicines and equipment, severe malnutrition in children, outbreaks of cholera and vaccine-preventable diseases. We visited Al-Sadaka public hospital in Aden and spoke to physicians like Dr Al-Aryshi, who headed the children’s department. She showed us the outdated incubator unit. Because of the shortage, there were two newborn babies instead of one in each incubator. We saw children hospitalised with severe acute malnutrition. Three years later, acute malnutrition threatens more than half of children under five in Yemen. We are witnessing an impending famine, coupled with economic collapse, the ongoing loss of livelihoods, and the diversion and weaponisation of humanitarian aid.

COVID-19 has also added new stress to the already fragile healthcare system. Since the conflict began, deaths in the medical community, an exodus of medical personnel, and disruptions in higher education have also resulted in a decline in skilled medical professionals in the country. There are no doctors in 18 percent of districts across the country. Nationally, there are only 10 healthcare workers for every 10,000 people, less than half of the WHO benchmark for basic health coverage.

The COVID-19 outbreak has also disproportionately harmed health workers. Our organisations, Project HOPE and Medglobal, alongside local Yemen health professionals documented the deaths of more than 100 health workers – epidemiologists, medical directors, midwives, and other critical medical professionals – in Yemen, reportedly from COVID-19, through August 2020. In this context, when one medical professional dies, the effect is exponential and extends to their entire community.

The humanitarian crisis in Yemen has been made worse by the lack of safe and unrestricted access for aid and health workers to reach populations in need wherever they might be. At the same time, funds for the life-saving humanitarian response are dwindling year by year. Earlier this month, the United Nations hosted a donor conference for Yemen. While the event raised $1.7bn in pledges, that was not even half of what is needed to avert famine and respond to the crisis.

UN Secretary-General Antonio Guterres reiterated that “cutting aid is a death sentence.” Civilians have borne the brunt of the funding crisis, which led to the halving of food assistance to 9 million people and the suspension of support for health services in several locations.

The recent announcement by the US administration that it would resume humanitarian assistance in all areas of Yemen is an important step. Humanitarian access to all areas of the country is critical to reaching communities who are suffering and providing assistance based on need. We are now hearing reports of health facilities closing because they are running out of fuel. Fuel is critical for hospitals to run and medical equipment to function, as well as for the transportation of food and assistance. It is critical that fuel is allowed into the country to continue to provide life-saving health care and avert the looming famine.

The recent escalation of fighting in the Marib governorate is especially concerning, putting thousands of people’s lives at risk. Marib is home to many internally displaced people (IDPs), with the recent violence displacing them once again. More than 100,000 IDPs in Marib are not able to access health care, and we have seen first-hand the lack of health infrastructure in this governorate. We have led medical responses here, training nurses and midwives in the critical Helping Babies Breathe technique to reduce neonatal mortality in an area where maternal health services are scarce. It is these vulnerable women, children, and their families who will pay the price if fighting in Marib continues.

As we see in Marib, humanitarian assistance is not the solution for Yemen. The solution is political. We implore all parties to immediately end hostilities, allow unhindered access for humanitarian organisations throughout Yemen, and respect international humanitarian and human rights law. It is critical that all countries put the full weight of their diplomatic efforts into ending the conflict, including through an immediate pause on supplying weapons to all parties to the conflict. Once the war ends, public health issues can be more effectively addressed.

The clock is ticking in Yemen. Yemenis are not just dying, they are left to die.

Rabih Torbay, the President and CEO of Project HOPE, is a humanitarian and crisis response leader who has designed and implemented relief, transition and global health programs in some of the world’s most challenging conditions. He has worked extensively responding to humanitarian crises including in Sierra Leone, Afghanistan, Sudan, Syria, Lebanon, and the United States.

Dr Zaher Sahloul is the President and Co-Founder of MedGlobal, a humanitarian INGO providing health care in disaster areas. He is also a critical care specialist and Associate Professor in Clinical Medicine at the University of Illinois in Chicago. Sahloul is a leading expert on the humanitarian crisis in his homeland Syria, as well as applying lessons learned to other emergency responses including Yemen, Gaza, Greece, the Rohingya refugee crisis in Bangladesh, Colombia, and more. Sahloul was awarded the Chicagoan of the Year Award in 2016 for his medical work in besieged Aleppo and the Gandhi Award for Peace in 2020 for his humanitarian work in Syria and at the global level.
Go to Original – aljazeera.com
Tags: Anglo America, Crimes against Humanity, Famine, Genocide, Israel, MENA, Saudi Arabia, State Crimes, State Terrorism, UAE, UK, USA, United Nations, War crimes, Warfare, Yemen