Yemen: World’s Worst Humanitarian Disaster Triggered by Deadly Weapons from US and UK

9 Mar 2021 – The United Nations has rightly described the deaths and devastation in war-ravaged Yemen as the “world’s worst humanitarian disaster”— caused mostly by widespread air attacks on civilians by a coalition led Saudi Arabia and the United Arab Emirates (UAE).

A woman in Aden, Yemen prepares food at a settlement for people who have fled their homes due to insecurity. Credit: UNOCHA/Giles Clarke

But rarely, if ever, has the world denounced the primary arms merchants, including the US and UK, for the more than 100,000 killings since 2015– despite accusations of “war crimes” by human rights organizations.

The killings are due mostly to air strikes on weddings, funerals, private homes, villages and schools. Additionally, over 130,000 have died resulting largely from war-related shortages of food and medical care.

Saudi Arabia, which had the dubious distinction of being the world’s largest arms importer during 2015–19, increased its imports by 130 percent, compared with the previous five-year period, and accounting for 12 percent of all global arms imports, according to the Stockholm International Peace Research Institute (SIPRI).

But the newly-inaugurated Biden administration has threatened to halt some of the US arms sales proposed by the former Trump administration which sustained a politically and militarily cozy relationship with the Saudis.

The sales on-hold include $478 million in precision-guided munitions to Saudi Arabia and $23 billion in arms sales to UAE, including 50 F-35 fighter planes and 18 Reaper drones.

The US weapons systems with the UAE forces include F-16 fighter planes, F-35 Stealth jet fighters, Blackhawk helicopters and Sidewinder and Maverick missiles while UK’s arms supplies include Typhoon and Tornado fighter bombers and cluster munitions. The UAE is also equipped with French-made Mirage-2000 jet fighters, perhaps upgraded to the Mirage 2000-9 version.

All of these weapons – and more –have been used to bomb civilians in Yemen in the six-year-old conflict there.

Dr. Stephen Zunes, Professor of Politics and International Studies at the University of San Francisco, and founding director of the program in Middle Eastern Studies, told IPS Biden’s decision to cut off direct support for Saudi Arabia’s war on Yemen was long-overdue.

The US Congress, he said, had attempted to cut off such assistance last year by passing a ban by a big bipartisan majority. Trump, however, declared a state of emergency overruling the legislative branch.

“Unfortunately, Biden has pledged to (continue) providing arms in order to support what he refers to as Saudi Arabia’s defense needs against alleged Iranian aggression, despite the fact that Saudi Arabia’s military budget is five times that of Iran and is therefore perfectly capable of defending itself,” he pointed out.

Biden also has pledged aid to protect the kingdom from attacks by Houthi rebels, who have occasionally lobbed rockets into Saudi Arabia, but only in retaliation of the massive Saudi attacks on Yemen.

In addition, “Biden has called for continued support for Saudi counter-terrorism operations, which is concerning given the monarchy’s tendency to depict even nonviolent opponents as terrorists”, said Dr Zunes, who is recognized as one of the country’s leading scholars of U.S. Middle East policy and is a senior policy analyst for Foreign Policy in Focus project of the Institute for Policy Studies.

Along with Biden’s refusal to place sanctions on Crown Prince Mohamed bin Salman (known as MBS) “despite acknowledging his key role in the murder of a prominent U.S.-backed journalist as well as his conciliatory phone conversation with King Salman last month, raises serious questions as to whether Biden is really interested in standing up to the Saudi regime,” he argued.

Credit: YPN, the United Nations Office for the Coordination of Humanitarian Affairs (OCHA)

Meanwhile, Human Rights Watch and 41 other organizations are calling on President Joe Biden to impose sanctions available under the Global Magnitsky Human Rights Accountability Act on officials at the highest levels of Saudi leadership, including MBS.

Dr Simon Adams, Executive Director of the Global Centre for the Responsibility to Protect, a human rights organization that works on preventing war crimes and other atrocities in the world, told IPS the massive humanitarian crisis in Yemen is not the result of an earthquake or some other natural disaster; it is entirely man-made.

“Starvation is the result of airstrikes and a merciless war that has completely destroyed people’s lives,” he added. The bottom line is that the United States should not be selling weapons to any state that has been responsible for atrocities in Yemen, he declared.
Time and again, he said, the UAE and Saudi Arabia have been responsible for war crimes.

“The US is an accessory to these crimes if it continues to supply the bombs, drones and fighter planes used to bomb Yemeni civilians,” said Dr Adams whose Global Centre for the Responsibility to Protect has conducted advocacy with the UN Security Council since the war in Yemen began, arguing that impunity for war crimes by all sides has created the world’s largest humanitarian crisis. 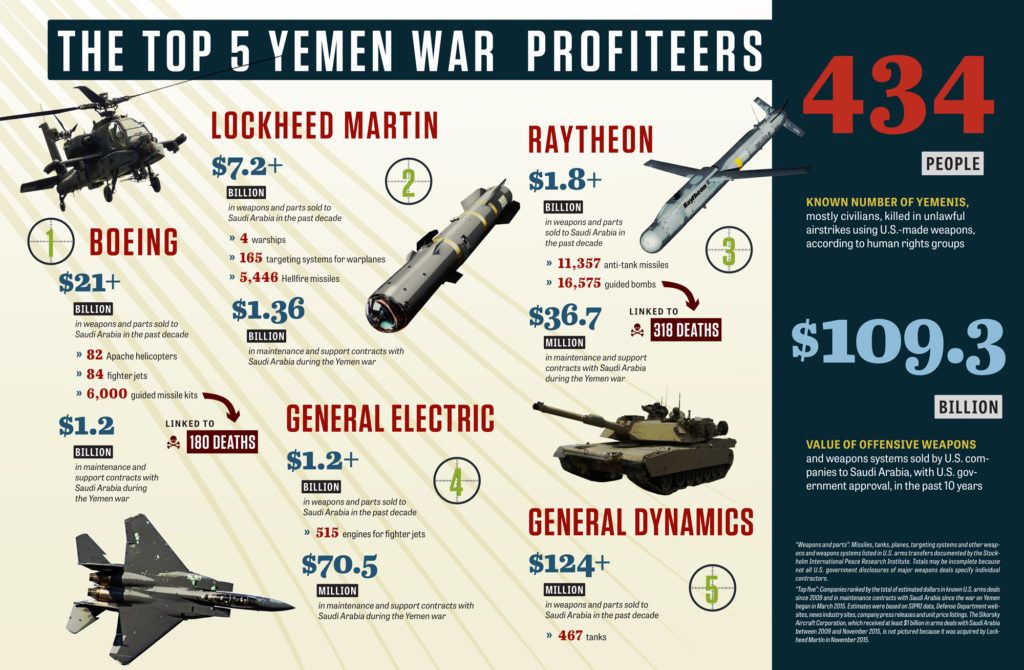 In an oped piece last month, Dr. Alon Ben-Meir, professor of international relations at the Center for Global Affairs at New York University, wrote “Countless Yemeni children are dying from starvation and disease while the world shamelessly watches in silence, as if this was just a horror story from a different time and a distant place, where a country is ravaged by a senseless, unwinnable war while a whole generation perishes in front our eyes”.

Those at the top who are fighting the war are destroying the very people they want to govern; they are the evil that flourishes on apathy and cannot endure without it, he added.

“What’s there left for them to rule? Twenty million Yemenis are famished, one million children are infected with cholera, and hundreds of thousands of little boys and girls are ravenous—dying, leaving no trace and no mark behind to tell the world they were ever here. And the poorest country on this planet earth lies yet in ruin and utter despair, said Dr Ben-Meir.

Over 5 million people are estimated to be one step away from famine; Only half of health facilities and two-thirds of schools are currently functioning; Water infrastructure is operating at less than 5 per cent efficiency.

The war has directly killed more than 100,000 people; Another 130,000 have died from “indirect causes” such as food shortages and health crises; An average of one child dies every 10 minutes from preventable causes.

Funding cuts mean that 9 million people have had their food assistance halved, and 15 major cities are on reduced water supplies. And NRC alone has had to cut food rations to 360,000 people.

At a March 1 UN High-Level Pledging Event for Yemen, Secretary-General Antonio Guterres said in his appeal: “We need $3.85 billion this year to support 16 million Yemenis on the brink of catastrophe”.

Pointing out that more than 20 million Yemenis need humanitarian assistance and protection, with women and children among the hardest hit, he said over 16 million people were expected to go hungry this year and nearly 50,000 Yemenis are already starving to death in famine-like conditions.

But following the conference, Guterres described the outcome as “disappointing” because the pledges, which amounted to $1.7 billion, were less than what was received for the humanitarian response plan last year, and a billion [dollars] less than what was pledged in 2019.