After previously defending AstraZeneca’s COVID vaccine, Canadian health officials on Monday  [29 Mar] suspended its use in people 55 and under, pending outcome of a detailed risk-benefit analysis. 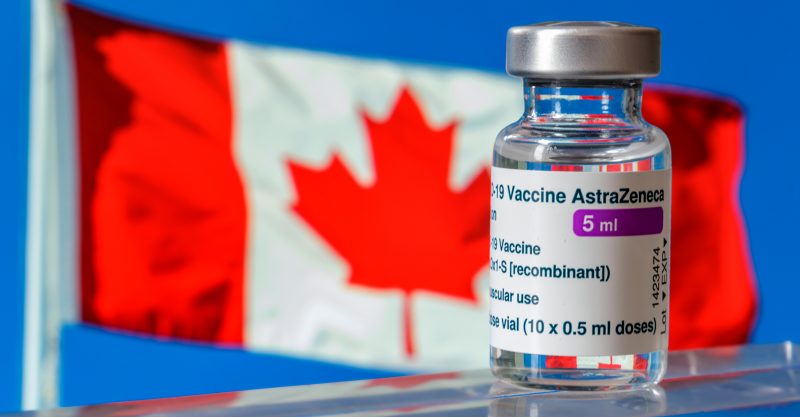 30 Mar 2021 – Canadian health officials yesterday suspended use of the Oxford-AstraZeneca COVID vaccine for people under age 55 following concerns the vaccine might be linked to rare blood clots, according to U.S. News & World Report.

“There is substantial uncertainty about the benefit of providing AstraZeneca COVID-19 vaccines to adults under 55 given the potential risks,” said Dr. Shelley Deeks, vice chair of the National Advisory Committee on Immunization.

According to ABC News, Deeks said the committee updated its recommendations amid new data from Europe suggesting the risk of blood clots is now potentially one in 100,000 — much higher than the one-in-1-million risk stated before.

Most of the patients in Europe who developed a rare blood clot after vaccination with AstraZeneca were women under age 55, and the fatality rate among those who developed clots is as high as 40%.

According to The Canadian Press, Health Canada demanded AstraZeneca conduct a detailed study on the risks and benefits of its COVID vaccine across multiple age groups. The Advisory committee recommended the shot be suspended for younger groups pending the outcome of that review.

Dr. Joss Reimer of Manitoba’s Vaccine Implementation Task Force said despite the European Medicine Agency’s (EMA) findings that there was no increased risk of blood clots overall related to AstraZeneca in Europe, a rare but very serious side effect has been seen primarily in young women in Europe between four and 20 days after getting the shot, reported ABC News.

“While we still believe the benefits for all ages outweigh the risks I’m not comfortable with probably. I want to see more data coming out of Europe so I know exactly what this risk-benefit analysis is,” Reimer said.

Prior to the product information update, on March 15, Prime Minister Justin Trudeau had offered reassurances to Canadians on the safety of AstraZeneca’s vaccine, even as numerous European countries paused the vaccine.

“Health Canada regulators are constantly analyzing all the available information about vaccines and have guaranteed those approved in Canada are safe for use,” Trudeau told reporters. “Health Canada and our experts and scientists have spent an awful lot of time making sure every vaccine approved in Canada is both safe and effective. Therefore, the very best vaccine for you to take is the first one that is offered to you.”

By March 16, more than 20 countries had suspended use of AstraZeneca’s COVID vaccine over concerns the vaccine was triggering rare blood clot disorders, some resulting in death, in healthy people who received the vaccine.

On March 18, EU regulators determined the Oxford-AstraZeneca vaccine “may be associated with very rare cases of blood clots, ”but the vaccine is “safe and effective” and recommended that countries continue to use it. Canada said the vaccine was safe but was adding a warning to the label about rare blood clots, reported Reuters.

Following that ruling, Health Canada said the benefits of the AstraZeneca vaccine outweighed the risk of blood clots, that it was safe and effective per the EMA and Medicines and Healthcare products Regulatory Agency, and encouraged Canadians to get immunized with any of the COVID vaccines authorized in Canada.

At the time, there had been only one report (as of March 18) in Canada of a stroke occurring in an individual following vaccination with COVISHIELD (the version of the AstraZeneca vaccine currently being distributed in Canada), health officials stood by the vaccine. That reported case was assessed by regulators and determined not to be related to the vaccine. However, only those 60 and above — the non-risk age group for rare blood clots— had received an AstraZeneca vaccine in the country’s most populous province of Ontario.

Although many European countries resumed using the AstraZeneca vaccine, Norway has not lifted its restrictions on the vaccine’s use after two independent research teams in Norway and Germany identified antibodies associated with the immune response that caused the type of blood clots experienced by some people who received the vaccine.

And today, as The Defender reported, Germany hit pause on the AstraZeneca vaccine for people under 60 following reports in that country of 31 blood clots and nine deaths in people who got the vaccine.

Denmark announced Thursday it was extending its suspension of AstraZeneca’s vaccine for another three weeks, while Finland and Sweden have cleared the vaccine for use in those over 65, but maintain suspension for all other age groups. France has authorized AstraZeneca only for those over age 55.

The AstraZeneca shot has been authorized in more than 70 countries and is the pillar of a Bill Gates’ United Nations-backed project known as COVAX which aims to get COVID vaccines to poorer countries.

According to The Washington Post, the vaccine’s rollout has been troubled by inconsistent study reports about its effectiveness, and more recently the scare about clots that had many countries temporarily pause inoculations.

“This vaccine has had all the ups and downs. It looks like a rollercoaster,” said Dr Caroline Quach-Thanh, chair of the National Advisory Committee on Immunization, when asked if the latest news will lead to further vaccine hesitancy in Canada.

Just last week AstraZeneca was accused by U.S. health agencies and federal scientists of misrepresenting efficacy data of its American clinical trial and failing to identify safety concerns related to the vaccine.

Although AstraZeneca’s COVID vaccine is one of the approved vaccines authorized for use in Canada, it has not yet received Emergency Use Authorization (EUA) in the U.S. The company plans to apply for EUA in the upcoming weeks. If approved, AstraZeneca would become the fourth available vaccine in the U.S., joining Moderna, Pfizer and Johnson & Johnson.