On that terrible day—May 25, 2020—while Chauvin knelt on Floyd’s neck, and two rookie officers pinned down Floyd’s legs, several onlookers became concerned. Floyd was handcuffed and face-down on the ground. They heard him calling for help, groaning in agony, and saying, over and over, “Please, I can’t breathe!”

A man named Donald Williams tried to shame Chauvin, calling him a “bum” and, sarcastically, a “tough guy” and a “real man.” Realizing the situation had become critical, Williams shifted to pleading, saying “He ain’t resisting” and “You’re stopping his breathing, man” and “You can get him off the ground” and “He’s human.”

“Let him breathe, at least,” another man begged.

Chauvin pressed his knee deeper into Floyd’s neck, as if to show that he wouldn’t tolerate any criticism, as if to say, “See what I can do.” At least four witnesses noticed this spiteful action, including Williams, who said to Chauvin, “That’s bogus” and “That’s some bum-ass shit” and “You’re enjoying that shit.” 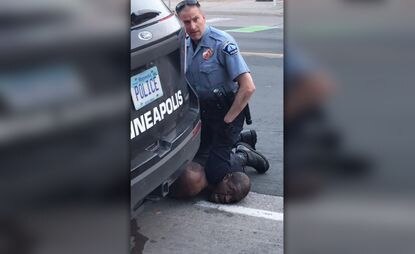 Chauvin knelt on Floyd’s neck for 9 minutes, killing him on the spot. Pay attention to his attitude. NY Daily News 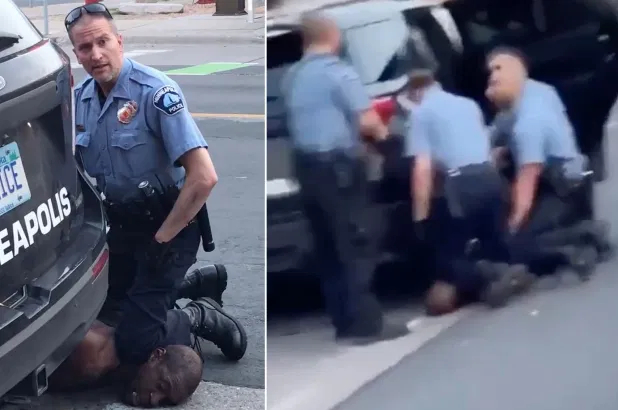 When any of the dozen onlookers stepped onto the street toward Chauvin, a fourth officer, Tou Thao, reached for his mace can and ordered them back onto the sidewalk.

When Floyd ceased crying out, the bystanders became even more alarmed. None of them knew the man—this was profound (and quite normal) human empathy for a stranger in peril. Darnella Frazier, the teenager who recorded the incident on her phone, asked, “How long y’all got to hold him down?” She and several others cried, “Get off him!”

The shouts and pleas and camera phones didn’t work. Thao was only concerned with “crowd control.” Chauvin was intractable, hands in pockets, face emotionless, answering to nobody. He pressed his knee into his victim’s neck, restricting blood and oxygen flow, for almost ten minutes. He only let up after a paramedics arrived to take away the corpse of George Floyd.

Questioned by prosecutors, Williams, Hansen, Frazier, and another teenager, Alyssa Funari, all tearfully said they wanted to do more but felt threatened by Chauvin and Thao.

“I was controlled on the curb,” Williams testified. “I did as much as I can.”

Hansen recalled that she felt “totally distressed” and was “desperate to help.”

“They wouldn’t even let us get close,” Frazier said. “They were quick to pull out mace. And we all backed back.” She was left with regret and guilt. “It has been nights I stayed up apologizing and apologizing to George Floyd for not doing more and not physically interacting and not saving his life.”

Funari recalled feeling like she was “failing.” “Technically I could have did something,” she testified, “but I couldn’t really do anything physically what I wanted to because the highest power was there.” By “highest power,” she meant police authority.

What more could they have done?

Third party nonviolent interposition means placing your body between parties in conflict to deter them from harming each other. A nonviolent intervenor must be willing to suffer harm yet unwilling to cause harm to anyone else. This requires great compassion, which literally means “to suffer with.” It also requires physical courage.

Donald Williams has great physical courage. He works as a bouncer and competes in mixed martial arts. As one of the first observers on the scene, Williams might have spun past Thao and rolled himself onto the ground next to Floyd. “I know you are angry, officer,” he might have offered. “Put your knee on my neck instead.”

Genevieve Hansen has great physical courage and professional confidence. As a firefighter, she enters burning buildings. Arriving from across the street, she calmly walked up behind Chauvin and Thao without them noticing. Right then, she had a chance to lie down alongside Floyd, check his pulse, maybe slide her body under Chauvin’s thigh. “I’ve got him,” she might have calmly told Chauvin, “you can let up now.”

Such nonviolent actions by Williams and/or Hansen might have inspired the three teenage girls—who wanted to intervene but felt constrained—to join them on the ground next to Floyd.

What would such compassion have accomplished? How can nonviolent interposition reduce violence?

First, the parties in conflict may see the intervenor as innocent, not the enemy, not deserving harm. They might halt their violent actions simply because the intervening party is in the way.

Third, nonviolent intervention can bring calming energy to a hostile situation. A person who emanates a loving, fearless presence can reduce the fear dynamic in ways which cannot be measured. Such an intervenor has a certain moral authority and integrative power, and others are likely to follow her lead.

But a display of compassion might have influenced the two officers on Floyd’s legs. An energy shift, from fear to love—perhaps Hansen placing a gentle hand on Chauvin’s shoulder and speaking quietly—might have been enough to roust him from his aggressive-defensive trance, to give his ego a way out.

If nothing else, the combination of nonviolent obstruction, empathy, and calm fearlessness would have confused and distracted Chauvin and Thao. The inexperienced officers might have felt empowered to question Chauvin’s instructions. In adjusting to the new dynamics, Chauvin might have stood up, giving Floyd a chance to live.

There’s no guarantee that third party nonviolent interposition would have saved Floyd’s life. But the empathy and desire were there—why didn’t anyone try?

The onlookers were afraid to challenge the armed, aggressive men wearing uniforms of state authority. There are legal penalties for interfering with police activity, and Williams was aware of the added danger for him—a male with dark skin. In fact, the onlookers at times restrained each other, not wanting anyone else to get hurt.

But these caring people are not to be blamed for inaction. They didn’t know what to do or how to do it.

This is speculation but a safe bet: the onlookers didn’t have nonviolent training. They hadn’t studied the history and science of nonviolence. They hadn’t engaged in nonviolent role-playing. Most important, they hadn’t done the meditative and contemplative work necessary to cultivate inner calm, heighten empathy for all, and decrease fear. (Readers of the Bible, or Gandhi, will recall that “Perfect love casts out fear.”)

If the hypothetical interventions posited above seem fanciful or ridiculous, you might study the Birmingham Children’s March. In 1963, after brief nonviolent training, thousands of Alabama schoolchildren stood up to police dogs and firehoses without striking back or fleeing. The children celebrated in jail; the racist police and firemen went home shaken because, as one officer said of the children, “The fear was gone.”

When nonviolence classes are standard in our K-12 schools—not just in specialized programs in prohibitively expensive colleges and universities—the USA will become a much safer and more humane place to live. More people will understand the message of Christian nonviolent civil rights leader John Lewis:

“Never, ever be afraid to make some noise and get in good trouble, necessary trouble.”

Anticopyright: Editorials and articles originated on TMS may be freely reprinted, disseminated, translated and used as background material, provided an acknowledgement and link to the source, TMS: Nonviolent Intervention and George Floyd, is included. Thank you.

One Response to “Nonviolent Intervention and George Floyd”