19 million Brazilians have gone hungry during the pandemic, new study finds, as food insecurity is also on the rise. 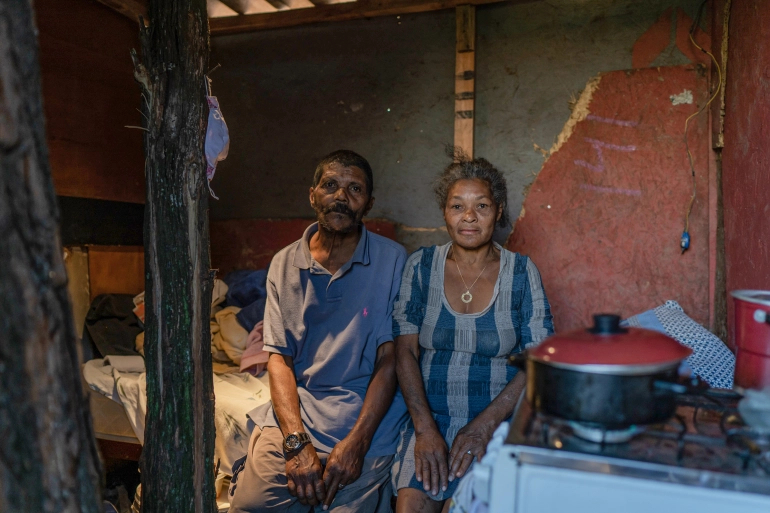 11 Apr 2021 – Ana Maria Nogueira adds one bacon-flavoured seasoning cube to the pot of rice simmering on the stove.

In the wooden shack that she and her husband, Eraldo, who is disabled, call home in Jardim Keralux, a poor neighbourhood in São Paulo’s sprawling eastern zone, the coronavirus that has killed more than 351,000 Brazilians seems like a faraway problem.

As Brazil’s COVID-19 crisis gets worse by the week with record-high death tolls, packed hospitals and climbing caseloads, another crisis is unfolding: hunger and food insecurity.

Ana and Eraldo are two of 19 million Brazilians to have gone hungry during the pandemic, according to a new study, while nearly 117 million – more than half the population – live with some level of food insecurity.

Experts point to high unemployment exacerbated by the coronavirus, cuts and reductions to social programmes and sharp price increases on basic food staples as some of the reasons behind the problem.

“It’s a tragedy that was totally foreseeable,” said Renato Maluf, president of the Brazilian Food Sovereignty and Nutritional Security Research Network (PENSSAN Network) that coordinated the study, conducted in December when Brazilians were still receiving emergency coronavirus cash payments from the government.

“Certainly things have gotten worse since then,” Maluf said.

Brazil was taken off of the United Nation’s world hunger map in 2014 after years of concerted effort to reduce hunger through successful social programmes and public policies.

The country’s then-President Luiz Inacio Lula da Silva, who now appears to be making a political comeback, famously said at his 2003 swearing-in ceremony that, “as long as there is a Brazilian brother or sister going hungry we will have reason to be ashamed”.

But in 2015, recession and political crisis struck. Austerity measures were introduced and unemployment soared. Three years later, before presidential elections that far-right populist firebrand Jair Bolsonaro would go on to win, extreme poverty and hunger were already raising alarms.

“The situation has been getting worse in recent years,” said Marcelo Neri, an economist at Brazil’s Getulio Vargas Foundation. “Definitely food insecurity has grown in 2021.”

Alexandre Padilha, a congressman with the left-wing Workers’ Party and a former health minister, said rising hunger and food insecurity was especially troubling during the COVID-19 pandemic as people pushed to find work or food were exposing themselves to the virus.

They could also be more vulnerable to contracting COVID-19 because their immune systems are weakened due to a lack of sustenance, Padilha said.

“It’s a tragic combination that reinforces the worst human tragedy in the history of Brazil,” he told Al Jazeera. “It compromises future generations for our country.”

Brazil is a major food exporter and São Paulo is South America’s wealthiest city. But for citizens living in the city’s impoverished periphery neighbourhoods like Jardim Keralux, eating three nutritious meals a day is increasingly an unaffordable luxury.

The situation is even worse in rural areas. “A poor person in the city can go out in the street and ask for food, a poor rural person can’t,” said Maluf at the PENSSAN Network.

Ana and Eraldo depend entirely on food donations to eat.

Ana collects and sells recyclable goods three times a week, but she is lucky if she makes $3.50 (BR$20) a day. Meanwhile, the 5kg bag of rice she currently has to feed herself and her husband – and that was a donation from a local Catholic church – costs $4.40 (BR$25) at the local supermarket.

Basic food prices have rocketed during the pandemic, which has had a disproportionate effect on poorer citizens. According to the Brazilian Institute of Geography and Statistics, in one year, the price of a kilogramme of rice shot up by nearly 70 percent, while black beans, potatoes, red meat, milk and soybean oil rose by 51, 47, 30, 20 and 87 percent, respectively.

The price of bottles of cooking gas commonly used in Brazil rose by 20 percent in the past year, the institute also reported.

Edilson Lino Bastos, vice-president of the Keralux Institute, a local neighbourhood association, said he is inundated with requests for food help. “The demand is always growing and there is never enough,” he said.

Bastos told Al Jazeera the association received 1,000 food packages from one of Brazil’s biggest insurance companies at the start of the pandemic. Now, those donations have dried up.

“Poorer Brazilians count on solidarity and the help of friends and family,” said Neri, the economist. “The problem is now people are tired… Resources are running out.”

Just a five-minute walk from Ana and Eraldo’s wooden shack in Jardim Keralux, Danila Oliveira, 27, sits on a plastic chair on an unpaved dirt road outside a friend’s home, breastfeeding her one-month-old baby.

Oliveira said without help and donations she and her three young children would go hungry. “I had to stop buying fruit for them because the price of rice and beans went up,” she said.

Giane Santos, 29, who lives in a concrete house next door to Ana and Eraldo, said that since losing her job in a local restaurant four months ago, she and her husband have been forced to skip some meals to keep her young son fed.

“We don’t eat red meat any more, we eat eggs instead,” she said.

Her husband also lost his job as a delivery driver and now goes out each day looking for odd jobs to pay the bills, which further exposes him to the coronavirus.

She said that the emergency payment of between $105 and $210 (BR$600 and BR$1,200) paid by Brazil’s government monthly to individuals and families last year, meant that the family did not have to go hungry.

According to data from the Getulio Vargas Foundation at the peak of the emergency aid, in August 2020 extreme poverty fell to its lowest level in history, affecting just 4.5 percent of Brazilians. But the payments were reduced gradually and then stopped at the end of the year.

Now, the projection for extreme poverty from January to March of this year is 12.8 percent.

Padilha, the congressman, said opposition members would push for a vote in the lower house this week to reinstate the aid to $105 (BR$600). But for Ana and Eraldo, even if that measure passes in Congress, their food troubles will continue.

They both lost all of their identification documents two weeks ago when their wooden shack collapsed during heavy rains and fell in the river, meaning they will struggle to access any benefits. They have since rebuilt the shack and sleep together on a single mattress.

The double mattress they had before is still floating in the river.

“I have nothing,” Ana said.