Why “Securing Democracy” Will Be Taught in Journalism Schools

Haters gonna hate, but Glenn Greenwald’s latest is a field guide to bringing home (another) scoop of a lifetime. 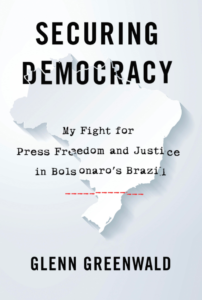 Review: Securing Democracy: My Fight for Press Freedom and Justice in Bolsonaro’s Brazil

24 Apr 2021 – My friend Glenn Greenwald has lately become a fixation of American propaganda, playing the role of the traitorous outcast, a cross of Emmanuel Goldstein and Satan. He’s inspired a slew of “Whither Greenwald?” profiles, often penned in the same plaintive “Why does he hate us?” tone pundits once reserved for the Islamic enemy. Some have been stunners. The New Yorker’s “Bane of Their Resistance” piece described Glenn as a gay Carrie, a scorned classmate pouring flamethrower-blasts of childhood trauma on the gentle defenders of Consensus.

On Twitter, where he has 1.6 million followers, it’s worse. Greenwald is coming off a streak of trending six times in six weeks, accused of everything from transphobia to grooming children. Few non-Trump figures on Twitter generate this level of crowdsourced fury; there are too many attack lines to count. One of the more popular is the idea that he’s “just an opinion writer” who doesn’t do any “real reporting”:

The through line for all these assholes, Stephens, Weiss, Yggy, Singal, and Greenwald is that they're fundamentally opinion writers and therefore suck at dealing with actual facts. (Greenwald had shit dumped in his lap based on his opinions, he report it out to get it.)

Securing Democracy: My Fight for Press Freedom and Justice in Brazil is Greenwald’s sixth book. It chronicles how he, his husband David Miranda, and a team of journalists and lawyers in and around The Intercept: Brasil broke the story of a widespread corruption campaign involving Brazilian prosecutors and a judge named Sergio Moro. Under the guise of an Eliot Ness-style cleanup called “Operation Car Wash,” the group railroaded hundreds of business figures and politicians into convictions, including the country’s popular former president, Luiz Inácio Lula da Silva.

The story came from a hacker-tipster who handed over a trove of explosive phone recordings. Once released, the recordings showed enough evidence of wrongdoing to kick-start an actual cleanup, with Lula released from prison less than a year after the hacker’s first call.

If folks like Kopplin want to keep score, that’s the second history-altering scoop of Greenwald’s career, two more than me, and two more than pretty much everyone else in this business, with one or two living exceptions (they know who they are!). The first time around, the “bane of their resistance” won the highest awards “they” give out, a Pulitzer Prize and an Oscar, for helping former NSA contractor Edward Snowden blow the whistle on a massive domestic surveillance program.

Times have changed, since that first rush of adulation. Even back then we saw a glimpse into the future shift in conventional wisdom, when Oscars host Neal Patrick Harris cracked that Snowden couldn’t attend the ceremony “for some treason”:

When reporters bring a big enough scoop home, they get the best prize of all: the chance to go back and write the story of the story. The best efforts in this area come off like great detective novels, often aided by the fact that the detective is also a professional storyteller.

Greenwald already traversed this genre skillfully with No Place to Hide, about Snowden, and Securing Democracy is the same kind of book, following the tale from one mysterious call on Mother’s Day, 2019, through publication, counterattack from Brazil’s beyond-Trumpian president Jair Bolsonaro, and the (for now) victorious end. The only challenge for American readers will be wrapping their heads around the Brazilian history primer in the first chapter, and keeping track of a long list of unfamiliar characters.

The story itself is not difficult to follow, however, and has clear parallels and connections to American politics. In fact, part of what makes Securing Democracy compelling — and Greenwald talks about this in our interview — is that Brazil’s “Operation Car Wash” affair shows how easily corruption scandals are manufactured in the digital age, as an alternative to traditional strong-arm tactics, to undermine democratically popular figures.

No Place To Hide featured one of the most elaborate source negotiations ever, tailor-made for movies, with exotic locales and covert communication schemes. There, Snowden seemed to know exactly what he was doing, while Greenwald was the one working through uncharted territory. Securing Democracy is a reversal.

“I assumed he would be like Snowden,” Greenwald says, “but I quickly realized that he wasn’t.” Unlike the methodical NSA contractor, who took every precaution, the Brazilian source insisted on talking by ordinary telephone from the start. Greenwald and Miranda, meanwhile, rely on the Snowden experience throughout to help plan their steps.

Securing Democracy will someday be taught in journalism schools because it’s a guidebook for how to carry an explosive story from the moment of receipt across a distant finish line. With respect to learned Twitter critics, there’s nothing easy about dealing with a story of this size. Even if a thing isn’t dug up in the old-school muckraker style, you still have to work the tip after you get it. With such a huge quantity of explosive information, just getting it into print requires an organizational effort on par with launching a business, and a marketing campaign that resembles launching a run for office.

Greenwald, his assistant Victor Pougy, and tech specialist Micah Lee created a system for transferring the files of the mysterious hacker out of Brazil and to a secure facility at the Intercept in New York. Once the calls were logged, they began the long process of going through the files — the archive was bigger than Snowden’s — to identify the most newsworthy material, zeroing in early on illicit chats between Moro and chief prosecutor Deltan Dallagnol that were the most damning proof of corruption. This was followed by the dicey project of picking the right lawyers, two men named Rafael Borges and Rafael Fagundes, and gradually bringing them in in a way that was safest for all concerned.

Greenwald and Miranda calculated, probably correctly, that if the story only came out in a new online venture founded by a gay foreigner, the story wouldn’t resonate with the Brazilian public. “As a result, I decided to use a strategy that we used during the Snowden reporting,” Greenwald wrote, “partnering with the most established media outlets in order to co-opt them into the reporting.”

They ended up partnering with Folha, which Glenn describes as “The New York Times of Brazil.” The paper not only reported the story but added a key early editorial saying, “Examination of the materials did not detect any evidence that it may have been altered.” Folha even offered some corroboration, showing how the archive contained messages from Folha reporters that checked out with the reporters’ own information. This was a major blow to the Bolsonaro regime, which early on tried to counterattack the archive as fake news, a “criminal” production printed by a shady foreign source.

This part of the story will be particularly useful for young writers who may be coming up in a business that lately is teaching different or opposite habits about what the proper relationship to an audience should be. As Greenwald puts it, a lot of modern American reporters think worrying about marketing and engagement are “beneath them as journalists.” In the business now it’s common to think it’s the audience’s job to believe what they’re told, not our job to convince. Unsurprisingly, as a result, polls continually show that the public is losing more and more faith in what the press publishes.

“They’ll tell you, ‘We are the ones who tell you what’s important, and you’re going to listen,’” is how Greenwald puts it. “And people are saying, ‘You know what? I don’t think what you’re saying is important and I’m not listening anymore.’”

As Securing Democracy and the Moro/Car Wash story demonstrate, when journalism is serious, when it’s not just farming eyeballs for dollars but actually trying to accomplish something, it has to think in terms of convincing everyone.

Lastly: for all the quasi-psychiatric analyses of Greenwald in places like The New Yorker or New York magazine, none of them seem to grasp that being willing to be the object of intense public loathing is now a pre-condition of most serious investigative reporting.

The costs of publishing something really damaging were always high — think of the way the business turned on Sy Hersh after he published the “Family Jewels” story about the CIA in 1975 — but in the digital age, full-scale character assassination is usually just a beginning. The Car Wash story prompted the spreading of a wild forgery purporting to show a secret bitcoin payment by Greenwald to a Russian hacker for the archive. This turned into Bolsonaro’s son Flavio publicly insisting that “Glenn Greenwald may have paid a Russian hacker to invade the cell phones of Brazilian authorities,” followed by accusations of pedophilic predation, followed by Bolsonaro himself speculating that Glenn might need to “spend some time in the slammer here in Brazil.”

America’s social media smear artists can be proud that they share many thematic ideas with the Brazilian fascist. Bolsonaro is too dense to know the word “grooming,” but he insinuated that Greenwald and Miranda were “tricksters” who “adopted boys” to abuse them. Greenwald and Miranda’s lesson: “It is impossible to anticipate all the threats that you will face when confronting powerful governments.”

Even after all this, Greenwald could regularly be seen arguing the story’s merits with every after-midnight three-follower egg on Twitter, which drives some people crazy but is probably a big part of why the hacker-source picked him in the first place. Most whistleblowers are in jams, thrust into impossible situations that have cost them jobs, friends, even their families sometimes. They need someone willing to join them on the hated list, and in the Internet age, the number of such people is small.

Unless you’re willing to deal with the worst this era can throw at the bearers of bad news — and it can be quite bad, as Snowden and especially Julian Assange can attest — you can’t really do this job anymore. Securing Democracy details what it takes, in the most extreme set of circumstances, in a compelling story that will be instructive for young reporters for generations.

Glenn Greenwald is one of three co-founding editors of  The Intercept. He is a journalist, constitutional lawyer, and author of four New York Times best-selling books on politics and law. His most recent book, “No Place to Hide,” is about the U.S. surveillance state and his experiences reporting on the Snowden documents around the world. Prior to co-founding The Intercept, Glenn’s column was featured in the Guardian and Salon. He was the debut winner, along with Amy Goodman, of the Park Center I.F. Stone Award for Independent Journalism in 2008, and also received the 2010 Online Journalism Award for his investigative work on the abusive detention conditions of Chelsea Manning. For his 2013 NSA reporting, he received the George Polk Award for National Security Reporting; the Gannett Foundation Award for investigative journalism and the Gannett Foundation Watchdog Journalism Award; the Esso Premio for Excellence in Investigative Reporting in Brazil (he was the first non-Brazilian to win), and the Electronic Frontier Foundation’s Pioneer Award. Along with Laura Poitras, Foreign Policy magazine named him one of the top 100 Global Thinkers for 2013. The NSA reporting he led for the Guardian was awarded the 2014 Pulitzer Prize for public service. Glenn is an animal fanatic & founder of HOPE Shelter.