An open letter on media standards in Canada, where some style guides ban the word “Palestine,” garnered over 2,000 signatures. 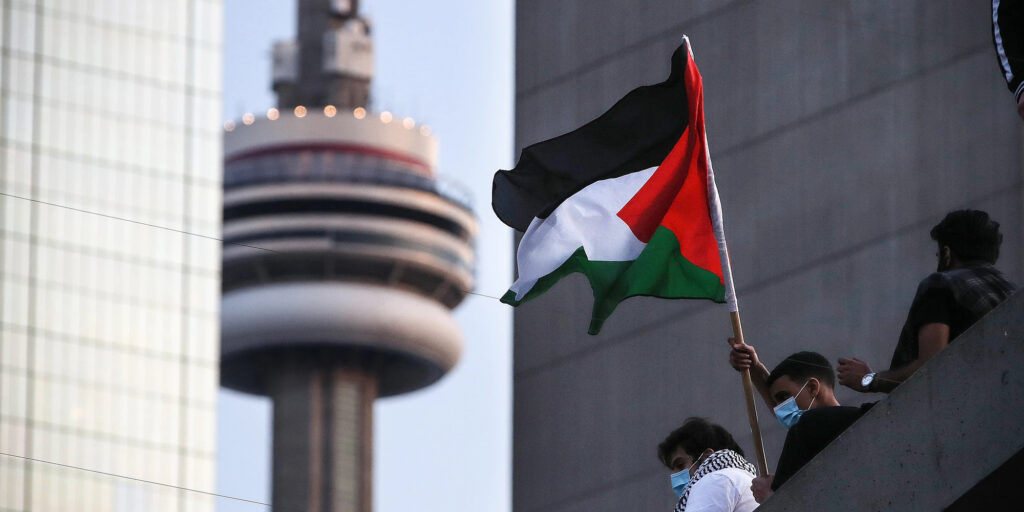 Thousands of demonstrators in solidarity with Palestine fill Nathan Phillips Square in Toronto on May 15, 2021.
Photo: Steve Russell/Toronto Star via Getty Images

20 May 2021 – While Israel launched strikes against Gaza last week after Palestinians protested planned evictions in Jerusalem, a group chat of journalists in Canada was lighting up with notifications.

They were frustrated with Canadian media coverage that painted the strikes without context and with a glaring absence of Palestinian voices. Some in the group, which included several Muslim journalists, shared frustrating experiences of advocating for nuanced coverage of international issues in their newsrooms. Some asked for advice on how to approach their editors about concerns with coverage, or lack thereof, of what was really going on in the region. So they drafted an open letter.

“‘The Middle East is complicated. We need to hear both sides. Everyone has a lot of emotions about this.’ [sic] These are just some of the excuses news editors have provided to Canadian journalists trying to cover the escalating violence against Palestinians,” the letter read. “The lack of nuanced Canadian media coverage of forced expulsions and indiscriminate airstrikes over the last three days, which have so far killed at least 137 Palestinians, including 36 children, has been disappointing.” At the time of publication, Israeli airstrikes have killed at least 230 Palestinians, including 65 children. The reported death toll among Israelis is just 12.

More than 2,000 people signed the letter, which was addressed broadly to Canadian newsrooms, including journalists in Canada and the U.S., writers, and students. Shortly after it was published on Friday, letter organizers started hearing from journalists who had been called into meetings with management at their respective newsrooms to discuss why they had signed. At least three people were completely taken off coverage of the region, according to two people familiar with the organizing efforts, who spoke with The Intercept on the condition of anonymity for fear of retaliation from employers.

The letter noted that some Canadian style guides “still ban the use of the word ‘Palestine’ in coverage,” and highlighted a May 6 Al-Jazeera column that pointed out that only two Canadian publications covered a Human Rights Watch report last month on decades of Israel’s crimes in Palestine.

Andray Domise, a contributing editor at Maclean’s magazine who signed the letter, told The Intercept that he had also heard from fellow signatories at other newsrooms who were asked to meet with their management. One reporter circulated a Google Doc on Twitter to share resources with reporters experiencing reprisal.

“The most nuanced coverage I was able to get was in social media. Which, as a journalist, should be embarrassing.”

Domise said he was already disturbed by media coverage of Israeli attacks on Palestinian protesters when the letter came to his attention. “I was listening to the radio, watching news conferences, and so forth,” he said. “The most nuanced coverage I was able to get was in social media. Which, as a journalist, should be embarrassing.”

“This is a holy site. But there was hardly any mention of that whatsoever. It was just described as a clash between worshippers and the IDF,” Domise said. “It looks something like starting the clock late.”

Like in many U.S. newsrooms, Canadian journalists are still dealing with a reckoning over coverage of marginalized communities sparked in part by worldwide protests last summer against police brutality. Numerous journalists were reprimanded for speaking up about those issues, Domise said, but little has actually changed. “So after having gone through all that, and knowing that nothing was done, why would anyone feel safe going to management and saying, ‘I don’t feel like the coverage on this particular issue is fair?’”

If the industry could have tough conversations about covering Black Lives Matter, it should be able to do the same for Palestine, the letter’s authors argued. “Our industry rallied to properly cover the Black Lives Matter protests after the brutal police killing of George Floyd, and the disproportionate impacts of the pandemic on marginalized communities at home and around the world,” their statement read. “We are learning to report on Indigenous experiences and issues in a nuanced way that recognizes the long historical impact of colonialism. Why shouldn’t Palestinians be afforded the same nuance?”

Numerous outlets reported over the weekend that Palestinian protesters in Toronto had assaulted an older Jewish man. What they did not note, Domise pointed out, was that the older man had been armed and had joined a group of people who had already instigated the fight. The group appeared to be attending a counterprotest by the Jewish Defense League, which the Southern Poverty Law Center designates as a hate group for promoting “a violent form of anti-Arab, Jewish nationalism.” The man told the Toronto Sun that he was not a JDL member.

“When we use the wrong language, it really minimizes and reduces the pain of people felt here.”

In response to the video, Toronto Mayor John Tory made a statement condemning antisemitism, as did Ontario Premier Doug Ford. CBC later reported on the full video, which showed that the man had been armed and instigated a fight.

“We’re asking for better coverage and better language to describe what’s happening,” in Israel and Palestine, one of the letter’s organizers told The Intercept. “Because in effect, when we use the wrong language, it really minimizes and reduces the pain of people felt here. And isolates millions of Canadians. If we’re misrepresenting it through our language, that is an indictment on our journalism.”

According to Domise, many people are still reluctant to speak out. “Folks are willing to go so far,” he said. “But they also have jobs and livelihoods.”

Update: May 20, 2021
After this article was published, The Intercept learned of two additional reports of signatories being taken off of Israel/Palestine coverage. The original reference, “At least one person was completely taken off coverage of the region,” has been updated to three.