The numerous incidents of killing entire families in Israeli bombings in Gaza – Parents and children, babies, grandparents, siblings – attest that these were not mistakes. The bombings follow a decision from higher up, backed by the approval of military jurists. 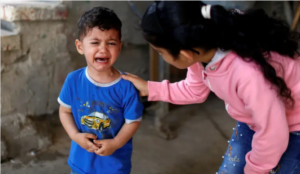 The brother of Palestinian boy Hussien Hamad cries during his funeral in the northern Gaza Strip, May 2021

Fifteen Palestinian nuclear and extended families lost at least three, and in general more, of their members, in the Israeli shelling of the Gaza Strip during the week from May 10 through to Monday afternoon. Parents and children, babies, grandparents, siblings and nephews and nieces died together when Israel bombed their homes, which collapsed over them. Insofar as is known, no advance warning was given so that they could evacuate the targeted houses.

On Saturday, a representative of the Palestinian Health Ministry brought listed the names of 12 families who were killed, each one at its home, each one in a single bombing. Since then, in one air raid before dawn on Sunday, which lasted 70 minutes and was directed at three houses on Al Wehda Street in the Rimal neighborhood of Gaza, three families numbering 38 people in total were killed. Some of the bodies were found on Sunday morning. Palestinian rescue forces only managed to find the rest of the bodies and pull them out from the rubble only on Sunday evening.

Wiping out entire families in Israeli bombings was one of the characteristics of the war in 2014. In the roughly 50 days of the war then, UN figures say that 142 Palestinian families were erased (742 people in total). The numerous incidents then and today attest that these were not mistakes: and that the bombing of a house while all its residents are in it follows a decision from higher up, backed by the examination and approval of military jurists.

An investigation by the human rights group B’Tselem that focused on some 70 of the families who were eradicated in 2014, provided three explanations for the numerous nuclear and extended families that were killed, all at once, in one Israeli bombing on the home of each such family. One explanation was that the Israeli army didn’t provide advance warning to the homeowners or to their tenants; or that the warning didn’t reach the correct address, at all or on time.

In any case, what stands out is the difference between the fate of the buildings that were bombed with their residents inside, and the “towers” – the high-rise buildings that were shelled as of the second day of this latest conflict, during the daytime or early evening.

Reportedly, the owners or the concierge in the towers got prior warning of an hour at most that they must evacuate, usually via phone call from the army or Shin Bet security service, then “warning missiles” fired by drones. These owners/concierges were supposed to warn the other residents in the short time remaining.

Not only high-rises were involved. On Thursday evening Omar Shurabji’s home west of Khan Yunis was shelled. A crater formed in the road and one room in the two־story building was destroyed. Two families, with seven people altogether, live in that building.

About 20 minutes before the explosion, the army called Khaled Shurabji and told him to tell his uncle Omar to leave the house, per a report by the Palestinian center for human rights. It is not known whether Omar was there, but the residents of the house all hastened to get out, so there were no casualties.

The funeral of two women and eight children of the Abu Hatab family in Gaza City, killed in an Israeli air strike, 15 May 2021

The Palestinian population registry, including that of Gaza, is in the hands of the Israeli Interior Ministry. It includes details such as names, ages, relatives and addresses.

As the Oslo Accords require, the Palestinian interior ministry, through the civil affairs ministry, transfers current information regularly to the Israeli side, especially concerning births and newborns: The registry data must receive Israeli approval, because without that, Palestinians cannot receive an identity card when the time comes, or in the case of minors – they can’t travel alone or with their parents through border crossings controlled by Israel.

It is clear, then, that the army knows the number and names of children, women and elderly who live in every residential building it bombs for any reason.

B’Tselem’s second explanation for why whole families were erased in 2014 is that the army’s definition of an attackable “military target” was very broad, and it included the homes of Hamas and Islamic Jihad people. These houses were described as operational infrastructure, or command and control infrastructure of the organization or terror infrastructure – even if all it had was a telephone, or just hosted a meeting.

The third explanation in the B’Tselem analysis from 2014 was that the army’s interpretation of “collateral damage” is very flexible and broad. The army claimed and claims that it acts according to the principle of “proportionality” between harm to uninvolved civilians and achieving the legitimate military goal, in other words, that in every case the “collateral damage” caused to Palestinians is measured and considered.

But once the “importance” of a Hamas member is considered high and its residence is defined as a legitimate target for bombing – the “allowable” collateral damage, in other words the number of uninvolved people killed, including children and babies – is very broad.

In the intensive bombing of three residential buildings on Al Wehda Street in Gaza, before dawn on Sunday, the Abu al Ouf, Al- Qolaq and Ashkontana families were killed. In real time, when the number of dead from one family is so great – it is hard to find and encourage a survivor to tell about each family member, and their last days.

So one must make do with their names and ages, as listed in the daily reports of the human rights organizations that collect the information and even note, when they know, if any family member belonged to any military organization. So far, it is not know whether and who among the residents of the Al Wehda buildings was considered such an important target, that “permitted” the obliteration of entire families.

The members of the abu al Ouf family who were killed are: The father Ayman, an internal medicine doctor in Shifa Hospital, and his two children: Tawfiq, 17, and Tala, 13. Another two female relatives were also killed – Reem, 41, and Rawan, 19. These five bodies were found shortly after the bombing. The bodies of another eight members of the Abu al Ouf family were removed from the ruins only in the evening, and they are: Subhiya, 73, Amin, 90, Tawfiq, 80, and his wife Majdiya, 82, and their relative Raja (married to a man from the Afranji family) and her three children: Mira, 12, Yazen, 13, and Mir, 9.

During the air raid on those buildings, Abir Ashkontana was also killed, 30, and her three children: Yahya, 5, Dana, 9, and Zin, 2. In the evening, the bodies of two more girls were found: Rula, 6, and Lana, 10. The Palestinian center’s report does not mention whether these two children are Abir’s daughters.

In the two neighboring buildings 19 members of the Al-Qolaq family were killed: Fuaz, 63 and his four children; Abd al Hamid, 23, Riham, 33, Bahaa, 49 and Sameh, 28, and his wife Iyat, 19. Their baby Qusay, six months old, was also killed. Another female member of the extended family, Amal Al-Qolaq, 42, was also killed and three of her children were killed: Taher, 23, Ahmad, 16, and Hana’a – 15. The brothers Mohammed Al-Qolaq, 42, and Izzat, 44, were also killed, and Izzat’s children: Ziad, 8, and three-year-old Adam. The women Doa’a Al-Qolaq, 39, and Sa’adia Al-Qolaq, 83, were also killed. In the evening, the bodies of Hala Al-Qolaq, 13, and her sister Yara, 10, were rescued from under the rubble. Palestinian center’s report does not mention who their parents were and whether they were also killed in the bombing.

This article is reproduced in its entirety.