Israel’s Attacks on Iran Are Not Working

The recent sabotage of the Iranian nuclear program has been spectacular—and strategically incoherent. 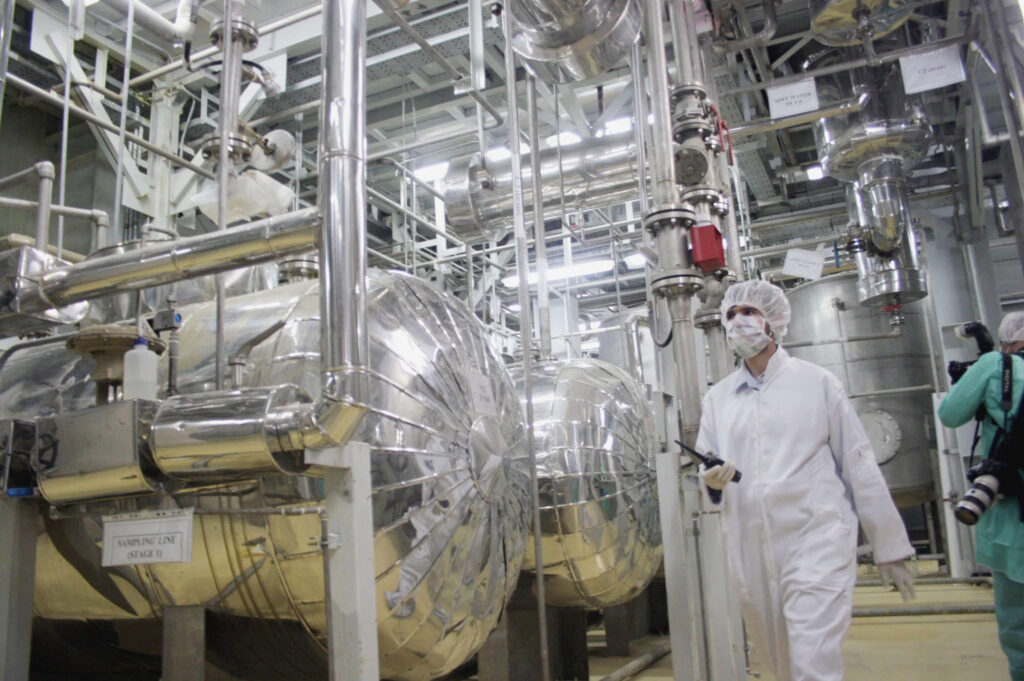 A worker walks inside of an uranium conversion facility March 30, 2005 just outside the city of Isfahan. Photo by Getty Images

27 Apr 2021 – Israel’s clandestine activities inside Iran have undoubtedly delayed the production of material Iran needs to make a bomb—and done so in spectacular fashion. Spies deployed months in advance to plant explosives inside an Iranian nuclear plant, a lethal cyberattack to corrupt computers that control centrifuges spinning uranium, and bullets showered on a leading nuclear scientist by remotely activating a machine gun—each of these incidents could be an episode in a gripping spy thriller.

Whether they were a success, however, is another question. These covert attacks, together with the debilitating sanctions imposed in recent years by Washington, have imposed setbacks on Iran but have not managed to convince the country to abandon its nuclear ambitions altogether. Instead, they have failed to change Iran’s approach to nuclear negotiations; if anything, they have strengthened its resolve to continue enriching uranium and thus achieve a “breakout” capacity for nuclear weapons. However impressive Israel’s attacks, they do not seem to be a sustainable strategy.

On April 11, an explosion caused a power blackout at the Natanz uranium enrichment site, one of Iran’s known nuclear facilities. Nuclear activities there were halted anywhere from a few weeks, said Iranian officials, to nine months, according to Israeli and U.S. intelligence officers quoted in news reports. This was the third attack, and the second in a year, at the Natanz nuclear station. Last July, a bomb exploded in a part of the premises that was producing a new set of centrifuges and delayed the program by months. Experts said both attacks could have only been carried out with physical infiltration.

The first attack on Natanz was launched more than a decade ago. A cyberweapon called Stuxnet disabled 1,000 centrifuges out of a total of 5,000. Centrifuges are cylindrical devices that spin at high speeds to isolate uranium-235, a radioactive isotope that generates power when enriched at less than 5 percent and becomes fuel for a nuclear bomb when enriched at 90 percent. This attack set back the program by 18 months to two years. Last November, Mohsen Fakhrizadeh, an Iranian nuclear scientist believed to be the brain behind Iran’s nuclear program, was shot dead near Tehran by an unmanned weapon. Seven other Iranian scientists and military officials linked to the nuclear program have been assassinated since 2007.

Israel has neither confirmed nor denied its involvement in any of these attacks. It has only admitted to stealing a trove of documents in 2018 that revealed how Fakhrizadeh was making elaborate plans to continue to develop a bomb in secret and hence furtively violate the terms of the nuclear deal signed in 2015 between Iran and world powers including the United States.

Israel’s clandestine activity has indeed slowed down the making of a bomb, and some Israeli intelligence officers believe it is the way forward to contain Iran’s nuclear program. They say the revival of the nuclear deal is not a deterrent against Iran’s nuclear ambitions but an unwarranted reward that would legitimize uranium enrichment and pave the path for a bomb-ready Iran. A lifting of sanctions, they contend, would allow Iran to sell its oil, fill its empty coffers, and use a chunk of cash to fund its various militias in the region. They say that instead of a deal, economic and military pressure must be used to coerce Iran to limit its influence in the region.

But many others disagree and argue that repeated Israeli sabotages have failed to convince Iran to give up on bomb readiness or to persuade the Biden administration to drive a harder bargain in the recently renewed talks.

Neither Iran nor the United States walked out of the meetings being held in Vienna. Instead, Iran used the recent attack to up uranium enrichment from 20 percent to 60 percent, further shortening the breakout time needed to build a bomb. Ali Vaez, the Iran project director at the International Crisis Group, said Israel’s covert attacks have only delayed and not permanently curtailed Iran’s nuclear activities. If continued, Vaez said, they would strengthen Iranian hard-liners who are pushing for developing a nuclear weapon. “Sabotage and sanctions have only led to the exponential growth of Iran’s nuclear program,” Vaez said. “Only diplomacy has rolled it back.”

Yossi Kuperwasser, a retired brigadier general in the Israeli army and head of research in military intelligence, defended clandestine activities as a part of a comprehensive effort that included economic pressures and a credible military option. “It’s a long-term policy, so there is no point in asking every day if the policy was successful,” Kuperwasser said. “At this time, the clandestine activities serve also to clarify that there are other ways to deal with the Iranian nuclear project than buying time in exchange for guaranteeing Iran a safe path to a big nuclear arsenal.”

Israel has long opposed the deal and not without legitimate concern. The deal, formally known as the Joint Comprehensive Plan of Action (JCPOA), barred Iran from enriching uranium at 90 percent—weapons grade—only until 2031 and did not ban the development of long-range ballistic missiles, which Iran will likely aim in Israel’s direction. Israelis insist that the deal is not a panacea to their conflict with Iran and brings additional security risks such as the expansion of Iranian militias on Israel’s borders.

But unlike former U.S. President Donald Trump, who granted one wish after another to Israeli Prime Minister Benjamin Netanyahu, Joe Biden is not playing ball. The recent attacks, many say, were intended to deliver a message to the Biden administration even more than to disrupt Iran’s nuclear program. The idea was to dissuade the United States from holding talks or at least to leverage Iran’s inability to guard its nuclear site to seek more concessions in negotiations. Israel is worried that Biden might rejoin the deal as it was. The recent attacks were meant to display to the United States that Israel would go alone to take on Iran, whether Biden approved or not.

Sanam Vakil, the deputy director and a senior research fellow in Chatham House’s Middle East and North Africa program, said Israel’s proactive strategy is designed to pressure the Biden administration to address Iran’s regional activities. “The Biden team is not currently looking to alter the JCPOA. For the time being, the objective is to see Iran return to compliance and roll back advances to its program,” she said. Vakil ruled out that the United States was seeking any more concessions that might assuage Israeli concerns. “Should this process succeed, the goal is, over time, to ‘strengthen and lengthen’ the deal to build out the timelines and some of the provisions, perhaps even addressing intercontinental ballistic missiles issue.”

Iran has demanded that the United States return to the deal first and only then would it reverse steps it took undermining the agreement. Seyed Hossein Mousavian, a Middle East security and nuclear policy specialist at Princeton University, said Iran fully complied with the deal even a year after Trump reneged on it and that the onus is on the United States to prove its commitment first. “The end state of continued Israeli sabotage would be a nuclear Iran, breaking Israeli supremacy on nuclear weapons in the Middle East,” Mousavian warned. He added that Iran cannot be denied long-range missiles when its enemies in the region are well stocked.

“Iranian ballistic missile ranges are maximum 2000 kilometers, while Saudi Arabia and Israeli ballistic missile ranges are 5,000 km. The first step should be for Israel and Saudi Arabia to limit their long-range missiles to 2,000 km. Iran is under sanctions on conventional arms, while Israel, Saudi Arabia, and other U.S. allies import hundreds of billions of dollars of the most sophisticated arms from the U.S. and all other world powers. Therefore, the second step should be a fair conventional arms arrangement for all countries in the Middle East,” Mousavian said.

Sabotage and prolonged economic sanctions have had a tactical effect by weakening Iran’s bargaining position in negotiations over the future of its nuclear program. The important strategic question is whether and when Israel and the United States will understand that neither offers a long-term solution to the deadlock with Iran.

Israel Should Support Biden’s Efforts to Revive the Iran Nuclear Deal – Reducing Iran’s breakout time and restoring robust monitoring are the most urgent priorities. A return to the JCPOA can achieve these goals.

Anchal Vohra is a Beirut-based columnist for Foreign Policy and a freelance TV correspondent and commentator on the Middle East.