30 Apr 2021 – Johanna Fernandez is an associate professor at Baruch College at the City University of New York, the author of The Young Lords, Radical History and host of A New Day from 7 to 8 am, Monday through Thursday, on Pacifica’s WBAI 99.5 FM-New York City. She is co-editor with Mumia Abu-Jamal of a special issue of the journal Socialism and Democracy on “The Roots of Mass Incarceration in the US: Locking Up Black Dissidents and Punishing the Poor”; Dr. Fernández is a member of the Mumia Abu Jamal Coalition, the editor of Writing on the Wall: Selected Prison Writings of Mumia Abu-Jamal, and the writer and producer of the film, Justice on Trial: The Case of Mumia Abu-Jamal. She was recently interviewed by Ann Garrison about recent developments in the case of Mumia Abu-Jamal. 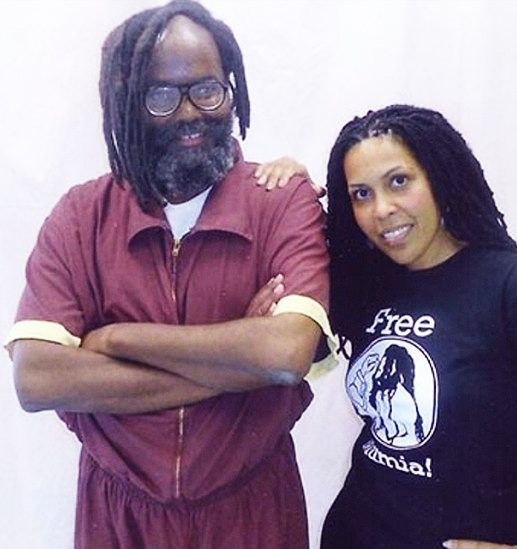 Ann Garrison: Mumia has finally had the open-heart surgery that his team and his wife had such a hard time getting any information about beforehand.

Johanna Fernandez: That’s correct. But Mumia’s chosen doctor, Dr. Ricardo Alvarez, has not been given access to the surgeons. Mumia was finally able to call his wife Wadiya Abu-Jamal several days before the surgery, but at that point he was very weak and was only able to whisper to her that he would be undergoing surgery two days later. He was allowed to call her after the surgery, and she said he sounded strong.

AG: Was there any response to the campaign to remove the shackles – the four-point restraints – ahead of Mumia’s surgery.

JF: We still don’t know. What we do know is that the prison recorded a statement or message for those who were calling on behalf of Mumia. I don’t know the details of what that message was or if it remains on their system, but that’s a signal that people were calling, that prison authorities were paying attention, and that they’re being forced to develop and craft a message to essentially tell Mumia’s supporters to step back.

Medically, the shackling of a patient is barbaric. It should be illegal for a hospital, for a nurse or a doctor to implement a policy that is, objectively speaking, contrary to the health of their patients.

AG: Where can people find the governor’s phone number and those of other officials to contact?

JF: They can go to letMumiaout.com for this information.

AG: Today I read in a medical journal that four-point restraints are used for patients with psychiatric illnesses or altered mental status who might become violent in the emergency department. That’s obviously not Mumia. So I think we can assume that this is about punishment and making an example of him. Could you talk about the example the state of Pennsylvania is making of Mumia? 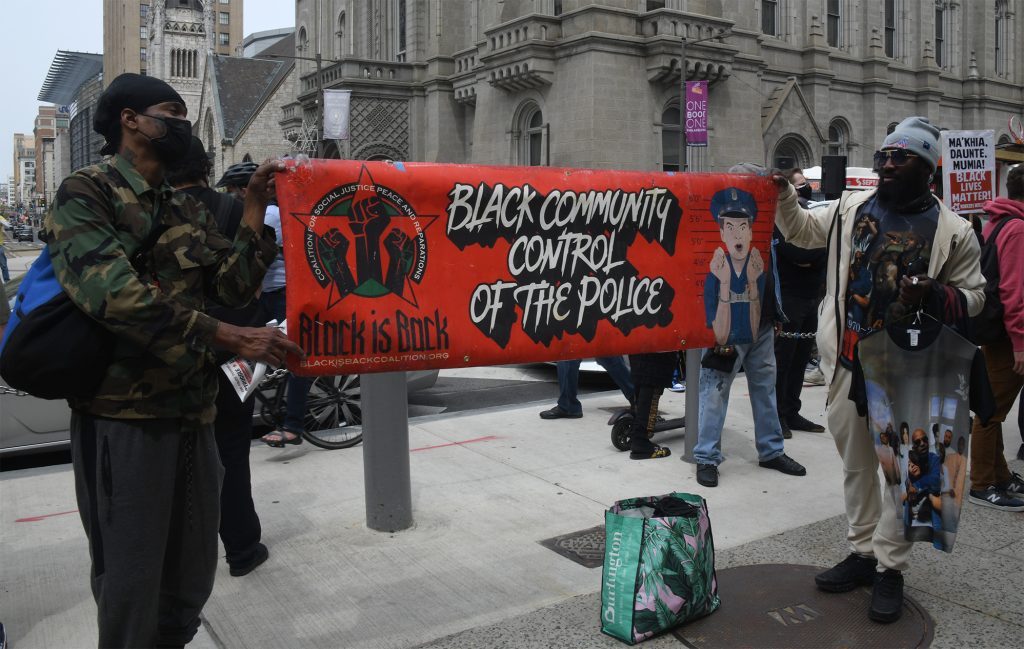 April 24 rally in Philadelphia in support of Mumia Abu-Jamal on his birthday.

JF: Well, firstly, this is not particular to Mumia. Although Mumia is a special case – he is a political prisoner who was framed by the Philadelphia police in 1981 – the practice of shackling prisoners is widespread across the country and in Pennsylvania for certain. And part of what I’ve written, and what we know, is that this is truly an echo of slavery.

The echoes of slavery here are loud and clear. Chattel slavery in the Americas is the institution which for the first time in human history produced the global distribution and mass use of handcuffs, shackles and fetters – to bring enslaved Africans to heel. So part of what we see, as James Baldwin wrote, is that history is in the present and we’re living with history in unconscious ways.

In every generation, it seems the American government has thought to make an example of people who dare to fight the status quo, to fight empire, to fight the state. In the late 19th century, it was the Haymarket martyrs, anarchist, socialist and communist labor activists, who were literally sent to their deaths, executed for their labor activism in that period.

After that, in the early 20th century, we had the case of Sacco and Vanzetti, two Italian anarchists who were also executed by the state for their political activism. And, in the post-civil rights and Black Power Movement era, the show trial for the state was that of Mumia Abu-Jamal, sentenced to death in the 1980s for the alleged killing of a white police officer.

Mumia is a former Black Panther, a muckraker, radio journalist – an award-winning radio journalist at the time of his incarceration – and wrote a New York Times bestseller from death row, the first book that humanized death row from the inside. And in the 1990s, you probably recall that Mumia Abu-Jamal was like the Che Guevara of our time. He was resisting empire from the inside, defying everything that we think of when we think of someone on death row.

“Where is my money? I was promised money. And I’ve been writing to you about it and calling the office to no avail. What do I have to do to get the money? Where do I have to sign?”

And this is what the state does. It wants to make an example of people who resist the state to send a message that this is what might happen to you. If you dare challenge the highest authority in the country.

And so there’s this very incestuous relationship between the Fraternal Order of Police, which is the union of the police in Philadelphia, and the whole carceral system. And this is a political case. It involves a veteran Black Panther and a white police officer. And in this country, there is no middle ground to killing a white police officer. 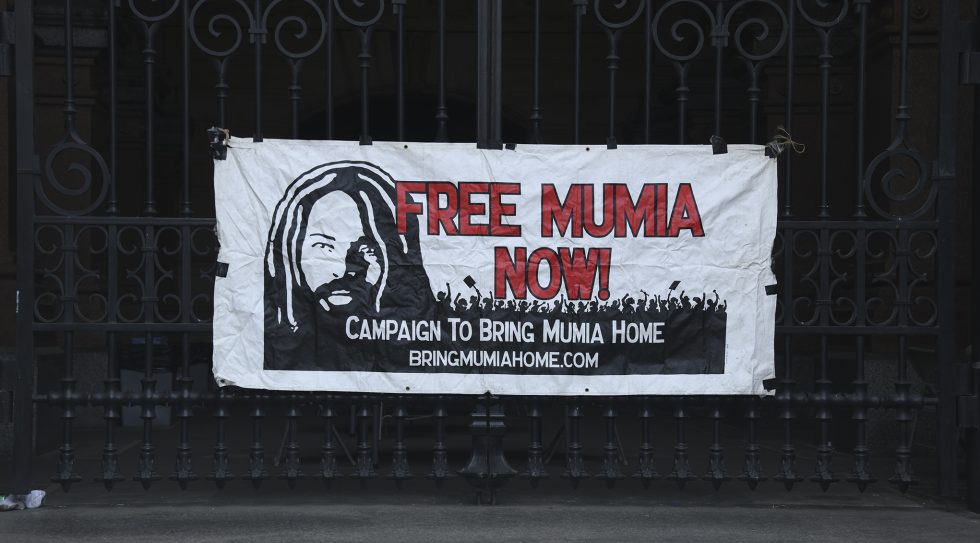 And how do we know that? Because in the last three years, evidence was recovered from the prosecutor’s office that led to the discovery of a letter handwritten by Robert Chobert, the key witness in the prosecution’s case, in the original trial.

And in that letter, Robert Chobert asked then prosecutor Joseph McGill, “Where is my money? I was promised money. And I’ve been writing to you about it and calling the office to no avail. What do I have to do to get the money? Where do I have to sign?”

So that’s all to say that the state is invested in keeping the media behind bars. It’s invested in keeping Mumia behind bars because of what Mumia represents politically in this country. And I think their time is up, because of the emergence of this new evidence, but also because of this moment of exposure of police violence, brutality and homicidal character in the United States. And Mumia’s defense is organized around the corruption and tampering with evidence on the part of the police to obtain a conviction of a former Black Panther. 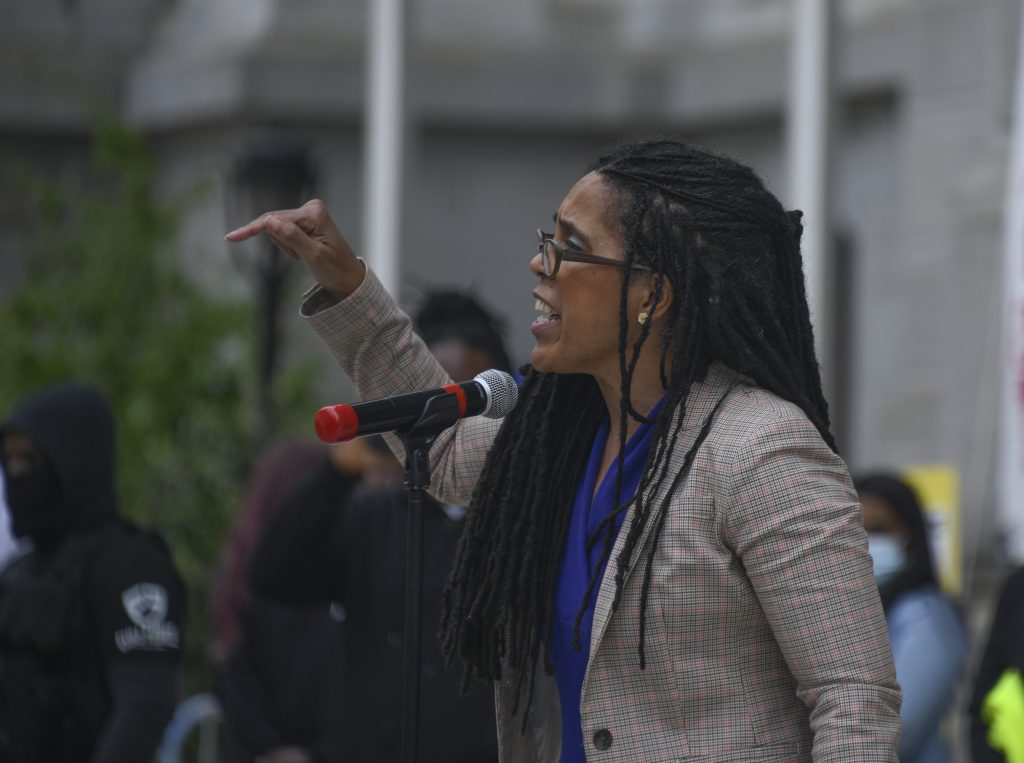 And so I think that the state is running scared and they’re going to try to do everything within their power to make sure that Mumia dies in prison before they’re forced to account for all of the prosecution’s violations of the law and for framing him.

JF: Yeah. So Gary Wakshul was the police officer assigned to guard over Mumia at the time of Mumia’s hospitalization in 1981, when he was shot by police. We believe it was the officer who died at the crime scene, Daniel Faulkner, who shot him. Mumia was shot at the crime scene and had to be taken to the hospital. And by the way, at that time, with a bullet in his chest, he was also shackled by the cop who was assigned to him.

Officer Gary Wakshul filled out a report and said, “The Negro male made no comment.” At a meeting two months later, in a room filled with other police officers and in the presence of the prosecutor, Joe McGill, he said, “Oh, I now remember that Abu-Jamal said, ‘I shot the motherfucker! And I hope he dies!’ So that’s Gary Wakshul.

The night that Mumia was hospitalized and underwent surgery, that officer said, in a report, “The Negro male made no comment.” And that statement that Wakshul made was corroborated by the attending doctor at the time, who said that Mumia was so weak and so impaired that he could not have made a statement.

And that doctor was there attending to Mumia throughout the night. And he said Mumia said nothing like what was alleged by Gary Wakshul and by the other officer, Officer Bell, who also said that he heard Mumia incriminate himself and say that he did it. Officer Bell and hospital security guard Priscilla Durham testified at trial, but Sabo blocked Wakshul from testifying. 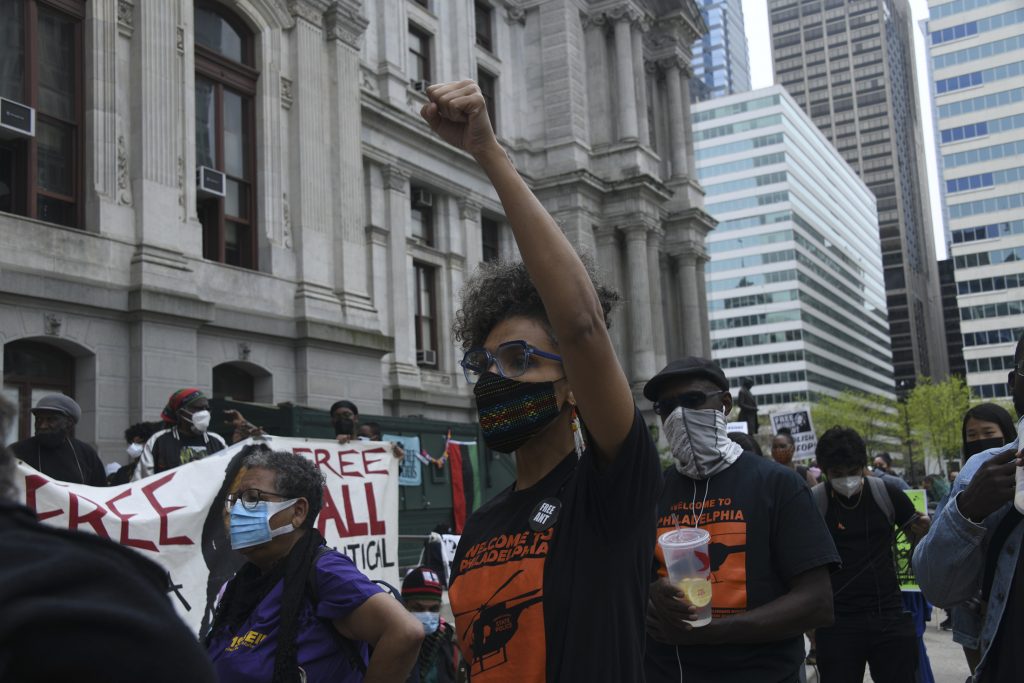 AG: OK, is there anything else you’d like to say right now?

JF: Yes, I think that his case always raises larger questions about the barbarism and problems with the criminal justice system. Only five years ago, Mumia fainted at the prison infirmary and was rushed to the hospital. And months later, our doctors determined that what was wrong with Mumia was that he had Hepatitis C.

The United States has 5% of the world’s population but imprisons 25% of the world’s prisoners, and the problem of incarceration, its racist character, is really a reflection of everything that’s wrong with American society.

And at that point we had to sue the prison, the Department of Corrections of Pennsylvania, to force that institution to give him the Hepatitis C medication he needed to survive, right? Because Hepatitis C is a disease of the liver that leads to death.

We went to court for two years and, belatedly, Mumia got the Hepatitis C medication he needed. He had already developed cirrhosis of the liver, but he lived. And as a result of that, other prisoners across the country are citing his case and getting the medication they need to survive.

What Mumia’s case is raising, once again, is a question of the barbarism of the criminal justice system and its racist character and the echoes of slavery within it, with this problem of shackling, which is not just a problem for Mumia, as I said previously, but one that other prisoners face, including pregnant women who are shackled during labor.

And I want to recall the words of the Russian novelist, Dostoevsky, who said that the degree of civilization in a society can be judged by entering its prisons.

But prisoners, because of an unrelenting law-and-order campaign that’s been carried out in this country over the last 40 years – by Republicans and Democrats – are not seen as human beings. And that is to our peril because when you erode standards of freedom anywhere in society, as we see happening in the prisons, eventually that constriction of freedom comes back to affect all of us.

Justice On Trial: The Case of Mumia Abu-Jamal (2010)
from Kouross Esmaeli on Vimeo.