Unity at Last: The Palestinian People Have Risen 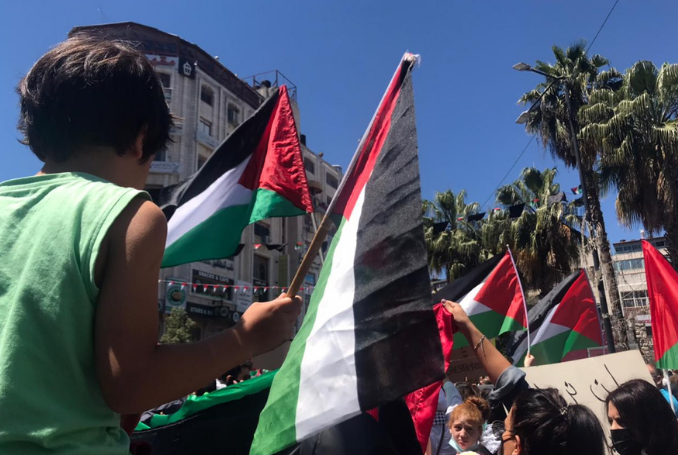 21 May 2021 – From the outset, some clarification regarding the language used to depict the ongoing violence in occupied Palestine, and also throughout Israel. This is not a ‘conflict’. Neither is it a ‘dispute’ nor ‘sectarian violence’ nor even a war in the traditional sense.

It is not a conflict, because Israel is an occupying power and the Palestinian people are an occupied nation. It is not a dispute, because freedom, justice and human rights cannot be treated as if a mere political disagreement. The Palestinian people’s inalienable rights are enshrined in international and humanitarian law and the illegality of Israeli violations of human rights in Palestine is recognized by the United Nations itself.

If it is a war, then it is a unilateral Israeli war, which is met with humble, but real and determined Palestinian resistance.

Actually, it is a Palestinian uprising, an Intifada unprecedented in the history of the Palestinian struggle, both in its nature and outreach.

For the first time in many years, we see the Palestinian people united, from Jerusalem Al Quds, to Gaza, to the West Bank and, even more critically, to the Palestinian communities, towns and villages inside historic Palestine – today’s Israel.

This unity matters the most, is far more consequential than some agreement between Palestinian factions. It eclipses Fatah and Hamas and all the rest, because without a united people there can be no meaningful resistance, no vision for liberation, no struggle for justice to be won.

Right-wing Israeli Prime Minister Benjamin Netanyahu could never have anticipated that a routine act of ethnic cleansing in East Jerusalem’s neighborhood of Sheikh Jarrah could lead to a Palestinian uprising, uniting all sectors of Palestinian society in an unprecedented show of unity.

The Palestinian people have decided to move past all the political divisions and the factional squabbles. Instead, they are coining new terminologies, centered on resistance, liberation and international solidarity. Consequently, they are challenging factionalism, along with any attempt at making Israeli occupation and apartheid normal. Equally important, a strong Palestinian voice is now piercing through the international silence, compelling the world to hear a single chant for freedom.

The leaders of this new movement are Palestinian youth who have been denied participation in any form of democratic representation, who are constantly marginalized and oppressed by their own leadership and by the relentless Israeli military occupation. They were born into a world of exile, destitution and apartheid, led to believe that they are inferior, of a lesser race. Their right to self-determination and every other right were postponed indefinitely. They grew up helplessly watching their homes being demolished, their land being robbed and their parents being humiliated.

Finally, they are rising.

Without prior coordination and with no political manifesto, this new Palestinian generation is now making its voice heard, sending an unmistakable, resounding message to Israel and its right-wing chauvinistic society, that the Palestinian people are not passive victims; that the ethnic cleansing of Sheikh Jarrah and the rest of occupied East Jerusalem, the protracted siege on Gaza, the ongoing military occupation, the construction of illegal Jewish settlements, the racism and the apartheid will no longer go unnoticed; though tired, poor, dispossessed, besieged and abandoned, Palestinians will continue to safeguard their own rights, their sacred places and the very sanctity of their own people.

Yes, the ongoing violence was instigated by Israeli provocations in the Sheikh Jarrah neighborhood in East Jerusalem. However, the story was never about the ethnic cleansing of Sheikh Jarrah alone. The beleaguered neighborhood is but a microcosm of the larger Palestinian struggle.

Netanyahu may have hoped to use Sheikh Jarrah as a way of mobilizing his right-wing constituency around him, intending to form an emergency government or increasing his chances of winning yet a fifth election. His rash behavior, initially compelled by entirely selfish reasons, has ignited a popular rebellion among Palestinians, exposing Israel for the violent, racist and apartheid state that it is and always has been.

Palestinian unity and popular resistance have proven successful in other ways, too. Never before have we seen this groundswell of support for Palestinian freedom, not only from millions of ordinary individuals across the globe, but also from celebrities – movie stars, footballers, mainstream intellectuals and political activists, even models and social media influencers. The hashtags #SaveSheikhJarrah and #FreePalestine, among numerous others, are now interlinked and have been trending on all social media platforms for weeks. Israel’s constant attempts at presenting itself as a perpetual victim of some imaginary horde of Arabs and Muslims are no longer paying dividends. The world can finally see, read and hear of Palestine’s tragic reality and the need to bring this tragedy to an immediate end.

None of this would be possible were it not for the fact that all Palestinians have legitimate reasons and are speaking in unison. In their spontaneous reaction and genuine, communal solidarity, all Palestinians are united, from Sheikh Jarrah, to all of Jerusalem, to Gaza, Nablus, Ramallah, Al-Bireh and even Palestinian towns inside Israel – Al-Lud, Umm Al-Fahm, Kufr Qana and elsewhere. In Palestine’s new popular revolution, factions, geography and any political division are irrelevant. Religion is not a source of divisiveness but of spiritual and national unity.

The ongoing Israeli atrocities in Gaza are continuing, with a mounting death toll. This devastation will continue for as long as the world treats the devastating siege of the impoverished, tiny Strip as if irrelevant. People in Gaza were dying long before the Israeli airstrikes began blowing up their homes and neighborhoods. They were dying from the ack of medicine, polluted water, the lack of electricity and the dilapidated infrastructure.

We must save Sheikh Jarrah, but we must also save Gaza; we must demand an end to the Israeli military occupation of Palestine and, with it, the system of racial discrimination and apartheid. International human rights groups are now precise and decisive in their depiction of this racist regime, with Human Rights Watch – and Israel’s own rights group, B’tselem, joining the call for the dismantlement of apartheid in all of Palestine.

Speak up. Speak out. The Palestinians have risen. It is time to rally behind them.