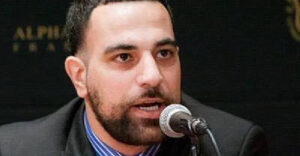 Janine Jackson interviewed the US Campaign for Palestinian Rights’ Ahmad Abuznaid about Israel/Palestine apartheid for the May 7, 2021, episode of CounterSpin. This is a lightly edited transcript.

Janine Jackson: If there is a reality for which US corporate news media have a rigid template, it’s that of Palestine and Israel. We get leaden language like that of a recent New York Times story:

Israeli officials argue that if Palestinians do not have their own state, they have only themselves to blame, having repeatedly rejected offers of statehood, though Palestinians considered the offers untenable. They blame Palestinian leaders for abandoning peace talks: Palestinians say the reverse is true.

That the frame can be static, but not balanced, is reflected in the Reuters report on Sheikh Jarrah—the East Jerusalem neighborhood where Palestinians are being evicted from their homes by court rulings favoring settlers—it gets to the next-to-last paragraph before noting that “most countries regard settlements that Israel has built there as illegal.” 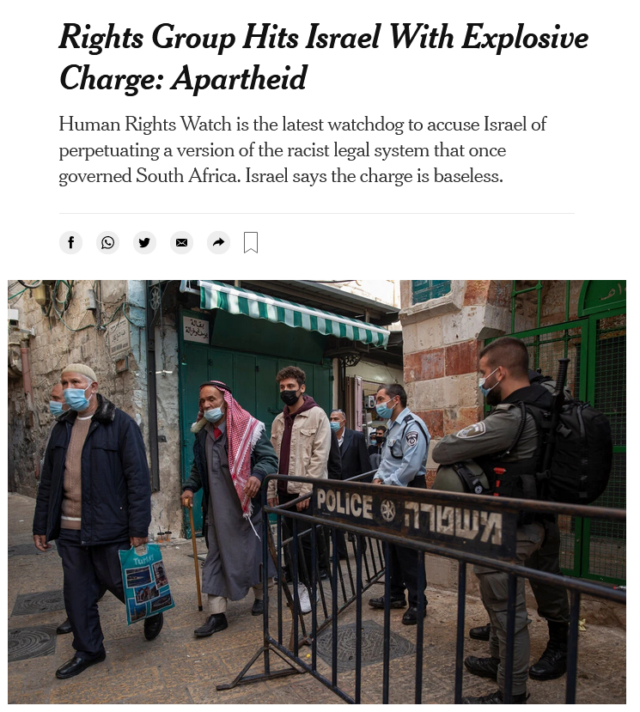 But the world is changing, and the complexity of understanding about Palestine and Israel is part of that, stale corporate media storytelling notwithstanding. How does that energy and new thinking translate to political change?

Ahmad Abuznaid is executive director of the US Campaign for Palestinian Rights. He joins us now by phone. Welcome to CounterSpin, Ahmad Abuznaid.

Ahmad Abuznaid: Thank you, Janine, good to be here with you.

JJ: The news, of course, is always different. Right now it’s Sheikh Jarrah; it’s the ravages of Covid in the Gaza Strip; and it’s this Human Rights Watch report that said that Israel has passed a “threshold,” that the suppression of Palestinian rights answers to the description of apartheid. They, quite defensively, said, we’re not saying it’s like South Africa, you know, “apartheid” doesn’t legally describe states; it describes actions….

But the response to that description—How dare they? How dare they use that word?—shows how important language and framing can be. And with that, I’m interested in work that I’ve seen about framing that centers human rights for Palestinians in the conflict-resolution conversation. So, just broadly, what are your thoughts about the state of US public understanding on Palestine, and do you feel it changing? 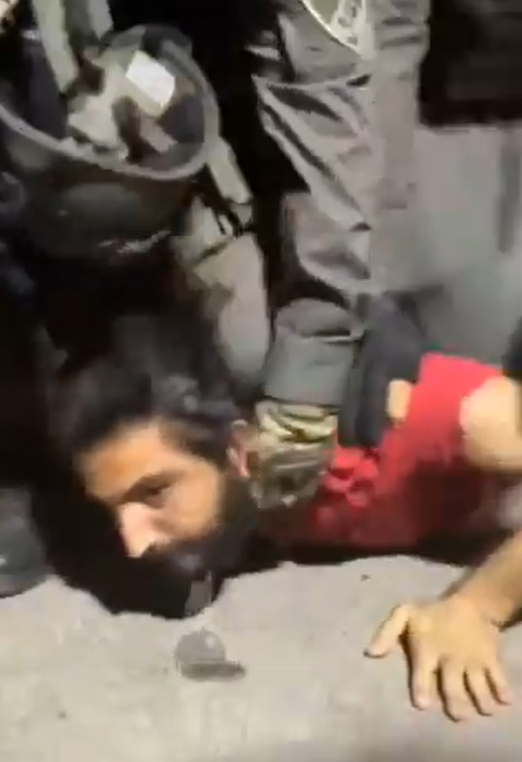 AA: Yeah, that’s a good way to start the conversation. I think the conversation has shifted. I think that decades of activism and organizing from Palestinian solidarity organizations here in the US, and Palestinian organizations here in the US, have led us to this point where now we have folks in US Congress supporting positions that the grassroots have been calling for for decades.

And that’s very important, because we often see that legislators or elected officials are forced to change their positions based on the will of the people. And what we’ve also seen over the last few years is a new generation of elected officials who’ve grown up as a part of progressive activist and organizing circles that have welcomed Palestinian freedom and justice as a core part of their organizing ideology.

While I’m saying that, I also would say that there’s such a long way to go. I don’t think the average American really understands what it means when their politicians wax poetic about their allegiance or support to Israel, either during presidential campaigns or when bills come up in Congress. I don’t think the average American truly understands what Israel is and what it’s been doing to the Palestinian people, and how our tax dollars are actually aiding in human rights abuses.

So the fact that Betty McCollum introduced HR 2590 is huge, it’s historic; the fact that we have so many co-sponsors signing on to join the effort is historic. But the reality is, we have such a long way to go to make sure that US tax dollars aren’t actively being utilized in the enforcement of an apartheid system and settler colonialism today.

Last thing, I’ll just wrap, because it really is on my mind, everything that’s happening in Sheikh Jarrah right now is really, really heartbreaking to witness. But on another level, it’s unfortunate that we have to see video footage to be affirming of what Palestinians have been saying for decades. There’s a monstrosity to settler colonialism that sometimes words, or even interviews, can’t capture, but when you see videos of settlers proudly proclaiming that they’d steal the land because if not them, someone else would steal it; or videos with women and children and activists who are engaging in nonviolent resistance in front of their homes, when you see those people being brutalized, arrested, knees on their necks, it’s incredibly, incredibly infuriating.

And so I just want to lift up the people of Sheikh Jarrah right now, and the surrounding communities in East Jerusalem, and all over, of course, Palestine, because this, really, what we’ve seen in Sheikh Jarrah is a microcosm of what we’ve experienced for the last 70+ years. So I’ll stop there for the opening.

JJ:  And thank you. In a way, it’s analogous to this Human Rights Watch report, which news media accounts are sort of saying, “It’s amazing,” I think a New York Times piece called it “explosive”; and then, somewhere in it, they say, well, actually, this builds on the work and the statements and the testimony of lots of groups over lots of years. So it’s new and it’s not new, and there ought to be a way for news media to convey that. 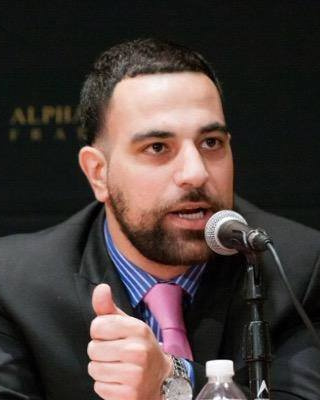 Ahmad Abuznaid: “We have something to say. We’ve been saying it, but, unfortunately, major media outlets have been unwilling to take the leap and actually hear the Palestinian people and hear our story and share our stories.”

AA: Yeah, absolutely. And, unfortunately, what we’ve seen is an unwillingness to really show the perspective inside of the Palestinian people. And sometimes, when it does make it to a major media outlet or market, it’s really watered down.

And we’ve all, as Palestinian advocates, been through that process. We’ll pitch an op-ed, and we’ll get so many revisions, or we just won’t hear back, and the op-ed would not have the opportunity to be placed.

And so we have something to say. We’ve been saying it, but, unfortunately, major media outlets have been unwilling to take the leap and actually hear the Palestinian people and hear our story and share our stories.

JJ: I saw a great conversation that you were part of, hosted by the American-Arab Anti-Discrimination Committee, with Noura Erakat and Ajamu Dillahunt, about Palestinian solidarity with Black communities, and just putting things in an international context, connecting us.

And you were… I didn’t mention earlier, you were co-founder of Dream Defenders, which I know informs your work. These aren’t connections that news media make, between Palestinians and African Americans; they obscure them, actually, but people see those connections, right? That international connection, that across-border connection; people see that, even if media hide it.

AA: That’s right, and I think we’re seeing new opportunities for that through social media. In fact, in the summer uprisings in Ferguson, social media played a huge role in connecting Palestinian activists and Black activists over the shared experience of being teargassed. It was literally in-the-moment, live-tweeting support from Palestinians on the ground, saying to their counterparts in Ferguson, “This is how you resist; this is the direction you should run in; this is what you should wash your eyes out with.” And, really, that was born out of a genuine sentiment of solidarity.

And what’s most beautiful, and what we like to highlight at Dream Defenders, is that the work that we were doing, and, again, the work that so many others have been doing, is a part of a historic connection between the Black freedom movement, the Black Power movement, and the Palestinian liberation movement; this relationship has existed for decades.

And folks like Alice Walker and Angela Davis have been mentioning that to us, but, also, you can look at the record of the Black Panther Party, who were unapologetic about their stance on Palestine. And, similarly, organizations like SNCC, the Student Nonviolent Coordinating Committee, which certainly was a part of a lot of controversy when they made their statement on Palestine. So we know this is a part of a legacy, a rich tradition in fighting for all peoples across the world, all colonized peoples, all peoples who have been victims of imperialism, to be able to join together and envision a better future for us all.

JJ: I just wanted, finally, to give you an opportunity, in terms of talking about positive interventions, to talk about Decolonize Palestine, to talk about that resource collection, that project. What is that about, and how do you hope that folks will use that? What kind of intervention do you see that serving?

AA: Even, I believe, AOC was tweeting just the other day about Puerto Rico. And people are talking a lot about statehood as one of the solutions, but she mentioned decolonization as a necessary part of the conversation as it relates to Puerto Rico.

And an analogy that comes to mind is when Dr. King suggested, in his later years, that he feared that he had actually marshaled his people “into a burning house.”

And so these are all structures that need to be abolished if we’re to truly see a reality on the ground that fosters an environment where, again, Jews and non-Jews can live happily side-by-side, equally enjoying the Holy Land that we all cherish so much. But Zionism is what is in the way of that possibility, and so we must decolonize and envision a future where we can actually be free and just and human.

JJ: We’ve been speaking with Ahmad Abuznaid; he’s executive director of the US Campaign for Palestinian Rights. You can find their work online at USCPR.org. Ahmad Abuznaid, thank you so much for joining us this week on CounterSpin.

Janine Jackson is FAIR’s program director and producer/host of FAIR’s syndicated weekly radio show CounterSpin. She contributes frequently to FAIR’s newsletter Extra!, and co-edited The FAIR Reader: An Extra! Review of Press and Politics in the ’90s (Westview Press). She has appeared on ABC‘s Nightline and CNN Headline News, among other outlets, and has testified to the Senate Communications Subcommittee on budget reauthorization for the Corporation for Public Broadcasting. Her articles have appeared in various publications, including In These Times and the UAW’s Solidarity, and in books including Civil Rights Since 1787 (New York University Press) and Stop the Next War Now: Effective Responses to Violence and Terrorism (New World Library). Jackson is a graduate of Sarah Lawrence College and has an M.A. in sociology from the New School for Social Research.