Israel’s New Government Will Deepen Rifts, Not Heal Them

The symbolic moment of a Palestinian party sitting in government alongside settler leaders will turn sour all too soon. 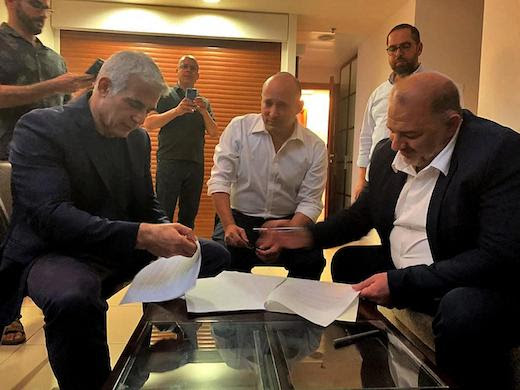 4 Jun 2021 – The photo was unprecedented. It showed Mansour Abbas, leader of an Islamist party for Palestinians in Israel, signing an agreement on Wednesday [2 Jun] night to sit in a “government of change” alongside settler leader Naftali Bennett.

Caretaker Prime Minister Benjamin Netanyahu will fervently try to find a way to break up the coalition in the next few days, before a parliamentary vote takes place. But if he fails, it will be the first time in the country’s 73-year history that a party led by a Palestinian citizen has joined – or been allowed to join – an Israeli government.

Aside from the symbolism of the moment, there are no other grounds for celebration. In fact, the involvement of Abbas’s four-member United Arab List in shoring up a majority for a government led by Bennett and Yair Lapid is almost certain to lead to a further deterioration in majority-minority relations.

There will be a reckoning for this moment, and Israel’s 1.8 million Palestinian citizens, a fifth of the population, will once again pay the heaviest price.

The sole reason that this makeshift coalition exists – the only glue holding it together – is the hostility of the various parties towards Netanyahu. In most cases, that is not a hostility towards his political positions; simply towards him personally, and towards the corrupting stranglehold he has exerted on Israel’s political system for the past 12 years.

The “change” referred to by this proposed government coalition begins and ends with the removal of Netanyahu. 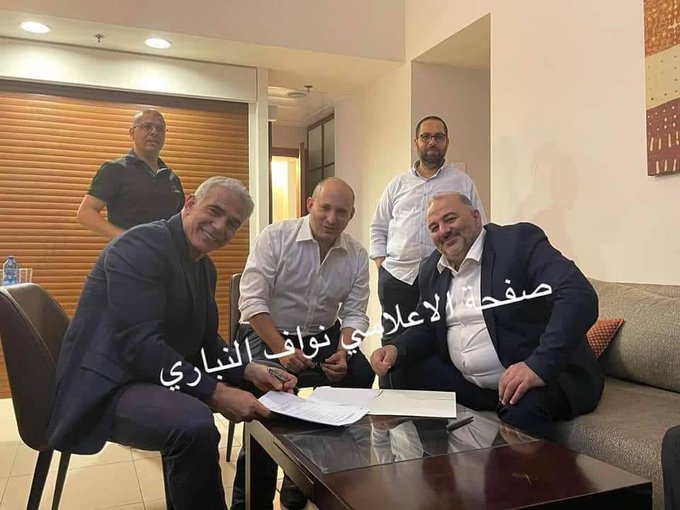 It barely needs stating again that Bennett, who will serve first as prime minister in rotation with Lapid, is even more right wing than Netanyahu. In fact, three of the new coalition’s main parties are at least, if not more, rabidly nationalistic than the Israel’s longtime leader. In any other circumstances, they would be enthusiastically heading into government with his Likud Party.

As Bennett and Mansour huddled inside a hotel near Tel Aviv to sign the coalition agreement as the clock ticked down on Lapid’s mandate to form a government, far-right demonstrators noisily chanted outside that Bennett was joining a “government with terror supporters”.

Much of the ultra-nationalist right is so incensed by Bennett’s actions that he and other members of his Yamina party have been assigned a security detail for fear of an assassination attempt.

No one has forgotten that it was Bennett’s own settler camp that produced Yigal Amir, the man who in 1995 shot dead the then-prime minister, Yitzhak Rabin, in a bid to foil the Oslo peace accords with the Palestinians. Amir killed Rabin in large part because the latter was seen to have betrayed the Jewish people by allowing “Arabs” – Palestinian parties in the parliament – to prop up his minority government from outside. They did so to pass legislation necessary to begin implementing the Oslo process.

The chain of events that followed the assassination are well-known. Israelis lurched further rightwards and elected Netanyahu. The Oslo track with Palestinian leader Yasser Arafat was derailed. A Palestinian intifada erupted. And – coming full circle – Netanyahu returned to power and is now Israel’s longest-serving prime minister.

Today’s potential Yigal Amirs are doubly offended by Bennett’s behaviour. They believe he has stabbed the right’s natural leader, Netanyahu, in the back, while at the same time allowing Abbas – seen by the right as Hamas’s man in the Knesset – to dictate policy to the Jewish owners of the land.