The Difference between ‘Woke’ and a True Awakening 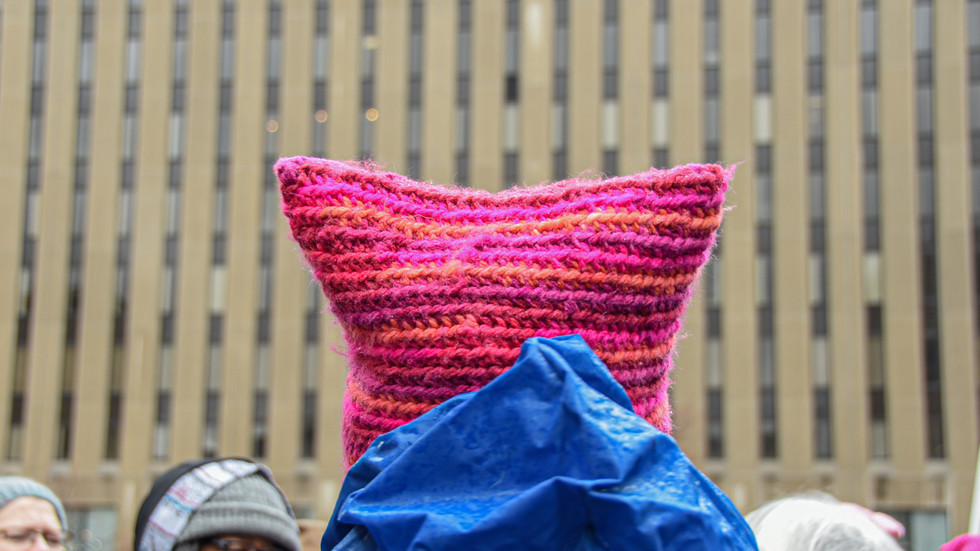 A woman wears a pink “pussy hat” as she takes part in a march.
© Whitney Saleski/SOPA Images/LightRocket via Getty Images

10 Jun 2021 – The supposedly liberal ‘wokeness’ and cancel culture have little to do with awakening to what’s going on in the world and trying to change it – it’s just noise for the sake of noise, while the status-quo is carefully preserved.

The usual liberal-conservative reproach to the so-called woke cancel culture is that it is too radical: Its partisans want to destroy all statues, cleanse our museums, rewrite our entire past… in short, they want to deprive us of our entire collective memory and purify our everyday language into a flat, heavily censored jargon. However, I think Ben Burgis is right in his claim that the woke agents of cancel culture are “Canceling Comedians While the World Burns”: Far from being ‘too radical’, their imposition of new prohibitions and rules is one of the exemplary cases of pseudo-activity, of how to make sure that nothing will really change by pretending to act frantically. No wonder new forms of capital, in particular anti-Trump tech capitalists (Google, Apple, Facebook), passionately support anti-racist and pro-feminist struggles – ‘woke capitalism’ is our reality. One does not really change things by prescribing measures which aim at establishing a superficial ‘just’ balance without attacking the underlying causes of the imbalance.

Here is a fresh case of the politically correct struggle against privilege: California’s Department of Education proposed that the gap between well-performing students and their less able peers must disappear. Professors should hold well-performing students back and push their less intellectual peers forward, as if they were all equal in abilities. Justification? “We reject ideas of natural gifts and talents,” since “there is no cutoff determining when one child is ‘gifted’ and another is not.” The goal is thus to “replace ideas of innate mathematics ‘talent’ and ‘giftedness’ with the recognition that every student is on a growth pathway.”

Also –  Slavoj Zizek: Israelis’ SHAME over what their state is doing in West Bank would be sign of truly belonging to Israel

This is a showcase of fake egalitarianism destined to just breed envy and hatred. We need good mathematicians to do serious science, and the proposed measures certainly don’t help in this regard. The solution? Why not more access to good education for everyone, better living conditions for the poor? And it is easy to imagine the next step in this direction of the false egalitarianism: Is not the fact that some individuals are much more sexually attractive than others also a case of supreme injustice? So should we not invent some kind of push towards equity in enjoyment also, a way to hold the more attractive back, since there is no cutoff determining when one person is sexually attractive and another is not? Sexuality effectively is a domain of terrifying injustice and imbalance… Equity in enjoyment is the ultimate dream of false egalitarianism.

There are rare voices of authentic Left opposition to this drive towards false justice – apart from Burgis, one should mention Angela Nagle and Katherine Angel. The only problem I have with Angel’s Tomorrow Sex Will Be Good Againis its title, which seems to imply that sex was once good (not-antagonistic) and will be that again. I’ve rarely read a book with whose basic premise I agreed so fully – since this premise is formulated concisely in the publicity paragraph for the book, I will shamelessly quote it:

“Women are in a bind. In the name of consent and empowerment, they must proclaim their desires clearly and confidently. Yet sex researchers suggest that women’s desire is often slow to emerge. And men are keen to insist that they know what women—and their bodies—want. Meanwhile, sexual violence abounds. How can women, in this environment, possibly know what they want? And why do we expect them to? Katherine Angel challenges our assumptions about women’s desire. Why, she asks, should they be expected to know their desires? And how do we take sexual violence seriously, when not knowing what we want is key to both eroticism and personhood?”

Also –  Slavoj Žižek: Biden’s words about Putin’s (lack of) soul are a regression to vulgar racism

The parts italicised (by me) are crucial: Any feminist theory should take into account not-knowing as a key feature of sexuality and ground its opposition to violence in sexual relationship not in the usual terms of ‘yes means yes’, but by evoking this not-knowing. This is why the motto that women “must proclaim their desires clearly and confidently” is not just a violent imposition on sexuality but literally de-sexualizing, a promotion of ‘sex without sex’. This is why feminism, in some instances, enforces precisely the same ‘shaming and silencing’ of women’s sexuality that it seeks to oppose. What lies under the direct physical (or psychological) violence of unwanted male sexual advances is the patronizing assumption he knows what the ‘confused’ woman doesn’t know (and is thereby legitimized to act upon this knowledge). It could thus be argued that a man is violent even if he treats a woman respectfully – as long as it’s done under this presumption of knowing more about her desires than she does herself.

This in no way implies that women’s desire is in some sense deficient compared to that of men (who are supposed to know what they want): The lesson of psychoanalysis is that a gap always separates what we want from what we desire. It may happen that I not only desire something but want to get it without explicitly asking for it, pretending that it was imposed on me – demanding it directly would ruin the satisfaction of getting it. And inversely, I may want something, dream about it, but I don’t desire to get it – my entire subjective consistency depends on this not-getting-it: Directly getting it would lead to a collapse of my subjectivity. We should always bear in mind that one of the most brutal forms of violence occurs when something that we secretly desire or fantasize about (but are not ready to do in real life) is imposed on us from outside.

Also – Slavoj Zizek feat. Rammstein: ‘We have to live till we die’ is the Covid-era inspiration we all need

The only form of sex that fully fits the politically correct criteria is a sado-masochist contract.

Leftist partisans of political correctness often reproach to its critics that their focus on PC ‘excesses’, on the prohibitive aspect of cancelling and woke culture, ignores a much graver threat of censorship. Just in the UK, we have police infiltrating trade unions, regulation of what gets published in the media and appears on TV, underage children from Muslim families questioned for terrorist links, up to single events like the continuing illegal imprisonment of Julian Assange… While I agree that censorship is much worse than the ‘sins’ of cancel culture, I think it provides the ultimate argument against the woke culture and PC regulations: Why does the PC Left focus on regulating details of how we speak, etc. instead of bringing out the above-mentioned much bigger things? No wonder Assange was also attacked by some PC feminists (not only) from Sweden who did not support him because they took seriously the accusations about his sexual misconduct (which were later dismissed by the Swedish authorities). An unproven infraction of PC rules outweighed the fact of being a victim of state terror…

However, when the woke stance touches on a really important aspect of the reproduction of the hegemonic ideology, the reaction of the establishment changes from ridiculing the opponent for its excesses to a panicky attempt of violent legal suppression. We often read in our media complaints about the ‘excesses’ of critical gender and race studies which try to reassess the hegemonic narrative of the American past. But we are now in the middle of an ongoing reactionary counter-offensive to reassert a whitewashed American myth. New laws are proposed in at least 15 states all across the US that would ban the teaching of ‘critical race theory’, the New York Times’ 1619 Project, and, euphemistically, ‘divisive concepts’.

Also – Slavoj Zizek: We’re at a grim crossroads in this pandemic: one path leads to utter despair, the other to total extinction

Are the prohibited theories really divisive? Yes, but only in the precise sense that they oppose (divide themselves from) the hegemonic official myth which is already in itself divisive: It excludes some groups or stances, putting them in a subordinate position. Furthermore, it is clear that to the partisans of the official myth, truth does not matter here but only the ‘stability’ of the founding myths – these partisans, not those dismissed by them as ‘historicist relativists’, are effectively practicing the ‘post-truth’ stance: They like to evoke ‘alternate facts’, but they exclude alternate founding myths.

While criticizing the PC cancelling culture, we should thus always bear in mind that we share their goals (for feminism, against racism, etc.), and that we criticize their inefficiency in reaching these goals. With advocates of the founding myths, the story is a different one: Their goals are unacceptable, and we hope they will fail to reach them.