What Went Right This Week: The Other G7, Plus More Positive News

10 Jun 2021 – Art installations cut straight to the point at the G7, Israel became the first nation to ban fur, and a plan was announced for a basic income trial in Wales, plus the week’s other positive news. 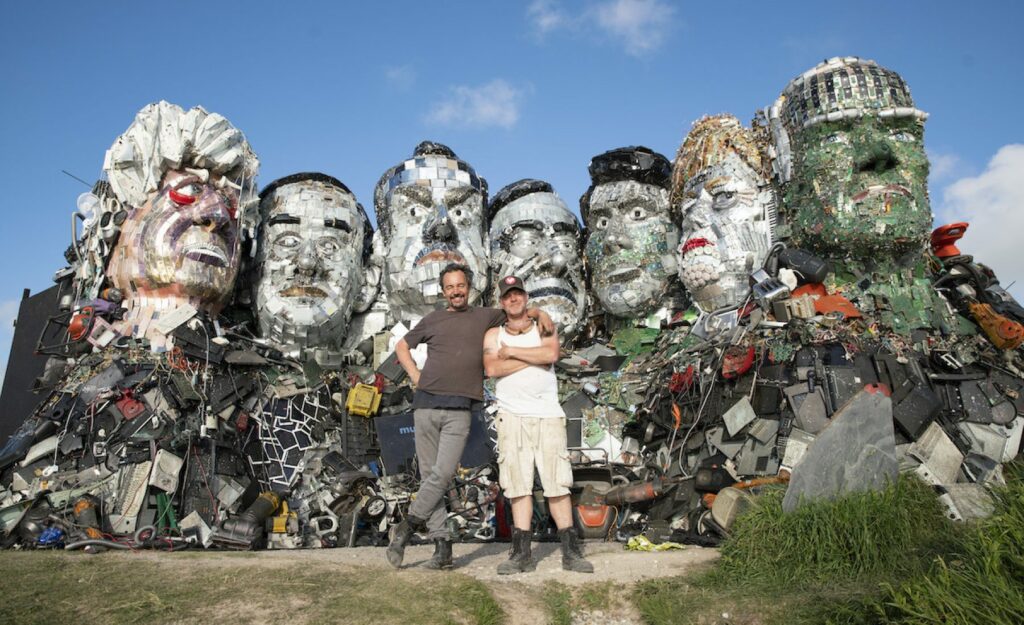 Cheeky art installations cut to the chase at the G7

Recent G7 summits have been panned for failing to tackle the big issues of the day. Some have suggested that the world leaders present are better at generating hot air than reducing it.

Reminding the G7 about its obligations to people and the planet this week were the artists Joe Rush and Alex Wreckage (main picture, above). They created a Mount Rushmore-style sculpture of the G7 leaders out of electronic waste, which they dubbed ‘Mount Recyclemore’.

The robot-like faces will stare across Cornwall’s Carbis Bay at the real leaders this weekend as they convene for the latest G7 summit. The installation will quietly urge them to tackle the growing scourge of electronic waste, 15.9m tonnes of which is produced by G7 nations annually.

Separately, two giant footprints (pictured) appeared on the sand in Carbis Bay to highlight the size of the G7’s carbon footprint compared to the rest of the world. Other activist-led activity taking place alongside the G7 includes Sea7, an event where conservationists will discuss solutions to ocean degradation.

The G7 backed a ‘historic’ deal to tax multinationals

Before their representatives decamped to Cornwall for the G7 summit, the UK, France, Italy, Germany, Japan, Canada and the US reached a “historic” deal to make multinationals pay more tax.

Finance ministers of the seven nations agreed to tackle tax avoidance by making companies pay more in the countries where they do business. They also agreed to a minimum corporate tax rate of 15 per cent.

The rules will only apply in the G7, and 15 per cent is on the low side compared to existing corporate tax rates. Nevertheless, the move is considered a progressive step towards a global agreement on tax reform, which once seemed unlikely.

Animal rights campaigners claimed a major victory this week, as Israel became the first country to ban the sale of fur. The historic step comes as other nations reconsider their relationship with a controversial material that is fast falling out of fashion.

“Israel has made history and put yet another nail in the cruel fur industry’s coffin,” said Mimi Bekhechi, vice president of international programmes at Peta.

“With the British government currently exploring a similar ban – which would make it the first country in Europe to close its borders to fur – we’re getting ever closer to a day when no animals are suffocated or skinned alive for collars and cuffs.”

Drugs offered hope for people with breast cancer and Alzheimer’s

A trial of the breast cancer drug olaparib found that it reduced the risk of invasive recurrence, secondary cancers or death by over 40 per cent, according to the Guardian.

Meanwhile, the first new treatment for Alzheimer’s disease for nearly 20 years was approved by US regulators, potentially paving the way for its use in the UK. Aducanumab was found to slow cognitive decline, although some scientists remain unconvinced as to its effectiveness.

English landowners will be paid to plant trees

Landowners in England are to be paid thousands of pounds to create woodlands that boost biodiversity and reduce flooding, the UK government announced on Wednesday.

The Forestry Commission scheme will cover the costs of saplings and planting, and pay bonuses of up to £2,800 a hectare for woodland that helps wildlife recover, £2,200/ha for woodland with long-term public access, and £1,600/ha for riverside trees. It has a £16m budget for the first year.

The scheme is part of a post-Brexit shake-up of farming policy. Forestry Commission chair, Sir William Worsley, said: “This grant gives everyone the opportunity to see woodland creation as a financially and environmentally rewarding option.”

A basic income pilot was announced for Wales

Wales is to become the latest place to trial a universal basic income (UBI), its government announced this week. Under the scheme, 5,000 children and adults could receive up to £213 per week, no strings attached. The UK government must approve the pilot for it to go ahead.

With furlough schemes making the idea of a guaranteed, state-backed salary seem less radical, the concept of a UBI has edged from the realm of utopian thought, and further into mainstream discourse.

Early results from a recent UBI pilot in Stockton, California, found that the regular payments boosted mental health among participants and improved their chances of getting full-time work.

The US state of Colorado has recorded its first litter of grey wolf pups since the 1940s. The species almost became extinct in the US, but has successfully recolonised the nation thanks to reintroduction programmes.

Colorado voters last year approved a ballot measure to have wolves reintroduced to public land by the end of 2023. The latest news appears to indicate that the species is reintroducing itself.

Jared Polis, the state governor, said that planned reintroductions would mean the “pups will have plenty of potential mates when they grow up to start their own families”.

A ‘forest’ sprung up in an unlikely location in London

A forest has sprung up in the courtyard of London’s Somerset House, a venue that once prohibited trees.

The forest is the centrepiece for this year’s London Design Biennale, which highlights the role that design can play in building a “more resilient and inclusive future” in a world impacted by the climate crisis.

The biennale runs until 27 June. At the end of the event, the 400 trees used in the forest will be donated to London for planting across the city. Read the full Positive News story here.