Assange Turns 50 in Jail–A Reminder of a Western Democracy Paradox He Exposed: Non-Freedom Gives a Sense of Freedom 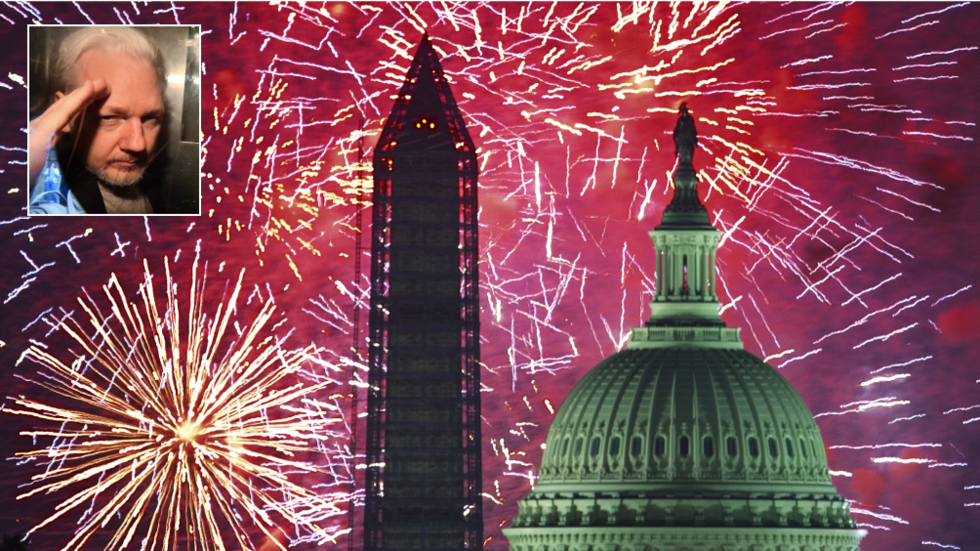 3 Jul 2021 – It’s a twisted irony that the 50th birthday of jailed journalist Julian Assange comes just a day before the US’ Independence Day. That reminds us of the dark aspects of the ‘Land of the Free’ and most of Western democracies.

Today, WikiLeaks co-founder Assange is celebrating his 50th birthday, being held at the Belmarsh maximum-security prison in London as Washington seeks his extradition to the US, where he could be jailed for up to 175 years if found guilty.

Also: Slavoj Zizek — The treatment of Assange is an assault on everyone’s personal freedoms

When Belarus forced a Ryanair plane en route from Athens to Vilnius to land in Minsk in order to detain opposition activist Roman Protasevich, this act of piracy was met by global condemnation. However, we should remember that Western powers did exactly the same in 2013, when the plane carrying Bolivian President Evo Morales was forced to land in Austria. It was done under order of the US, which had alleged that NSA whistleblower Edward Snowden was on board, trying to get from Russia to Latin America. To add insult to injury, Snowden was not on the plane.

Against his will, Assange became a symbol of this dark side of Western democracies, a symbol of our struggle against the new digital forms of control and regulation over our lives which are much more efficient than the old “totalitarian” ones. Many Western liberals point out that there are countries with much more brutal direct oppression than the UK and US – so why such an outcry about Assange? True, but in those countries oppression is open and obvious, while what we are getting now in the liberal West is the oppression which largely leaves intact our sense of freedom. Assange brought out this paradox of non-freedom experienced as freedom.

That’s why all the dirty tricks were used against Assange – a complete character assassination, from describing him as personally intolerable to false accusations about his alleged unlawful sexual activity and lies about him “smearing faeces” on the walls of the Ecuadorian embassy in London. Fearing a principled confrontation with Assange – do I have the right to disclose state secrets when they prove that a state committed murderous crimes? – they descended to the level of personal lies and rumors. The horror of such a procedure is not just that it signals a degradation of political debate – it also targets Assange as an individual. Assange is not just a symbol, he is a living person who has suffered quite a lot in the last decade. Independence Day is usually celebrated with fireworks, parades, ceremonies and family reunions… but one family will definitely not be reunited, that of Assange.

According to a legend (probably no more than that), Neil Armstrong, after making the first step on the Moon on July 20, 1969 and saying his famous “That’s one small step for man, one giant leap for mankind,” were followed by an enigmatic remark: “Good luck, Mister Gorsky.”

Many people at NASA thought it was a casual remark concerning some rival Soviet Cosmonaut. We had to wait till July 5, 1995 when, while answering questions following a speech, Armstrong explained the enigma:

“In 1938, when he was a kid in a small mid-western town, he was playing baseball with a friend in the backyard. His friend hit the ball, which landed in his neighbour’s yard by their bedroom window. His neighbours were Mr and Mrs Gorsky. As he leaned down to pick up the ball, young Armstrong heard Mrs Gorsky shouting at Mr Gorsky, ‘sex! You want sex?! … You’ll get sex when the kid next door walks on the moon!’”

This is what literally happened 31 years later.

More: Assange works for the people – now we need to save him

Upon hearing this anecdote, I imagined a version with Julian Assange. Let’s say that, when he was visited in his prison by his partner Stella Morris and they were separated by the usual thick glass, he dreamt about intimate contact with her, and she tersely replied:

“Sex! You want sex?! … You’ll get sex when you will walk freely on the streets of New York, celebrated as a hero of our time!”

– a prospect no less utopian than to imagine in 1938 that a human will walk on the moon. That’s why we should put all our energy into achieving this goal, with the hope that, sooner than 31 years from now, we’ll be able to say with all sincerity: Good luck, Mr. Assange!

As though nodding to the Rolling Stones song, those in power presume that time is on their side – if they just continue keeping Assange in his status of the living dead, we will gradually forget about him. It is our duty to prove them wrong.