The president promised to return to Obama’s policies of engagement with Cuba, but the embargo and other Trump-era restrictions remain in place. 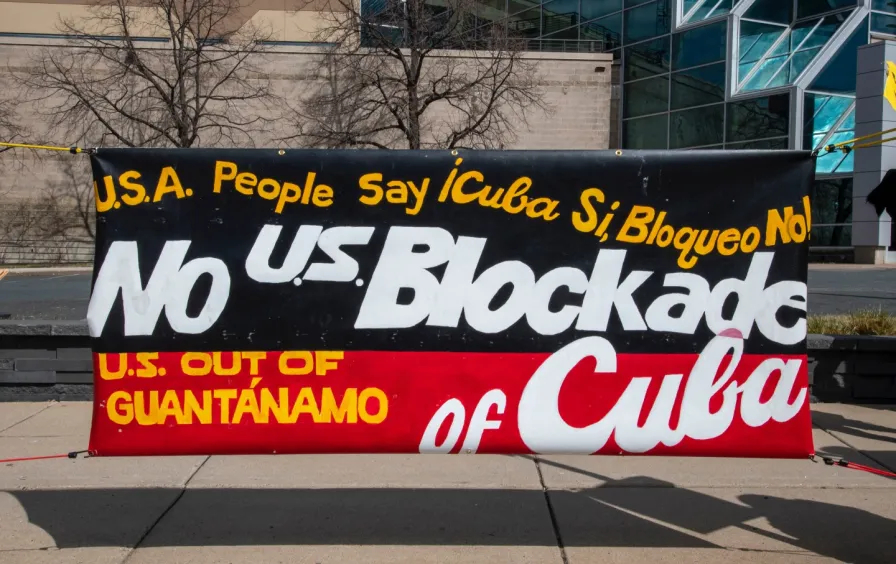 29 Jun 2021 – Imagine a country developing and producing its own Covid-19 vaccines, enough to cover its entire population, but being unable to inoculate everyone because of a syringe shortage. This absurd situation is real, and one that Cuba will soon face. Cuba has already vaccinated about 2 million of its 11 million people, and hopes to have 70 percent of the population vaccinated by August. Yet, because of the 60-year US embargo, which punishes civilians during a pandemic, the country is facing a shortage of millions of syringes.

It makes little sense that a country so advanced in biotech and pharmaceuticals should have trouble sourcing syringes. This reality is a consequence of what amounts to US economic warfare, which makes it extremely difficult for Cuba to acquire medicine, equipment, and supplies from vendors or transportation companies that do business in or with the United States. Syringes are in short supply internationally, so no company wants to be bogged down navigating the complicated banking and licensing demands the US government places on transactions with Cuba.

The irony is that Cuba’s achievements in health are a model and a demonstrable benefit for the entire world—one that the United States should be supporting. This is a country that is developing its economy through health and education—a project that began 60 years ago with rural literacy and health campaigns. Cuba’s public health system has allowed it to outperform much of the world in terms of life expectancy, infant mortality and, most recently, per capita pandemic statistics.

At the beginning of the pandemic, Cuba’s cutting-edge biotech industry shifted rapidly to produce treatments and develop Covid-19 vaccines. At the same time, Cuban doctors, nurses, and other health professionals were deployed to over 40 countries to fight the pandemic on the front lines, helping the world’s poor and underserved populations weather the worst of the crisis. For Cuba, health is not just a right for its own people; it’s a right to be upheld and shared with all peoples.

When the administrations of Barack Obama and Raúl Castro charted a new course toward Cuba-US diplomatic relations, there was hope that an end to the embargo was on the horizon. President Obama engaged the Cuban government to establish full diplomatic relations, eased restrictions on travel and remittances, removed Cuba from the state sponsors of terror list, and expanded US exports to the nation.

All of this progress was undone by the Trump administration, which tightened sanctions on Cuba in the middle of the pandemic. On top of that, it pressured US allies in Latin America, notably Brazil and Bolivia, to expel Cuban doctors. There is no doubt that these decisions cost lives.

On the first day of the new administration, President Biden issued a national security directive calling for a review of the impact of sanctions on the response to the pandemic, with an eye toward offering relief. Hope for a sensible US policy toward Cuba was once again kindled. Now, almost half a year into the Biden administration, the Trump-era policies of “maximum pressure” remain in place. The White House has made it clear that improving Cuba-US relations—and with them, the daily lives of the Cuban people—is not a priority. Hope is quickly turning to indignation among US and Cuban citizens alike who believed Biden’s promises to reverse the Trump administration’s policy of threats, interference in Cuban internal affairs, and obstruction of access to basic human needs.

The Biden administration is facing mounting pressure from Congress to take decisive action and put us on a path toward peace and friendly relations with Cuba. In March, 80 US congressional representatives sent a letter to the president, urging him to reverse the Trump administration’s policies. More than 100 organizations, from the American Public Health Organization to Amnesty International, made a similar request to Biden. On the grassroots level, activists have organized monthly car caravans in over a dozen cities to demand an end to the embargo. Civil society organizations and social movements have raised over $400,000 to send syringes to Cuba.

If human rights are to be a core pillar of US policy, as a White House spokesperson recently declared, then the embargo must end. It is a policy that indiscriminately targets and harms civilians. It is a systematic violation of human rights on a massive scale.

Secretary of State Antony Blinken’s eloquent speeches about a rules-based international order ring false when it comes to US Cuba policy. Under international law, the US embargo of Cuba is illegal. Since 1991, the United Nations General Assembly has held a yearly vote to adopt a resolution calling for an end to the embargo. Every year, the United States finds itself isolated as nearly every country in the world votes in favor of this resolution. This year was no different: The June 23 vote showed 184 nations against the embargo, with only the United States and Israel in favor.

If he truly wants to show global leadership, Biden should reverse a policy that isolates the United States, not merely Cuba. Instead of following Trump’s belligerent path, he should return to Obama’s pathbreaking efforts towards normalization. He should applaud and facilitate Cuba’s pledge to produce 100 million doses of its vaccines, which it will share with the world. As the pandemic continues to ravage the Global South, the world needs the United States’ cooperation with Cuba, not confrontation.