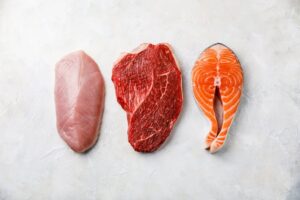 12 Jul 2021 – Bacon and eggs for breakfast, a turkey sandwich for lunch, and roasted chicken for dinner are some of the go-to meal choices in America where meat is considered an essential part of the everyday diet.

Historically, Americans have been led to believe that eating meat and other animal products is necessary to be strong and healthy. This belief was ingrained in most Americans from the moment they were born. The food industry has continuously pushed consumption of these products through ad campaigns that proclaim, “Beef. It’s what’s for dinner,” and “Milk. It does a body good.” An article in Nourish by WebMD raves about chicken’s supposed health benefits, and poultry has appeared in every food guide by the United States Department of Agriculture since the 1940s. Americans have been led to believe that if they forgo these staples of the Westernized diet, they will dissolve into anemic zombies.

In truth, not only is meat consumption not necessary for humans to stay healthy, but it’s also potentially quite harmful. Consider meat’s links to heart disease, diabetes and certain cancers. Or the millions of people who fall sick from listeria, E. coli, and salmonella each year due to the consumption of contaminated meat. Or the more than 2.8 million Americans who contract antibiotic-resistant infections—which is a result of a nasty upshot of the rampant use of antibiotics on factory farms.

Americans eat more meat per capita than any other country, according to the World Economic Forum—which referred to the 2016 figures of the Organization for Economic Cooperation and Development-Food and Agriculture Organization Agricultural Outlook 2017-2026—but meat consumption hasn’t been a boon for the health of Americans. There is a high prevalence of obesity and diabetes and one of the highest rates of cancer among the American population. In light of these numbers, saying meat is essential makes about as much sense as saying cigarettes are essential.

Unfortunately, the notions that we can’t live without meat and that our meat supply is sacrosanct have been even further entrenched during the COVID-19 global pandemic. Thanks to intense lobbying by industrial meat producers in 2020, the U.S. government had deemed meatpacking and slaughterhouse workers “essential.” While many small businesses were crippled or had to shut down in order to stem the virus’s spread during the peak of the COVID-19 outbreak in the U.S. in 2020, the federal government forced slaughterhouses to stay open—this was despite the soaring coronavirus infection rates and employee deaths. A single Smithfield plant in Sioux Falls was linked to at least 1,294 coronavirus cases and four deaths in the spring of 2020, according to an article in National Hog Farmer. In Louisa County, Iowa, which is home to a Tyson plant, 1,301 of the 11,223 residents contracted the virus by July 2021.

Indeed, an insistence on consuming copious amounts of meat poses a grave threat to the very survival of our species. In our mad dash to curtail the virus and develop vaccines at warp speeds, we’ve overlooked—perhaps intentionally—one foundational, inconvenient fact: COVID-19—the source of which has been traced to a live animal market in Wuhan, China—is only the latest in a long line of pandemics that have arisen from our insistence on eating meat:

In short, nearly every epidemic or pandemic in human history has been caused by animal-origin pathogens spilling over to people, usually as a result of the myopic quest for meat by humans.

The proliferation of industrial farms—which often cram tens of thousands of chickens into a single shed—has only made things worse. “If you actually want to create global pandemics, then build factory farms,” says Dr. Michael Greger, in his book “Bird Flu: A Virus of Our Own Hatching.” The situation has become so dire and the threat to public health so acute that in the spring of 2020, a group of Chicago doctors called for a “global moratorium” on the consumption of meat. Given the facts before us, who can blame them?

As we ponder ways to enhance our well-being in the years ahead, it’s crucial to acknowledge with clear eyes the detrimental effects that consumption of meat has on our bodies and even our species at large. A plant-based diet (which, thankfully, is in higher demand these days) can deliver all the protein, fat, and calcium we need, while also reducing the risk of cancer, heart disease and diabetes—three of America’s leading causes of death, and which have all been connected to meat consumption. If adopted broadly, it could even preclude the next global pandemic.

The myth that meat is essential is a deadly one. To bring about a future that’s healthier and safer for everyone, it’s time to leave chicken, beef, fish and other animal products off our plates.

Jennifer Barckley is the vice president of communications at The Humane League.

Anticopyright: Editorials and articles originated on TMS may be freely reprinted, disseminated, translated and used as background material, provided an acknowledgement and link to the source, TMS: The Myth That Meat Is Essential for Human Health Could Harm Us All, is included. Thank you.