US Imperialism’s Criminal Debacle in Afghanistan

7 Jul 2021 – US troops pulled out of the sprawling Bagram Air Base at three in the morning last Friday [2 Jul], without notifying the Afghan government forces meant to replace them, and cutting off the power on the way out, an act that triggered an invasion of the base by a small army of looters.

This ignoble retreat is a fitting symbol of the debacle wrought by 20 years of US war and occupation in Afghanistan. Bagram, built by the Soviet military in the 1950s and vastly expanded by the Americans, was at the heart of US imperialism’s two-decade-long criminal war of aggression.

Hundreds of thousands of US personnel passed through the base in the longest war in US history. From Bagram, US warplanes carried out bombing campaigns that claimed the lives of countless thousands of Afghan civilians, and special forces kill teams launched raids in which entire families were wiped out. The base, moreover, housed the Parwan Detention Facility where thousands of suspected insurgents were imprisoned and the methods of “enhanced interrogation”, i.e., torture were employed. Prisoners were beaten, attacked by dogs, shackled to the ceiling, subjected to sexual humiliation and sleep deprivation, and, in some cases, tortured to death. 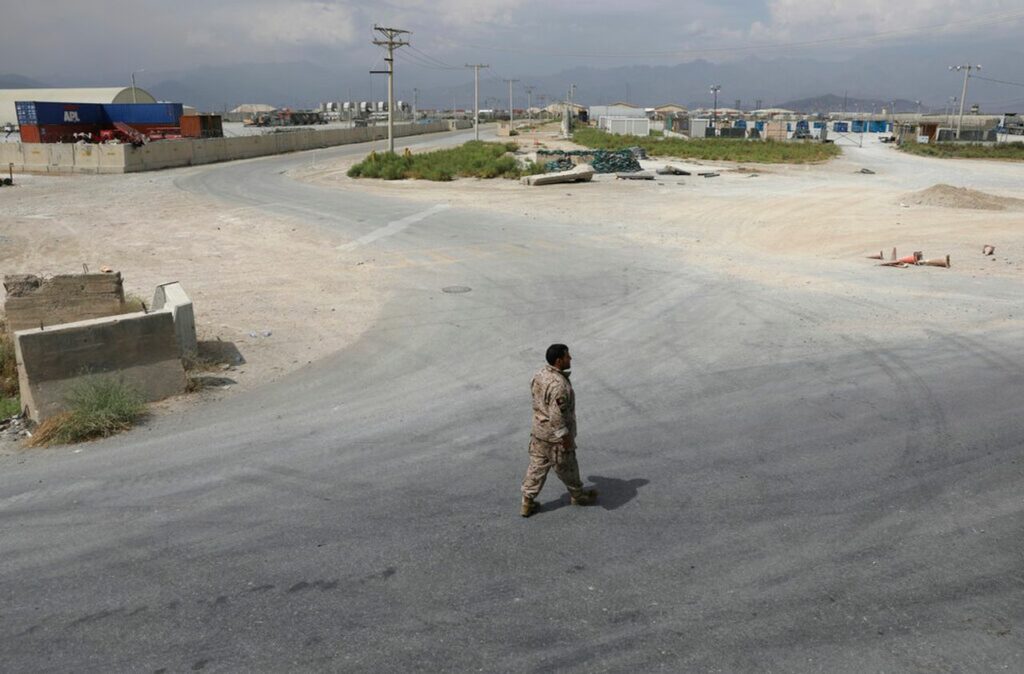 A member of the Afghan security forces walks in the sprawling Bagram air base after the American military departed. Kabul, Afghanistan, July 5, 2021.
(AP Photo/Rahmat Gul)

Bagram was abandoned in the midst of an unmitigated rout of Afghan security forces at the hands of the Taliban insurgency. The Taliban has overrun roughly a quarter of the country’s districts in the space of a few weeks–in addition to the territories it already controlled. Government soldiers have handed over bases and stockpiles of US-supplied weapons and, in some cases, joined the Islamist fighters. Monday saw more than 1,000 government troops flee across Afghanistan’s northeastern border into the former Soviet republic of Tajikistan to escape the fighting.

This rout, which seems to confirm the worst-case scenario prepared by US intelligence agencies that Kabul could fall within six months of a US withdrawal, has touched off an increasingly bitter “who lost Afghanistan” dispute in Washington. Right-wing Republican politicians have indicted the Biden administration, while proclaiming their deep concern for the rights of Afghan women. Biden’s supporters have in turn pointed out that it was the Trump administration that signed the agreement with the Taliban in Qatar in February 2020 mandating the US pullout.

The reality is that the United States lost Afghanistan over the course of its two-decade colonial-style occupation, which provoked intense opposition and anger within the Afghan population.

It is conservatively estimated that 175,000 civilians have been killed in the war. If those dying as a result of the conditions of mass displacement and the general destruction of social conditions were to be added, the total doubtless would climb to well over a million.

The US intervention began with a horrific war crime: the mass execution of over 2,000 Taliban prisoners who were suffocated or shot to death in shipping containers after surrendering to US special forces and their Northern Alliance proxies in November 2001. The US war, obscenely dubbed “Operation Enduring Freedom,” produced an unending series of such crimes against the Afghan population. According to conservative estimates, over the past five years alone, some 4,000 Afghan civilians have been killed in US and allied airstrikes, including nearly 800 children.

The empty promises that the US occupation would bring the Afghan people democracy and prosperity have been exposed as a fraud. The puppet regime in Kabul, the product of rigged elections and deals with criminal warlords, lacks any legitimacy. After 20 years of US aid, Afghanistan still ranks 169th (out of 189 countries) on the UN’s Human Development Index, behind most of sub-Saharan Africa.

The US spent $143 billion on Afghanistan’s “reconstruction”, a sum that is greater, adjusted for inflation, than what Washington spent on the entire Marshal Plan for the reconstruction of Western Europe after World War II. This money has produced neither any significant improvement in the lives of the vast majority of Afghans, nor any development of basic infrastructure. It has gone overwhelmingly to line the pockets of one of the most corrupt kleptocracies on the planet, including the military command, which has stolen soldiers’ pay and supplies, contributing mightily to the ongoing collapse of the security forces.

The war’s costs for the United States, besides the trillion dollars spent to fight it, are measured in the deaths of 2,452 US military personnel, along with those of 455 British soldiers and 689 from Canada, France, Germany, Italy, Poland, Denmark, Australia, Spain and other countries. Thousands of military contractors also lost their lives. There are many among the three-quarters of a million US troops who deployed at least once to Afghanistan who returned maimed or mentally scarred by the dirty colonial war.

With the US withdrawal, the question arises: what justified this sacrifice? The claim that the war was waged to protect the American people from Al Qaeda terrorism is a patent lie. It continued for more than nine years after Osama bin Laden, sick, isolated and under house arrest by Pakistan’s ISI military intelligence agency, was executed by a Navy Seal squad. During that period, Washington funded and armed Al Qaeda elements for its wars of regime change in Libya and Syria.

Moreover, the tragic encounter between the people of Afghanistan and US imperialism began not in 2001, but more than two decades earlier, when the CIA, collaborating with Saudi Arabia and Pakistan, mobilized Islamist fighters from throughout the Muslim world for a proxy war against Soviet forces supporting a secular government in Kabul. Among the CIA’s closest collaborators was bin Laden, who founded Al Qaeda with the backing of the US intelligence agency.

The Washington Post editorialized: “U.S. rivals such as Iran, China and Russia could draw the conclusion that Mr. Biden lacks the stomach to stand up for embattled U.S. allies such as Iraq, Taiwan and Ukraine.”

The Wall Street Journal pointed to “strategic costs” of the withdrawal, stating “An American presence in Afghanistan, including at the large air base at Bagram, has given pause to both Iran to the west and China to the east. A significant American presence in that strategic spot provided at least a bit of a check on Iranian aggression and Chinese expansionism.”

An article by Lt. Col. David Clukey, a retired US Army Special Forces officer, which appeared on the website of the Naval War College, warned that the withdrawal would give “communist China … an opportunity to undermine 20 years of US efforts while simultaneously enabling People’s Republic of China (PRC) advisors and military forces strategic access and influence in South-Asia – a move that would strengthen deterrence against U.S. military intervention in the region.”

What these statements make abundantly clear is that the disputes over the Afghanistan withdrawal are rooted not in fears of terrorism, much less concerns for women’s rights, but rather the geostrategic interests of US imperialism, particularly in relation to its intensifying confrontation with China.

On October 9, 2001, two days after Washington launched its invasion of Afghanistan and in the teeth of a ferocious propaganda campaign by the US government and the corporate media to sell the war to the American people as revenge for 9/11, the World Socialist Web Site posted a statement titled “Why we oppose the war in Afghanistan.” It exposed the lie that this was a “war for justice and the security of the American people against terrorism” and insisted that “the present action by the United States is an imperialist war” in which Washington aimed to “establish a new political framework within which it will exert hegemonic control” over not only Afghanistan, but the broader Central Asian region, “home to the second largest deposit of proven reserves of petroleum and natural gas in the world.”

The WSWS stated at the time:

The United States stands at a turning point. The government admits it has embarked on a war of indefinite scale and duration. What is taking place is the militarization of American society under conditions of a deepening social crisis.

The war will profoundly affect the conditions of the American and international working class. Imperialism threatens mankind at the beginning of the twenty-first century with a repetition on a more horrific scale of the tragedies of the twentieth. More than ever, imperialism and its depredations raise the necessity for the international unity of the working class and the struggle for socialism.

These warnings have been fully confirmed over the course of the last 20 years, as US imperialism has waged new and equally criminal wars and military attacks from Iraq to Libya, Syria, Somalia and Yemen, while erecting the scaffolding for a police state within the United States itself.

While there is deep hostility to these wars within the American population, these anti-war sentiments have been repeatedly suppressed and diverted behind the Democratic Party. It regained control of both houses of Congress in 2006 and won the presidency for Barack Obama in 2008 on the back of these sentiments, only to continue and expand America’s wars, including through Obama’s “surge” in Afghanistan.

Whether Biden’s troop withdrawal signals an end to US imperialism’s four decades of death and destruction in Afghanistan remains to be seen. The US military and intelligence apparatus is developing an “over the horizon” capacity to continue bombings, drone strikes and special forces interventions, while the State Department is casting about for new bases in the former Soviet republics of Central Asia.

The bid by both Biden and Trump to end the US military occupation of Afghanistan is bound up with preparations for a far more dangerous eruption of US militarism, as Washington shifts its global strategy from the “war on terrorism” to preparations for war against its “great power” rivals, in the first instance, nuclear-armed China and Russia.

Ensuring the end of the 20-year war in Afghanistan and stopping the eruption of new and even more catastrophic wars requires the independent political mobilization of the working class in the US and uniting its growing struggles with those of workers in Asia, the Middle East, Europe and internationally in a socialist anti-war movement. Without the revolutionary intervention of the working class, the threat of a nuclear third world war will only grow.

Bill Van Auken is the Latin American editor of the World Socialist Web Site and a member of the National Committee of the Socialist Equality Party in the United States. He has written and lectured on the history of the Trotskyist movement in Latin America, and has written extensively against the operations of US imperialism around the world.