What Is Critical Race Theory?

And why are racists afraid of it? 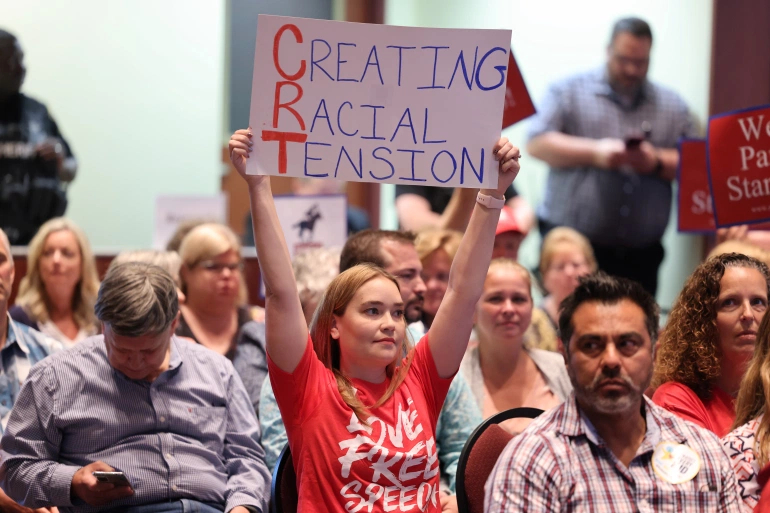 29 Jun 2021 – The culture of settler-colonial societies, of people coming from across the world and overpowering the original inhabitants of a vast or small territory to form a garrison state around themselves, has enduring and insurmountable maladies and misanthropies. This does not mean people in England, France, Turkey, Iran, India, or China do not have their own sedentary predicaments. They do. But those predicaments are of a different genealogy.

One thing settler colonialists do is act as if they are the native inhabitants of the lands they violently conquered, and brand all those who come after them as “immigrants”. They engage in a strange, possessive type of historiography, in an effort to convince themselves and the world that they have a righteous claim to the land they stole.

Fully aware of their recent origins, these settler colonialists feel threatened and start acting strangely every time there is a rise in critical awareness about who’s who and what’s what in the land they claimed as theirs and theirs alone.

And this is exactly what is happening today in the settler colony we call the United States of America.

So often you wake up in this strange habitat to find the inherently racist settler colonists having a tantrum about a word, a mantra, or something they perceive as a magical spell that could suddenly and irrevocably delegitimise their origin myths. These days, it is “Critical Race Theory” and, given their bizarre obsession with abbreviations, they are referring to it as “CRT”.

Right now, in their eyes, “CRT” is profanity, a curse word. It represents the latest attack on their sense of self, their “homeland”.

It does not really matter. It means what Donald Trump told them it means. It means a bad thing. It means white people are in danger. It means if Americans do not re-elect Trump, or another equally reactionary and racist Republican, then Black people, Latinx, feminists, Marxists, Jews, Muslims, gays, transgender people and all those godless commies will come and take over their country.

Critical Race Theory – a school of thought that holds that major institutions in the US are inherently racist and constructed by their nature to perpetuate white supremacy – would have remained an entirely obscure academic preoccupation were it not for Trump and his all-out bigoted warfare to win a second term. Today, Critical Race Theory is a discussion topic in the US only because Trump decided to attack it for exposing his and his supporters’ incurable racism.

In September 2020, as Trump was trailing Joe Biden in most opinion polls, the Office of Management and Budget issued a directive: “All agencies are directed to begin to identify all contracts or other agency spending related to any training on ‘critical race theory,’ ‘white privilege,’ or any other training or propaganda effort that teaches or suggests either (1) that the United States is an inherently racist or evil country or (2) that any race or ethnicity is inherently racist or evil.”

So there you have it: if you tell the truth and expose the structural roots of racism in this country, then you are in trouble and the federal government will come after you.

Using the federal government and its enormous power to curtail critical thinking of any sort of course did not start with Trump. About two decades earlier, American Zionists used the same tactic to try and silence criticism of Israel in US universities. Their main target then was Edward Said and his critical scholarship.

In October 2003, as Michelle Goldberg explained in the Salon, the US House of Representatives “unanimously passed a bill that could require university international studies departments to show more support for American foreign policy or risk their federal funding. Its approval followed hearings [that] summer in which members of Congress listened to testimony about the pernicious influence of the late Edward Said in Middle Eastern studies departments, described as enclaves of debased anti-Americanism.”

The same forces that tried to ban Edward Said’s scholarship, and any other form of critical thinking that exposes the roots of fundamental injustices crippling the US and the world, have now turned their attention to Critical Race Theory – an idea that has been around for decades and which seeks to expose and dismantle the underlying social forces that frame racism, without allowing it to be reduced to individual acts of racism on daily display by the likes of Trump, Benjamin Netanyahu, Emmanuel Macron, or Boris Johnson.

The proposition that legal, political, and even educational systems are among the ideological forces at work to sustain the class structure of a society are of course much older than Critical Race Theory and go back at least to the eminent Italian Marxist theorist Antonio Gramsci’s notion of “hegemony” and before him in Marx’s seminal text on German Ideology.

We can go back further to Nietzsche and from there all the way to Thrasymachus’s iconic encounter with Socrates in the first book of Plato’s Republic, in which he disrupts Socrates’s arguments regarding “justice” by defining it as the will of the powerful.

So the scholars engaged in Critical Race Theory did not invent critical thinking or even employ it for the first time to dissect racism. The significance of Critical Race Theory at this particular juncture in American history is the way a sustained course of the theoretical groundwork now informs a massive social movement known as Black Lives Matter. This fruitful dialectic between an academic theory and a grassroots social uprising is what frightens the custodians of the status quo who are fighting tooth and nail to protect and preserve their race and class privileges. It is class warfare, pure and simple. Those who identify as “white” wish to protect the privileges they automatically obtain by merely being “white”, and categorically oppose any critical awareness of the terror they systematically and consistently inflict on those who are subjected to their power.

The way Critical Race Theory came to prominence was not that different to the ways in which other academic movements and fields came to be commonly known and discussed. A landmark event in the widespread reception of Critical Race Theory was the publication in 2001 of Richard Delgado and Jean Stefancic’s book, Critical Race Theory: An Introduction, detailing the origins, key themes, and the leading voices in the field. The authors subsequently revised and updated the book to include more recent developments.

Like the fields of Liberation Theology, or Subaltern or Postcolonial studies before it, Critical Race Theory too is not the cause of but a response to existing social realities – realities that needed detailed historical and theoretical articulations. Defunding, censoring or demonising a field of scholarship will not erase the social conditions that gave birth to it in the first place. It in fact proves its importance and legitimacy.

Consider the fact that US Senate Republicans just voted to block major legislation that had sought to secure the voting rights of non-white Americans. In doing so, they proved the underlying veracity of Critical Race Theory. It is class warfare, of rich people mobilised against poor people, with a specific racial twist to it.

Defunding the study of racism is now actively on the Republican agenda. Just last month, Representative Dan Bishop of North Carolina introduced what he calls “Stop CRT Act and the Combatting Racist Training in the Military Act”, which, as he explained in a press release, “would ban federal funds from being used to promote and teach Critical Race Theory (CRT) and stop our military members from being subject to it as well.”

“Critical Race Theory is a poison to the psyche of our nation,” Rep Bishop claimed. “This destructive ideology has no place in America’s institutions, and the bills I’m introducing will help ensure that our government isn’t spending resources on promoting it.” He argued that the Biden administration is aided and abetted by “the radical Left” and is “committed to pushing this neo-Marxist propaganda into our classrooms, places of work, and even the military.”

These powerful Republican politicians are targeting public schools in particular because that is where most common lower- and middle-class people and their children are in direct contact with poorer communities. They do not mind if private schools and rich communities are exposed to any “radical ideas” – because their wealth and privileges compromise their learning. But in lower- and middle-class communities and public schools, these ideas resonate with the realities both students and their parents and teachers live. That means the eventual transformation of the critical consciousness of people.

Demonising, censuring, censoring, defunding, and even criminalising Critical Race Theory will not erase the systemic racism at the roots and extended into the branches and the bitter fruits of this country’s history and current realities. If you do not allow the defiance against that racism to reason and articulate itself, it will sing, it will dance, it will scream, it will protest and march itself into the streets and squares of this and all other nations. For, facts always rise valiantly to meet any truthful theory.

Hamid Dabashi is the Hagop Kevorkian Professor of Iranian Studies and Comparative Literature at Columbia University. He received a dual PhD in Sociology of Culture and Islamic Studies from the University of Pennsylvania in 1984, followed by a postdoctoral fellowship at Harvard University. He wrote his dissertation on Max Weber’s theory of charismatic authority with Philip Rieff (1922-2006), the most distinguished Freudian cultural critic of his time. He has taught and delivered lectures in many North American, European, Arab, and Iranian universities and has written twenty-five books, edited four, and contributed chapters to many more.