Capitalism Is What’s Burning the Planet, Not Average People

Not all humans are equally culpable in the climate chaos outlined in the 9 Aug  IPCC report. Identifying the rich and powerful as the principal culprits is key to stopping further destruction. 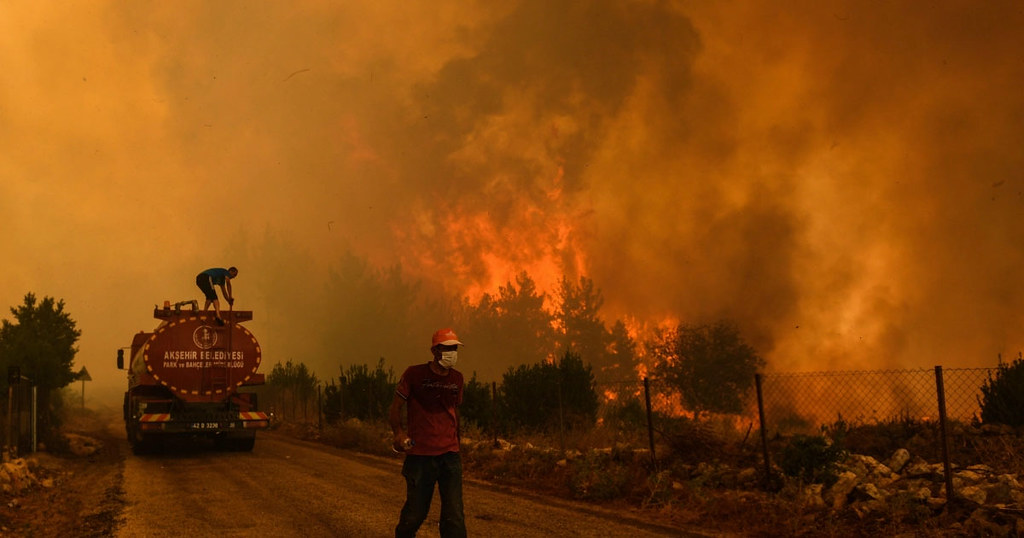 11 Aug 2021 – Every seven or eight years, the Intergovernmental Panel on Climate Change (IPCC) publishes its latest report reviewing the available science assessing the state of climate change. The most recent, the Sixth Assessment Report, was published this week in the midst of a summer of extreme heat and devastating flooding.

These reports feel like landmark moments in the history of climate change. While politicians, corporations, and activists make little to no progress endlessly arguing, scientists cut through the bullshit with a sober and objective picture of where we’re at and what more there is still to do.

So, what new information does the latest IPCC report give us to aid in the fight against climate change? On a fundamental level, not much. Emissions are still rising, and the planet is still heating. We still need to decarbonize the economy as a matter of urgency.

The Sixth Assessment Report’s headlines tend to focus on the widely vaunted target to limit global average temperature rises to 1.5oC. This target was the cornerstone of the Paris Agreement and is upheld by climate wonks as the limit past which warming becomes unsafe. In reality, the target is crude: we have already reached 1.1 or 1.2oC of warming, and our current climate can hardly be described as safe.

Regardless, the international community has cohered around 1.5oC as a collective ambition, for better or worse. Among the most striking headlines of the IPCC report was that, in all scenarios modeled, we will hit that level by 2040. That point will come much sooner (around a decade from now) if we don’t start bringing emissions down fast.

If there is optimism in the IPCC report, it’s that if we achieve net-zero emissions by 2050 globally, there is a good chance of stabilizing temperatures at 1.5oC. Of course, the bad news is that this would still be a much more dangerous climate than today’s — and that the optimistic scenario is certainly not the most likely. The model of a higher-emissions scenario would take us to 1.9oC by 2040 (at which point I will be forty-six years old), 3oC by 2060 (at which point I am unlikely to have yet retired), and 5.7oC by 2100 (at which point I could be 104, if the extreme heat doesn’t kill me first).

These numbers underline what my generation is facing in our lifetime if we do not change course, though it’s nothing we didn’t know already. António Guterres, the secretary-general of the United Nations, responded to the report by taking aim at the fossil fuel industry: “This report must sound a death knell for coal and fossil fuels, before they destroy our planet.”

This has become a self-evident truth for all concerned with climate change, but simply making the statement is no longer enough. Less than three months before the delayed COP26 conference in Glasgow, can we really say we expect this one to be any different? The previous two major conferences produced nothing at all: COP15 in Copenhagen in 2009, and COP21 in 2015 (the Paris Agreement), which only committed nations to voluntary emissions reductions targets that would guarantee about 2.9oC of warming if achieved. Glasgow is shaping up to be no less of a failure.

This report is as stark as any other, but it gives us no new reason to believe that established international processes and current governments are prepared to coordinate the global economic shift we urgently need. John Kerry, the United States special presidential envoy for climate, says that Glasgow must be a “turning point in this crisis.” We’ve heard it all before. The only turning point we can bank on now is away from a capitalist political economy, which has produced and entrenched this crisis, and toward a new economy based on equity, justice, and shared prosperity.

The science of the Sixth Assessment Report cannot be disputed, and the potency of its implications give us impetus to question the suitability of our current political and economic system. However, the report doesn’t go so far as to ask those questions itself. In fact, throughout the report, we can see language that functions to uphold the dominance of the ruling class.

The first statement in the “Summary for Policymakers” claims that climate change is “unequivocally caused by human activities.” The phrase “human-induced climate change” appears throughout the report. The certainty of humanity’s responsibility for the climate crisis thus became a prominent headline in media reporting, including in stories published by the BBC and the Guardian.

Unlike the IPPC report’s assessments of likely degrees of warming, anticipated extreme heat, and predicted sea level rises, the suggestion that humanity in general is to blame is not a scientific claim. It is an ideological one. In this instance, it insulates the ruling class from blame.

This is unlikely to be the explicit intention of the scientists at the IPCC. The popular tendency to talk about human-caused climate change is surely a response to well-funded climate denial. However, climate denial is now no longer the main blockage — instead, it’s the delay and inaction of the capitalist class.

It is capitalists who profit from the climate crisis while the poorest suffer. It is the capitalist system putting profit above all else that blocks decarbonization while the world burns. Of course, it is technically correct to say that climate change is human-induced. As far as I know, the capitalist class are all human (unless David Icke knows something we don’t). But this doesn’t mean that all humans have played a role in producing the crisis.

True, some of us benefit materially from the fruits of fossil capitalism. It’s unavoidable that fossil fuel extraction has been the basis of modern civilization and provided improvements to many lives. But most people are also exploited, alienated, and marginalized within this system. We consume the carbon-intensive products of capitalism, but we have no say about the fundamental conditions of production that are driving our climate to breakdown.

A worker on an oil refinery does not share culpability with the capitalist who exploits them to profit from oil production. Indigenous communities violently displaced from their land to make way for a coal mine do not share blame with the governments forcing these projects through. We might as well talk about mammal-induced or earthling-induced climate change. It would be just as true, only at an even further level of abstraction from the real culprits.

It would, of course, be true to say that climate change is not necessarily unique to the capitalist mode of production. To briefly engage in a counter-history, it is surely true that any human civilization to have discovered fossil fuels would have harnessed them and inadvertently set the wheels of climate change in motion. The unique malice of capitalism, though, is in its inability to reverse the trend. We have now known about the causes and effects of climate change for several decades, yet capitalism’s priority of maximizing short-term profits has crowded out the need to transition our energy system.

We are not all equally responsible for climate breakdown. Our individual behaviors, even taken in aggregate, cannot propel rapid and just decarbonization without a planned transformation of the economy. We can either choose to indulge in a misanthropic climate politics that puts humanity in general on the hook while obfuscating the true cause of the crisis — or we can embrace a humanist and socialist vision of climate justice that tells a story of human potential and the possibility of a better world, making the best of the climate we inherent.

If 1.5oC of warming is the best we can aim for, and if, as the Sixth Assessment Report tells us, so many changes to the climate are now inevitable and irreversible, then the current wildfires in Greece, Turkey, and Algeria are just the beginning of a new normal. In this context, we will need to unlock the best features of humanity rather than emphasizing the worst. As well as fighting against every fraction of a degree of warming, we should also accept the permanence of an even more dangerous climate than that which we currently inhabit. This is where the principles of solidarity and justice become so crucial.

Our primary mission is to limit warming by decarbonizing as quickly and equitably as possible. We should also consider how we adapt to this new climate. The Left and the climate movement should demand, and integrate into our own political platform, a program of just adaptation to climate change. We need to see resilient buildings and infrastructure, flood defenses, evacuation plans, well-funded emergency services, state-guaranteed insurance to cover loss and damage, and policies to accept and support refugees. These cannot be the end point of our political ambition or act as an excuse to abandon the fight for decarbonization, but they must factor into any vision of justice in a world of 1.5oC.

As the IPCC report makes clear, there are multiple scenarios of warming over the coming decades. Implied in some of these is a failure of both governments and climate movements to bring emissions down on the timescale required. Of course, our ambition should be to capture state power and use it to transform the economy and bring about justice. We should also be prepared to operate within scenarios where politicians uphold the status quo and do not decarbonize, or where decarbonization happens to the benefit of the rich while sacrificing the poor and marginalized. In these scenarios of relative defeat, we must be prepared to defend ourselves by building power and solidarity in our communities. We should be prepared with collective resilience for when the state fails us by setting up robust systems of food distribution, emergency shelter, and rescue.

It is understandable that moments like these, when IPCC reports are published amid relentless and devastating extreme weather, induce a collective sense of despair, anxiety, and powerlessness. The entirety of my working life will, in most of the IPCC’s modeled scenarios, happen in the context of a heating planet. We should acknowledge and respect these feelings without letting them slip into hopelessness or misanthropy.

Despite what the media, the ruling class, and even the scientists tell us, “we” are not to blame for the climate crisis. But those who are to blame don’t plan to do anything meaningful about it — so it’s up to us anyway. In that knowledge, we can form a militant and radical mass movement prepared to build a new economy based on equity, justice, and shared prosperity. We know we will have to live with the legacy of fossil capitalism regardless, but we can be sure to consign it to history.

Chris Saltmarsh is a cofounder of Labour for a Green New Deal.